Jalaj Saxena hasn't done great in the last couple of matches. He can be left out for a specialist bowler who can earn crucial Dream11 Fantasy points by picking wickets.

The Round 7 match of Group B in Syed Mushtaq Ali Trophy 2019-20 will be played between Kerala and Uttar Pradesh at the Greenfield International Stadium in Thiruvananthapuram.

Kerala and Uttar Pradesh will lock horns on Sunday which will decide their fate in the tournament. Both the teams should win this match and also hope for Rajasthan and either of Tamil Nadu or Vidarbha to lose their respective matches. Rather TN and Vidarbha will be facing in the morning and both of them are at the top in the group B. Rajasthan is at the third position and have better NRR than both Kerala and UP.

Kerala has a better chance to make it to the top two and qualify for the Super League compared to UP thanks to their positive NRR. However, it seems tough for Tripura to beat Rajasthan who have been bowling well this season. Interestingly, before the start of the match itself, the fate of the two teams will be decided as TN v Vidarbha and Rajasthan vs Vidarbha games are in the morning.

The forecast is not so encouraging for this crucial game in Thiruvananthapuram on Sunday. It will stay cloudy throughout the day and there is a 15% chance of rain at 1 PM. Things only get worse by 4-5 PM with the chances of rain with thunderstorms increasing to 50% according to AccuWeather.

The surface at the venue has been good for batting. Though the last two matches at 1:30 PM have been extremely low scoring, those were between the two unmatches sides. Kerala and UP look evenly matched on paper and it should be a good contest in the middle, weather permitting. With the VJD method and NRR likely to come into play, the team winning the toss is likely to bowl first.

Sanju Samson and Robin Uthappa are crucial for Kerala’s fortunes and should be your top picks for Dream11 Fantasy. Also, Jalaj Saxena will be important with his all-round skills. For UP, Akshdeep Nath should lead the way while Ankit Rajpoot and Rinku Singh can also make the difference. 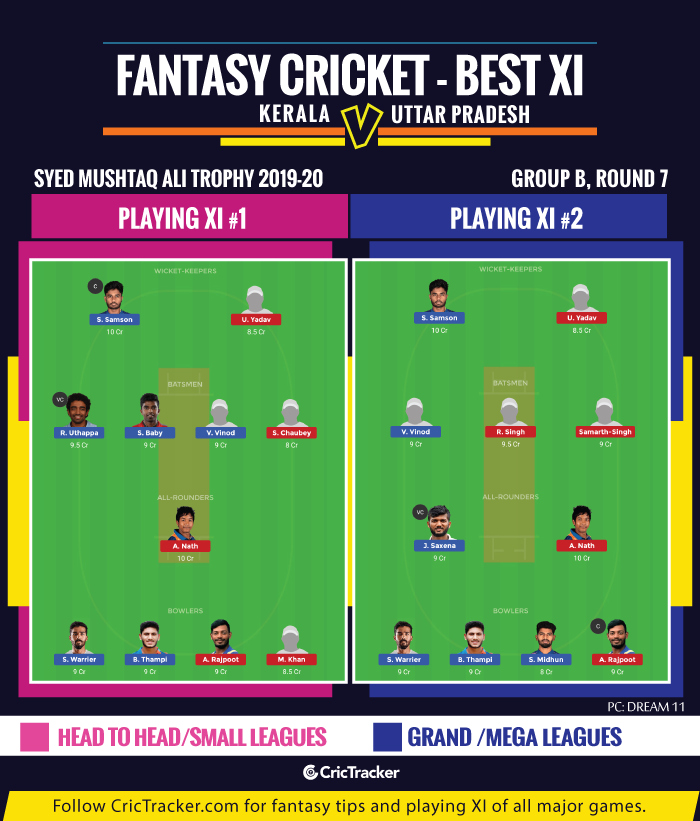 Jalaj Saxena hasn’t done great in the last couple of matches. He can be left out for a specialist bowler who can earn crucial Dream11 Fantasy points by picking wickets.

Kerala is expected to win the match.