If Tripura were to bat first, picking three of four UP bowlers should do the trick.

The Round 4 match in the Group B of the Syed Mushtaq Ali Trophy 2019-20 will be played between Tripura and Uttar Pradesh at the St Xavier’s College Ground, Thiruvananthapuram.

Round 4 of the Syed Mushtaq Ali Trophy 2019-20 pits Uttar Pradesh against Tripura in Thiruvananthapuram. Uttar Pradesh didn’t begin their campaign on the right note as they succumbed to a defeat in their opening fixture. In spite of their false start, UP has been one of the more consistent teams in the competition over the years.

However, they come across a Tripura side that has been making great progress in the last year or so. Led by Manisankar Murasingh, Tripura has played two matches so far. They have won one and lost won which makes this match a must-win for either side to keep their hopes of qualification alive.

On paper, Uttar Pradesh trumps Tripura in terms of quality and experience. Led by Ankit Rajpoot and Kuldeep Yadav, UP’s bowling unit is key to their fortunes while the experience of Akshdeep Nath should give UP the edge heading into this game. Despite the clear gap in quality, Tripura isn’t one to be taken lightly and certainly have the ability to compete with UP on Tuesday.

There isn’t any threat of rain for this game with cloudy conditions set to engulf the stadium. A cloud cover of 41% and humidity of 75%, as per AccuWeather, is expected with the temperature expected to hover around 28-30 degrees Celsius.

The St. Xavier’s College Ground has seen fairly competitive games this season. While teams prefer to bat first here, the spinners get ample turn as the game progresses. With the average first innings score being 160 this year, a decent batting pitch awaits for this contest between Tripura and UP.

Kuldeep Yadav might join the Indian team for the upcoming Test series and hence is unlikely to play this match.

UP captain, Samarth Singh had a standout season last time around with 385 runs in ten innings. He finished as fourth highest run-scorer in last year’s tournament and will look to make amends for a poor start on Tuesday. Ankit Rajpoot’s ability to swing the ball makes him a valuable option for the Dream11 Fantasy.

Manisankar Murasingh is a decent all-rounder, who is capable of picking wickets in the powerplay with incisive swing bowling. With his batting ability also taken into consideration, Murasingh is Tripura’s best bet against UP heading into this must-win clash. 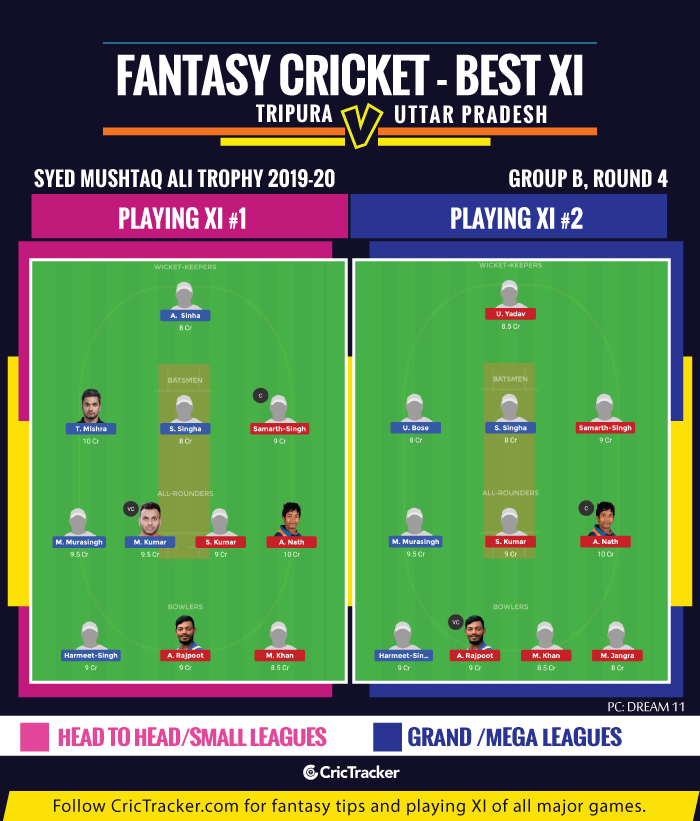 If Tripura were to bat first, picking three of four UP bowlers should do the trick. Mohsin Khan, who is available for 8.5 credits in Dream11 Fantasy, impressed against Tamil Nadu on Monday with figures of 1/13 and looks good for more against Tripura.

Picking middle-order batsmen from Tripura should be a viable punt considering UP’s lethal new-ball pairing of Ankit Rajpoot and Mohit Jangra. Milind Kumar and Manisankar Murasingh fit the bill in such a scenario.

Uttar Pradesh is expected to win this encounter.