They will be locking horns in the second of tomorrow's triple-header.

The Qualifiers of this edition’s T10 League is currently underway and has taken off two days ago with a few riveting encounters. The tournament will be a witness to three encounters tomorrow. Sindhis and Bengal Tigers are set to lock horns in the second of Thursday’s tripleheader at Sharjah Cricket Stadium and both teams would be keen to get off to a winning start.

Sindhis finished at the bottom of the points table in the first round and toppling Bengal won’t be easy for them by any stretch of the imagination. The Tigers, barring their defeat against Maratha Arabians by nine wickets, have looked clinical in the remaining two matches and they would be eager to carry on with their rich vein of form against Shane Watson and Co as well.

After some high-scoring encounters, the event has lately seen a few low-scoring affairs. The pitches have somewhat been kind to the bowlers as runs have been a tad difficult to come. However, teams would be keen to field first and chase after winning the toss. Nevertheless, bearing mind both team’s lineup, chances of a run-fest taking place can’t completely be ruled out.

Skipper Shane Watson and Anton Devcich are the opening batsmen with Englishman Dawid Malan to follow. A lot would also depend on how Thisara Perera and Ben Cutting wield their magic with the bat. They can also ruffle feathers with the leather in hand. Samiullah Shenwari would bat at number six. Tambe and Nawaz are the spinners with Archer and Udana being the specialist pacers.

The left-right combo of Jason Roy and Sunil Narine are the likely openers with all-rounder Luke Wright to follow. The middle-order has firepower with the likes of Rutherford and Billings in their ranks. The onus would also be on Mohammad Nabi to shepherd the troops. A lot would depend on the bowling-trio of Morne Morkel, Mujeeb Ur Rahman and Zaheer Khan.

The prediction is for Bengal Tigers to win the match. 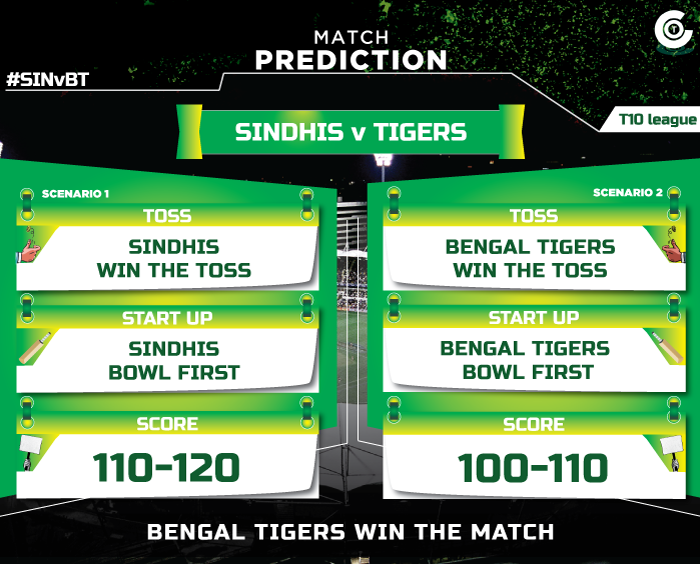