Bangla Tigers and Karnataka Tuskers will play their first matches on Saturday.

The T10 League at the Sheikh Zayed Stadium in Abu Dhabi got off to a blistering start. The second day is also set to witness a tripleheader. Bangla Tigers will play their first match against the Deccan Gladiators, who lost their opening game to the Delhi Bulls. Shane Watson’s Gladiators needed to defend 56 off the last four overs, but Eoin Morgan’s heroics in the death overs blew them away.

The Bulls, brimming confidence, will wish to carry their momentum in their next match against Hashim Amla’s Karnataka Tuskers. In the last game of the day, defending champions Northern Warriors will be locking horns with the Qalandars. The Warriors beat the Maratha Arabians by nine wickets to start their campaign. The Qalandars tied their first match against Team Abu Dhabi.

The pitch at the venue has been fairly good for batting. However, there have been instances when the bowlers have tended to get a stranglehold on the batters. Overly high scores weren’t the story on the opening day.

There is no rain and that’s something positive to start with. In the afternoon match, the temperature will be around the 28 degrees Celsius mark. It will come down to around 24 degrees Celsius by the end of the last match. The humidity will be in the 30s and will increase as the day progresses.

The Tigers have depth in both batting and bowling. Andre Fletcher and Rilee Russouw are likely to be the openers. Colin Ingram has a truckload of experience under his belt. Thisara Perera can take any bowling attack apart. Farhad Reza, Shehan Jayasuriya and Robbie Frylinck are more than handy as all-rounders. Plunkett and Wiese are the other pace options along with lone spinner Qais Ahmed.

The Gladiators need to sort their batting out. They lost only one wicket versus the Bulls, but could never press the accelerator.  Shane Watson got 57 off 31, but Anton Devcich strained, having scored 28 off 22 at 127.27. In bowling, they played three wrist spinners- Crane, Fawad and Zahir Khan. But Crane leaked runs. Zahir got three wickets and even Fawad didn’t allow the batters to break free.

The prediction is for Deccan Gladiators to win the match. 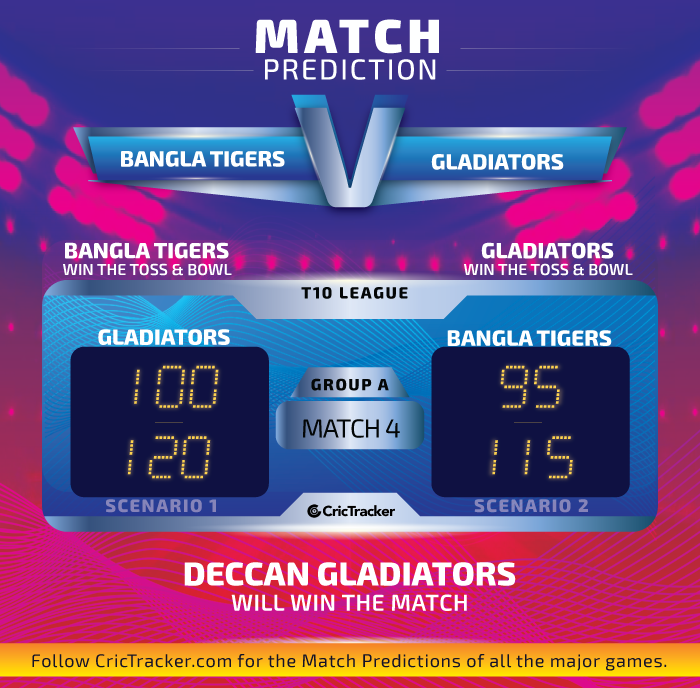 The Gladiators top order faltered in their first game. The likes of Paul Stirling, Kusal Perera and Muhammad Usman need to get their act right. Morgan got a half-century off 26 balls and is in red-hot form. Angelo Matthews looked in great touch as well. Rampaul and Chameera were incredible with the ball. Willey was impressive to start with. Ali Khan kept a check on the runs at the death.

The Tuskers have a good blend of batters who can throw the kitchen sink at everything and hold the innings together in crisis. A lot will depend on the likes of Johnson Charles, Shafiqullah Shafiq and Marlon Samuels, all of whom can be devastating on their day. Shapoor, Kesrick and Brown are likely to share the pace attack. Ahmed Raza and Sandeep Lamichhane are the likely spinners in the eleven.

The prediction is for Delhi Bulls to win the match. 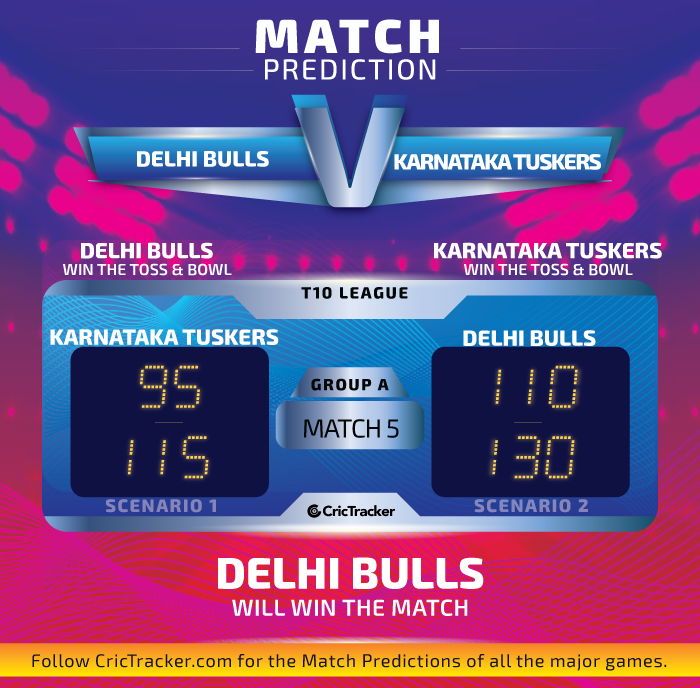 The Warriors bowling was stupendous against the Arabians. Barring Nuwan Pradeep, all of their bowlers ended up with economy of under 10. Chris Wood picked up a couple of wickets. Andre Russell was the star performer for them by a long way. Not only did he pick up two wickets, but notched 58 off 24 with four fours and six sixes. George Munsey played a decent hand of 24.

The Qalandars bowling has been decent thus far. Lahiru Kumara picked up a couple of wickets. Seekkuge Prasanna picked up Moeen Ali and also gave away three runs in the only over he bowled. Chris Jordan was exceptional at the death, giving away only 15 runs. Banton got a 9-ball 16. Phillip Salt and Dawid Malan got some useful runs. Luke Ronchi would wish for a bit more momentum.

The prediction is for Northern Warriors to win the match. 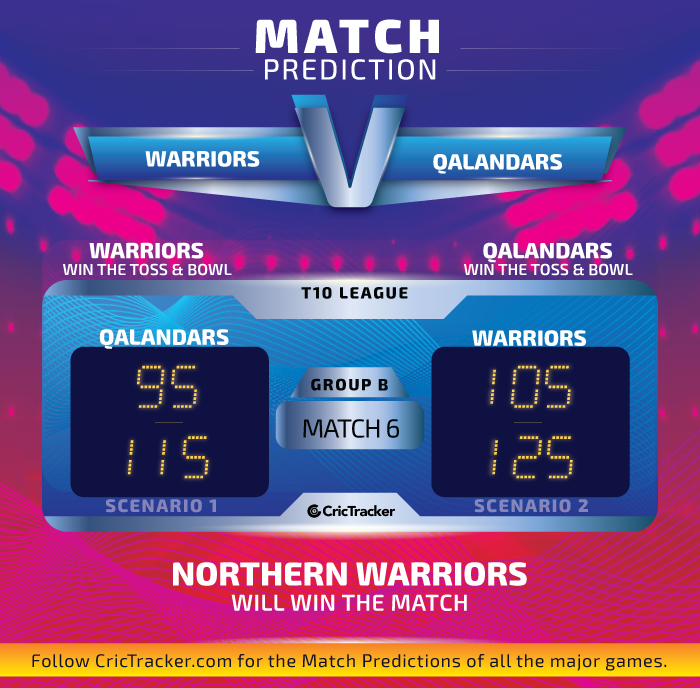