Can a rusty Abu Dhabi stop the Gladiators juggernaut?

The Super League of the T10 League at the Sheikh Zayed Stadium in Abu Dhabi got off to an exciting start. Northern Warriors stayed alive, defeating Delhi Bulls. Darren Sammy’s men will be against the Bangla Tigers, who are unbeaten from the last three game. It will be the second of Wednesday’s triple-header. Karnataka Tuskers and Maratha Arabians will face off in the day’s first encounter.

The Arabians decimated Team Abu Dhabi and having won their last two matches comprehensively. The Tuskers made a winning start against the Bulls, but have slumped to defeats versus the Tigers and Deccan Gladiators. The third game will be played between Abu Dhabi and the Gladiators, who are on a three-match winning streak. Abu Dhabi, on the other hand, have found it a tad difficult.

The pitch has gotten better with the progression of the event. Scores in excess of 110 have been made more often. Batting second is no more an automatic choice as scores above 120 have turned out to be tough to chase. So, the skippers should asses their team combination before taking a call.

Rain hasn’t made its presence felt thus far with minimum chances of rain. Wednesday is a tad different though. The conditions will be cloudy throughout with heavy chances of rain throughout the day, especially between 7 and 8 PM. The temperature will be around the 24 degrees Celsius.

The Tuskers have had batting as their stronger point. Johnson Charles and Hashim Amla with 105 and 85 runs have been their standout batters. Evin Lewis’ inclusion has bolstered their batting. In Shafiqullah, Tharanga and Whiteley, the Tuskers have a power-packed batting. Their bowlers have mostly given away runs at over 10 an over. Ahmed Raza is their top wicket-taker with four scalps.

The Arabians batting has mostly been about Chris Lyn, who got a 30-ball 91 in the previous game. Adam Lyth has threatened, but is yet to get a substantial score. Dasun Shanaka is also a powerful striker of the leather. Hazratullah and Najibullah have strengthened their batting further. In bowling, McClenaghan, Malinga and Bravo have economy under 10 and that has helped the Arabians a lot.

The prediction is for Maratha Arabians to win the match. 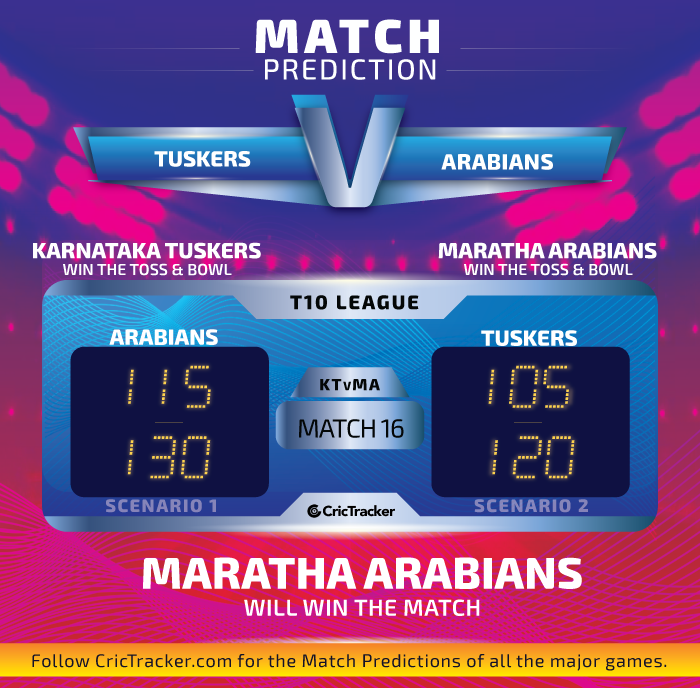 The Tigers have seemingly been the most in-form batting unit. Rilee Russouw, David Wiese and Andre Fletcher has strike-rates over 200. Russouw is also their leading run-scorer with 119 runs. The likes of Colin Ingram, Tom Moores and Thisara Perera need to up their game a wee bit. Their bowling can be vulnerable at times, but Qais Ahmed and others are slowly, but surely, finding their touch.

Lendl Simmons and Nicholas Pooran have added firepower to the Warriors’ batting unit. Andre Russell is their top run-scorer with 118 runs at a strike-rate of 193.44. It won’t be wrong in saying that Sam Billings have found it tough to get the boundaries. With the ball, Chris Green and Rayad Emrit are in good enough form. Pradeep and Russell haven’t flattered to deceive by any means. 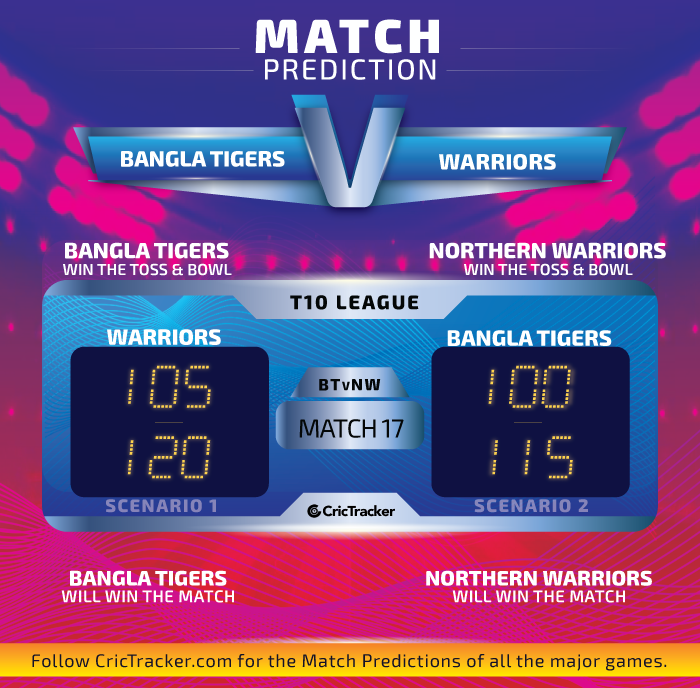 The Gladiators’ batting has been pretty much up to the mark. Shane Watson is their top run-scorer with 128 runs at 177.77. Mohammad Shahzad got his form back with a blistering knock of 57. Kieron Pollard would want to make amends after his odd failure. Bhanuka Rajapaksha and Anton Devcich have been reasonable. In bowling, a lot will depend on the trio of Pretorius, Zahir and Zahoor Khan.

Abu Dhabi’s batting has fallen apart a bit after the shoulder injury of Corey Anderson. Luke Wright was turning out to be their lone warrior with the bat in hand. But Avishka Fernando’s inclusion have done good to their batting, though it couldn’t them over the line last time around. In bowling, Rohan Mustafa and Laughlin need to maintain their consistency along with the likes of Gurney and Walsh.

The prediction is for Deccan Gladiators to win the match. 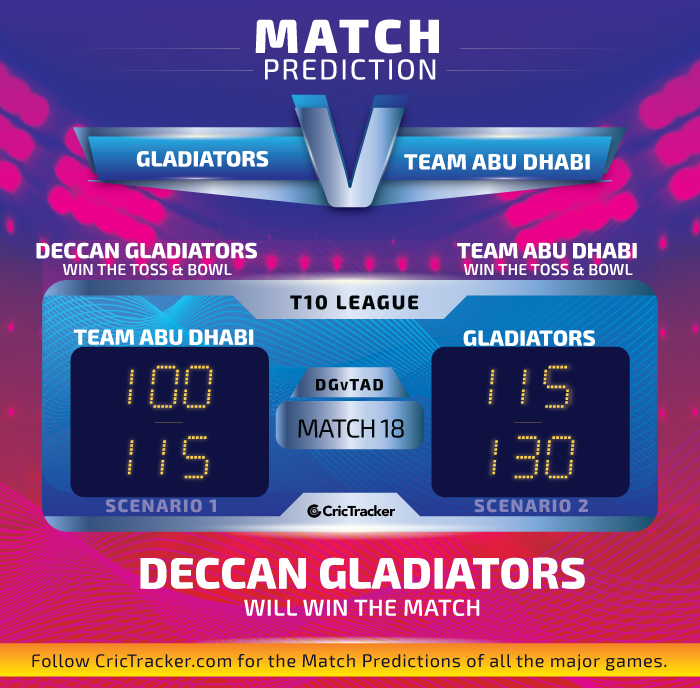