The Qalandars, Tuskers and Bulls desperate need a win to stay alive in the competition.

The penultimate day of the Super League in the 2019 T10 League is set to take place. Thursday, November 21 will be a witness to three encounters at the Sheikh Zayed Stadium in Abu Dhabi. The first game will be played between cellar dwellers Delhi Bulls and Maratha Arabians. The Bulls started with win, but ever since their campaign has gone downhill. The Arabians had a contrasting start.

Another victory for them will take them atop the points table. In the second game, the Qalandars and Karnataka Tuskers have locked horns. Both teams have had their travails and need a victory to qualify for the next round. The third match will see defending champions Northern Warriors and Deccan Gladiators lock horns. The Gladiators are the toppers, but the Warriors aren’t pushovers.

The pitches started being tough ones for the batsmen and being favourable for the teams, batting second. But as the tournament has gone by, the early trends changed. A win isn’t assured on batting second. Scores over 115 have more often been piled on, but the bowlers have also had their say.

The clouds will be there throughout the day. However, the good news is that there isn’t any chance of rain. The sun won’t be out at any stage and the temperature will hover around the 23 degrees Celsius mark. The humidity will mostly be in the 40s and 50s during the three encounters.

The Bulls have depended heavily on skipper Eoin Morgan, who as 156 runs at 195, in batting. Kusal Perera and Angelo Mathews have been reasonable, but need to contribute more. Sherfane Rutherford is yet to come into his own. Ravi Rampaul and Mohammad Nabi have economy below 10 and the rest have to support the duo. The former is also their leading wicket-taker with five scalps.

Chris Lynn has 176 runs at a strike-rate of 234.66 and he has shown enough consistency. Adam Lyth, coming at three, has 101 runs at 202. The rest of the batting is yet to produce something special. Hazratullah has flattered to deceive as well. Lasith Malinga and Mitchell McClenaghan have economy rates in the 7s with Dwayne Bravo’s economy being 9.33. The rest has been decent.

The prediction is for Maratha Arabians to win the match. 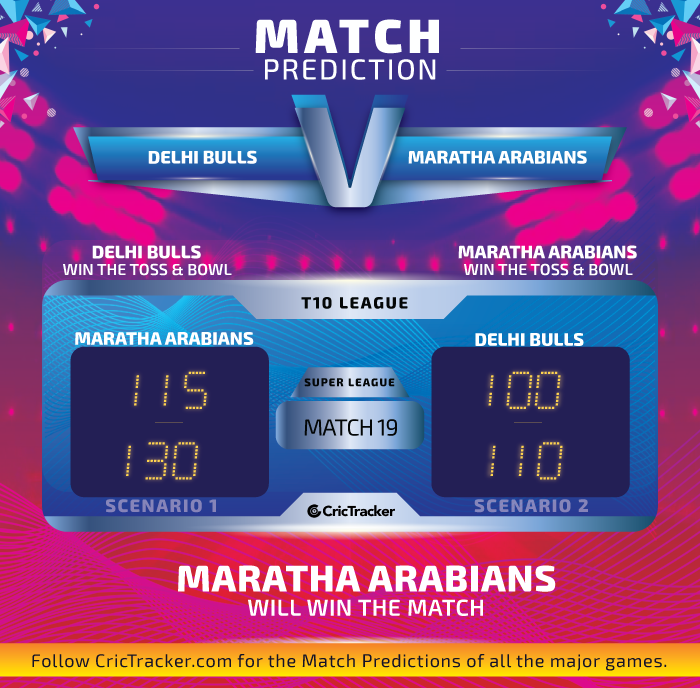 The Tuskers have a strong batting unit, but apart from Johnson Charles, who has 105 runs at 201.92, the rest haven’t been menacing. Hashim Amla has 85 runs, but has to up his strike-rate. Their bowling has also been taken for quite a bit of runs. Pacer Shapoor Zadran has been their standout bowler with an economy of 9.70. The rest have gone over 11, much to the concern of the Tuskers.

The Qalandars batting has mostly been about Malan, who has 115 runs at a strike-rate of 164.28. Tom Banton has scored a fifty, but he has had his fair share of failures. Luke Ronchi and Phillip Salt has looked a tad off colour. It can be said that the Qalandars have a potent bowling attack. Jordan and Prasanna have given nothing away. Lahiru Kumara and George Garton has also done brilliantly.

The prediction is for the Qalandars to win the match. 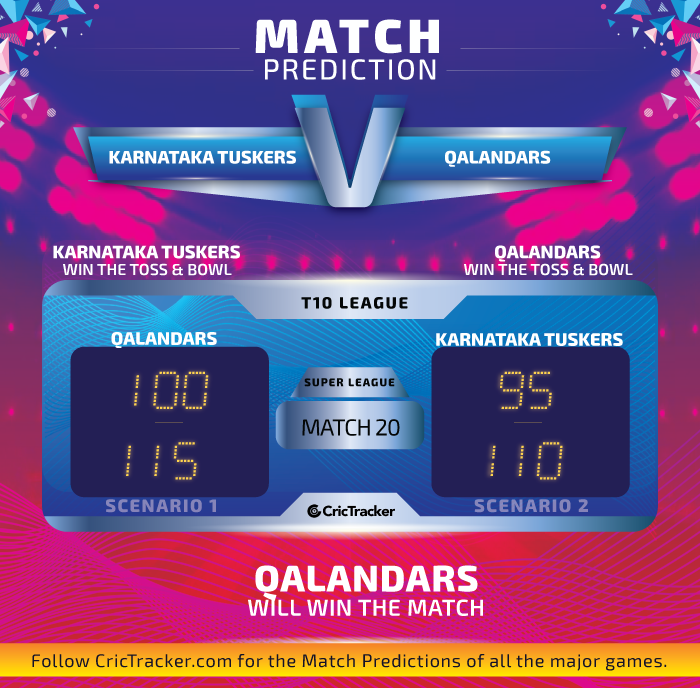 Shane Watson, their top run-scorer, has seen a few failures in recent times. But Mohammad Shahzad has started to find his rhythm. Bhanuka Rajapaksha has shown his power hitting prowess with a strike-rate of 222.72. Kieron Pollard is also a key player in the lineup. Miguel Pretorius, Fawad Ahmed, Zahoor Khan and Zahir Khan have economy rates under 10 and their role will be crucial.

The Warriors have mostly looked up to Andre Russell, their top run-scorer with 159 runs at a strike-rate of 184.88. Lendl Simmons and Nicholas Pooran have the potential to take any bowling attack apart with their stroke-play. In bowling, Rayad Emrit and Chris Green have been tough to pounce on. Russell, Nuwan Pradeep and Chris Wood have also done their task with pretty good efficiency. 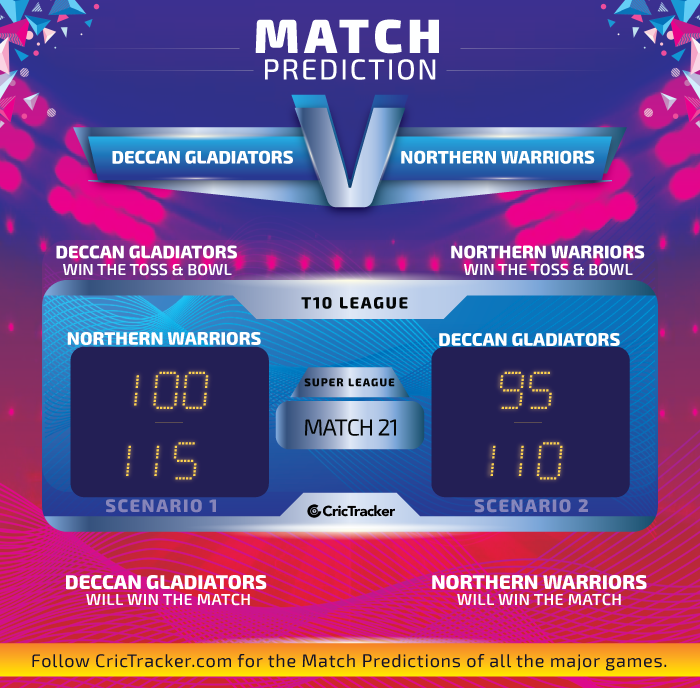