Which team will book its team in the final?

The final phase of the ongoing T10 League has arrived. Maratha Arabians and Qalandars will face-off in the first qualifier and will be benefitted for staying in the top two in the points table. They will get an extra chance to make it to the final now. During the group stage game between the two teams, the Arabians had thumped the Qalandars by 47 runs and will take that confidence forward coming into this game.

Deccan Gladiators and Bangla Tigers will play in the eliminator and it is expected to be a close encounter. Both the teams lost their respective previous matches but they already had more points compared to the other teams and qualified by the virtue of the same. The winner of this match will play against the loser of the first qualifier later in the day.

The surface at the Sheikh Zayed Stadium in Abu Dhabi has been a belter. The team batting first has regularly crossed the 100-run mark and has successfully defended the totals as well. Though the trend has been of bowling first after winning the toss, it should change today with a lot at stake.

It is a perfect day for three games of cricket to take place. The sun will be out when the first qualifier will get underway at 3.30 PM and there is no chance of rain at all. The temperature will hover around 22-24 Degrees Celsius during the action in the middle.

The Arabians will be delighted with their performance the other day against the Bangla Tigers. Most importantly, their Indian icon player Yuvraj Singh found some great form with the bat which is a good sign for them. The team led by Chris Lynn is unlikely to change their winning combination even as the onus with the bat will remain on the skipper, Adam Lyth, Walton and Yuvraj. Even Najibullah Zadran proved his hitting skills against the Tigers.

The veterans Dwayne Bravo and Lasith Malinga are doing a perfect job for them with the ball. While the former has taken care of the death overs, Malinga has managed to strike with the new ball more often than not. Shiraz Ahmed has also done well so far and the team will be hoping the same from him.

The Dawid Malan-led side is also coming on the back of a close victory over the Delhi Bulls on Friday. England’s domestic players have lit up the tournament and Qalandars possess as many as seven of them. All of them are expected to take part in this all-important game with Malan, Philip Salt and Laurie Evans hoping to put up a show with the bat. Tom Kohler-Cadmore is also a brilliant batsman and if he gets going, will be hard to stop.

Geroge Garton and Jordan Clark’s all-round skills has also steered the team to victory on multiple occasion and no doubt they will be crucial for the team yet again. Mujeeb Ur Rahman is another vital cog in the side and he rarely disappoints. Even they are unlikely to tinker with the winning combination.

The prediction is for the team winning the toss to win the match. 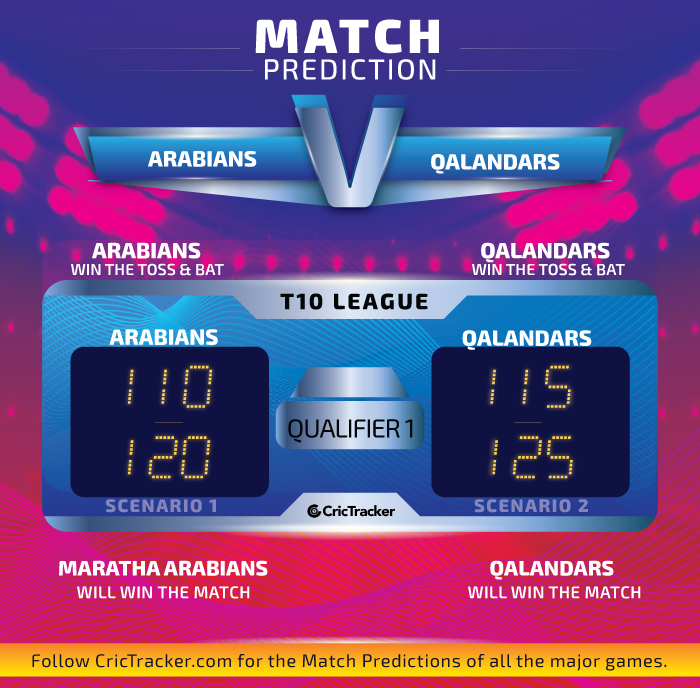 The Gladiators lost to the Northern Warriors on Friday chasing down 108 and will have to approach this game in the right frame of mind. Shane Watson scored an unbeaten 75 off 35 balls but couldn’t steer his side home. The likes of Mohammad Shahzad, Devcich and Pollard have to support their skipper. If the top four of the Gladiators get going, they can post or chase any kind of total.

They possess a plethora of spinners in their ranks and will unleash them again against the Tigers. Zahir Khan, Fawad Ahmed and Mason Crane are all good and can strangle the opposition batsmen. A lot will depend on how Ben Cutting goes about his business as well.

Bangla Tigers’ batsmen will have to put up a good show to have any chance against the Gladiators. The likes of Fletcher, Ingram and Roussouw have been extremely inconsistent in their trade which might cost them in the knockout match. Tom Moores’ unbeaten 43 saved the day for them on Friday but they will need more runs in the eliminator.

Their bowlers are very good with Qais Ahmad leading the way. Robbie Frylinck and Liam Plunkett have also been good so far with the ball and both will have to deliver big time. The skipper Thisara Perera is unlikely to get to bat much but should do a good job with the ball.

The prediction is for the Gladiators to win the match. 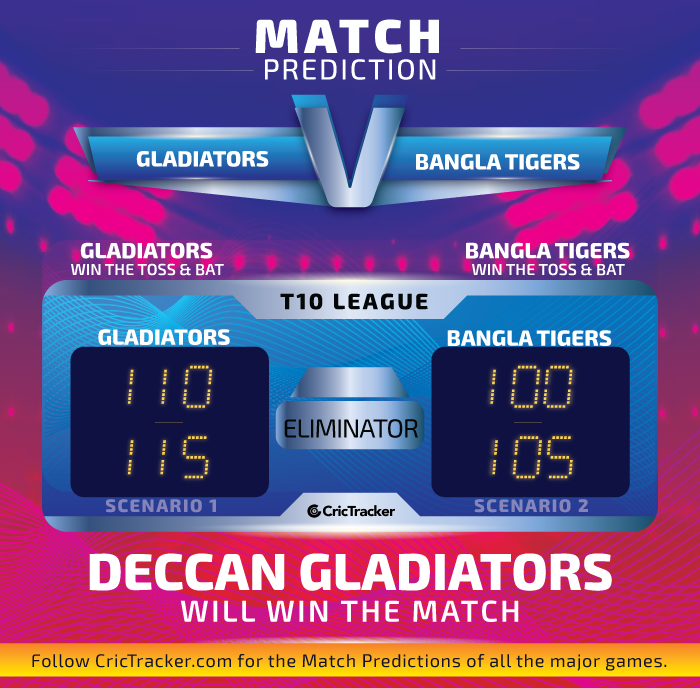