Bangla Tigers will begin their campaign on Saturday.

The 4th match of Group A in the T10 League 2019 will be played between the Bangla Tigers and Deccan Gladiators at the Sheikh Zayed Stadium in Abu Dhabi.

The T10 League 2019 is expected to be a treat for all the cricket fans who are anticipating exciting cricket. Humongous sixes and exciting death-overs bowling will be a vital part of the fast-paced league. The only Bangladesh-based franchise in the league- Bangla Tigers, will be led by all-rounder Thisara Perera. Perera, who has proved his calibre in international cricket in both the departments, will be hoping to lead his team from the front.

However, the Gladiators will miss Pollard’s services who is currently leading West Indies in the three-match T20I series against Afghanistan. Gladiators have also acquired Sheldon Cottrell to strengthen their bowling line-up. The T10 League will miss the services of Afghanistan and West Indies players.

The weather forecast is great for Saturday for a perfect game of cricket as no rain expected to intervene. There will be ample sunlight throughout the day and the temperature will hover around 29 degrees Celcius, according to AccuWeather.

The wicket is expected to fare well for the batsmen. The ground has witnessed many centuries in the past and the batsmen will be hoping to make the most of the conditions. The pitch is a bit on the slower side and seamers will have to work a bit more to make an impact in the game. Massive total is on the cards.

Pakistan players are not going to be a part of the league after PCB revoked NOCs.

West Indies and Afghanistan players will be unavailable for the first few matches as they are currently busy playing in India.

Three prominent all-rounders – Shane Watson, Ben Cutting and Anton Devcich will be a vital part of Gladiators. They will be responsible for boosting their side with their all-round abilities. Mohammad Shahzad is also expected to steer Gladiators to a flying start. These players should be picked in your Dream11 Fantasy team.

Thisara Perera will be leading Bangla Tigers from the front. Perera, who has a vast experience in international cricket, has gathered 2210 runs in 161 ODIs for Sri Lanka. South Africa’s Rilee Rossouw is also labelled as a game-changer due to his explosive style of batting. Recently, Rossouw caught many eyeballs after smashing a quick-fire ton against Chittagong Vikings in the sixth edition of Bangladesh Premier League. 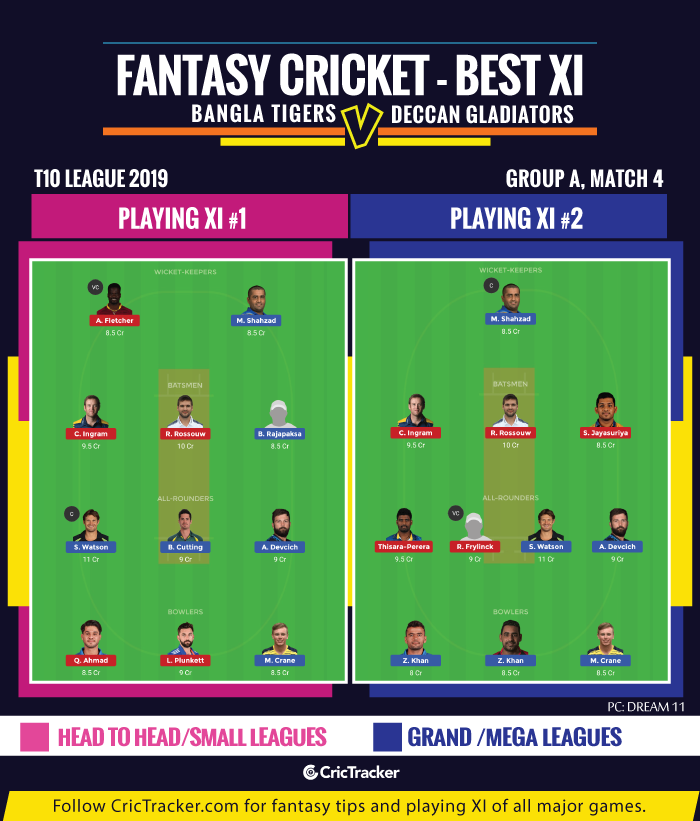 West Indies and Afghanistan players aren’t available. So don’t pick them in your Dream11 Fantasy team.

It would be a beneficial move to make all-rounders or openers C or VC of your team. Both the teams are equipped with top-class all-rounders.

Deccan Gladiators are favourites to win this match.