Both Thisara Perera and Rob Frylinck are good players in this format of the game and you should have at least one of them in one of your Dream11 Fantasy teams.

The 12th Match of the T10 League 2019 will be played between the Bangla Tigers and Delhi Bulls at the Sheikh Zayed Stadium in Abu Dhabi.

In the last group game in this edition of the T10 League 2019, the Bangla Tigers will square off against Karnataka Tuskers. This will be the third consecutive day on which the Tigers will come onto the field to play a game. The side did not have the best of starts to the tournament. But they managed to register an emphatic victory in the match against the Karnataka Tuskers which should bolster their confidence.

Their opponents, the Delhi Bulls, have had a day off on Sunday. The team disappointed with the bat in the last game against the Karnataka Tuskers. They kept losing wickets at regular intervals and conceded what should have been an easy win. When they step back on to the field, they will look to get back on track and register a victory.

Humidity levels will be high in Abu Dhabi in the evening on Monday. It won’t be too hot and players should not have any troubles with the weather.

Batsmen have a lot of freedom to play their shots at this venue. The ball seems to be coming on nicely and we have witnessed some good games of cricket already.

As the series between Afghanistan and West Indies has been concluded, their players might be available. But there is no update regarding the same.

There are quite a few top picks for this match. Eoin Morgan, Colin Ingram, Angelo Mathews and Rilee Rossouw are important amongst the batsmen category. You should have David Willey as well as David Wiese in your Dream11 Fantasy team. Ravi Rampaul is also a must. 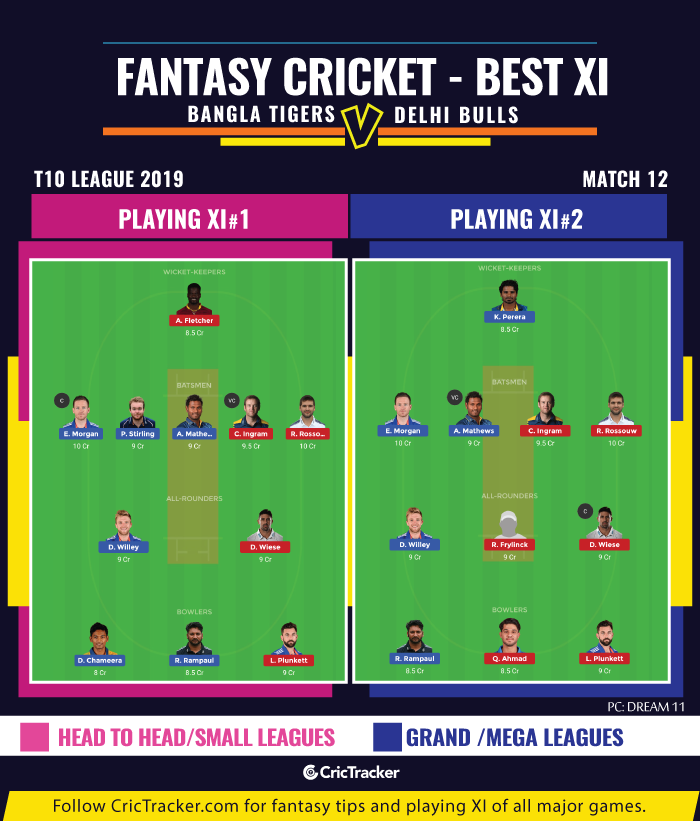 Both Thisara Perera and Rob Frylinck are good players in this format of the game and you should have at least one of them in one of your Dream11 Fantasy teams. It is completely a personal choice between these two as credits won’t be an issue.

Delhi Bulls are predicted to win this match.