Maratha Arabians are expected to win the game against Delhi Bulls.

The 19th match of the T10 League 2019 in Super League will be played between Delhi Bulls and Maratha Arabians at the Sheikh Zayed Stadium in Abu Dhabi.

The first game on Thursday in the ongoing T10 League 2019 in Super League could be a cracking encounter between Maratha Arabians from Group B and Delhi Bulls from Group A. Maratha Arabians are on a winning streak, who have won back to back two games and are ranked 3rd in the points table. But on the other side, Bulls are on the sixth position with just one win out of their four games played.

And, it will be a great opportunity for the Arabians to win the game and grab the top spot in the table. They have a star-studded batting line-up with the likes of Chris Lynn, Hazratullah Zazai and Chadwick Walton, who can bolster their possibility of winning their 3rd game in a row.

However, Delhi Bulls have been struggling with their batting line-up, who have remained unsuccessful in giving a breakthrough performance in the tournament. For them, only Eoin Morgan is in red-hot form, who has amassed 156 runs in 4 matches at a strike rate of 195.

There are strong chances of rain during the game time, but it will not hamper the length of the match because it is expected to be a passing shower. The temperature is expected to deviate between 25-28 degree celsius.

It will be a sporting wicket and fans can expect a run-fest. Also, the bowlers have not got any assistance from the pitch and have been smashed all around the park.  However, the team winning the toss will opt to bowl because the teams have found it difficult to chase on this ground in the games played at 3:30 pm.

Yuvraj Singh didn’t play the last match due to back trouble.

Chris Lynn was at his best in the previous game where he played a swashbuckling knock of 91 runs off just 30 balls makes him an important pick for any Dream11 Fantasy side.

Eoin Morgan is currently the top scorer in the league and is smashing runs at a brilliant strike rate of 195. Also, he has smashed two half-centuries in four games for his side. So, he cannot be neglected while picking up Dream11 Fantasy team. 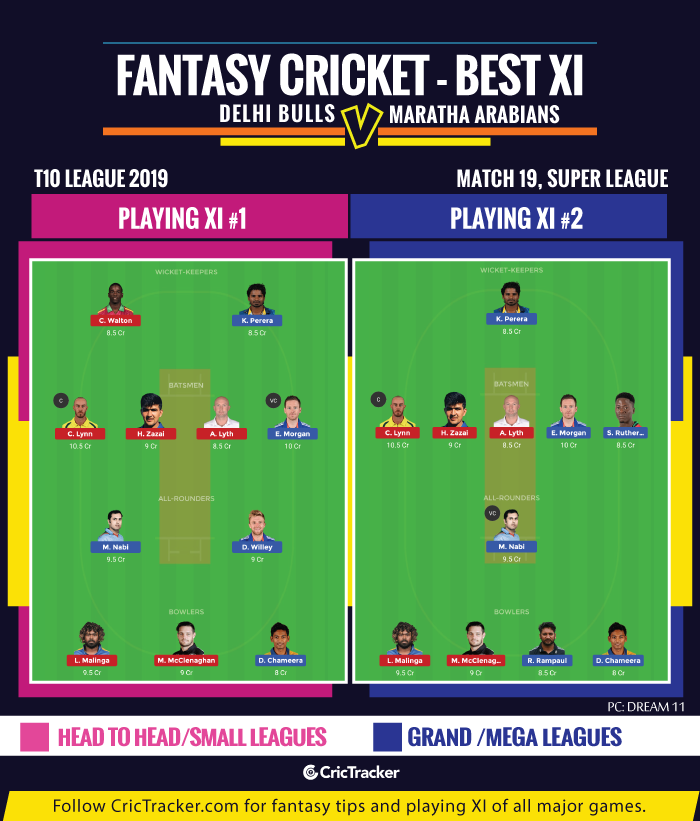 Chadwick Walton has not given any breakthrough performance in the ongoing tournament till now. But, his calibre to hit long sixes cannot be neglected and makes him an important player, who can be picked in the Grand League side.

The Maratha Arabians are expected to win this fixture.