Shahid Afridi isn't listed in the Dream11 app. You should pick him if he is there later.

The 3rd Match of the T10 League 2019 will be played between the Qalandars and Team Abu Dhabi at the Sheikh Zayed Stadium in Abu Dhabi.

This game can be viewed on Sony Six and Sony Ten 3. Live streaming available on Sony Liv.

Shahid Afridi’s Qalandars will take on Moeen Ali’s Team Abu Dhabi in the third game of cricket. This shortest possible form of cricket is undoubtedly one of the most entertaining. It often leaves the aficionadi on the edge of the seats and makes them watch the game in awe. The opening combination of Luke Ronchi and Tom Banton for the Qalandars could be one of the deadliest.

Team Abu Dhabi is no less either and has got two emerging talents in Paras Khadka and Rohan Mustafa as its openers. Both these teams are filled with some high-quality all-rounders and they bat quite deep. In this format, which is usually bat versus bat, both the sides will be eager to showcase their talent in this opening fixture of theirs.

The humidity levels will increase slightly during the evening. This might quicken the pitch and make life easy for the batsmen.

One could expect a run-feast in this encounter. The pitch is expected to be a great one for batsmen to play their shots on. Bowlers usually have to run for cover at this venue and in this format.

West Indies cricketer Hayden Walsh will not be available due to international commitments.

Given their ability to contribute with the bat as well as the ball, Moeen Ali, Corey Anderson and Chris Jordan make very good picks for your Dream11 Fantasy team. Tom Banton, Luke Wright and Luke Ronchi are also options worth considering. 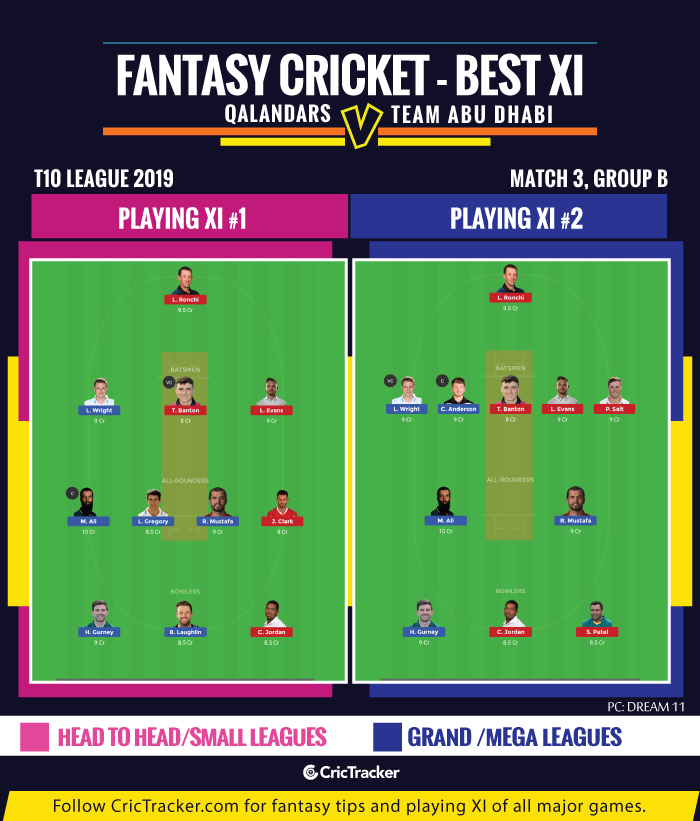 Keeping the format of the game in mind, it is better to pick just three bowlers in your Dream11 Fantasy team. Also, Shahid Afridi isn’t listed in the Dream11 app. You should pick him if he is there later.

Qalandars are expected to win this encounter.