Arjun Tendulkar will make his T20 Mumbai debut for the Aakash Tigers.

The second edition of the T20 Mumbai League will kick off with the defending champions Triumphs Knights MNE taking on the Akash Tigers MWS on Tuesday. The Triumphs Knights clinched a thriller against the Shivaji Park Lions by three runs to be crowned as the maiden champions of the T20 Mumbai in 2018. The team will be led by Suryakumar Yadav who played a key role in the team success last year.

Surya is coming on the back of a successful stint with the Mumbai Indians in the IPL that concluded on Sunday. Their title defence will begin against the new entrants Akash Tigers at the Wankhede Stadium. The Akash Tigers bought Arjun Tendulkar, son of former Indian legendary cricketer, Sachin Tendulkar. The all-rounder dragged the highest bid of 5 lakhs INR at the auction held this month.

The 1st match of the T20 Mumbai League 2019 will be played between Akash Tigers MWS and Triumphs Knights MNE at the Wankhede Stadium in Mumbai.

The Wankhede Stadium has been quite inconsistent during this IPL. However, the day games have been high-scoring ones at this venue. A fresh track for the tournament opener could produce a bit of help for the pacers.

Suryakumar Yadav is expected to be part of the opening game of the tournament.

Suryansh Shedge caught the limelight with a 137-ball 326 in the Giles Shield Match in 2017. He followed it with two centuries in the next two games. During the 2018-19 Vijay Merchant U16 tournament, Shedge scored 435 runs across five innings at an average of 87 with help of two tons in the 4-day tournament. He struck a 119-ball 194 against Maharashtra with help of 15 maximums and 12 fours.

Suryakumar Yadav will be the main pick as multiplier given his IPL form and success in the last edition of the tournament. Kaustubh Pawar’s experience could help him become a consistent run-getter for the side. The likes of Shams Mulani, Arjun Tendulkar and Suryansh Shedge can be considered as captain or vice-captain due to their dual roles. 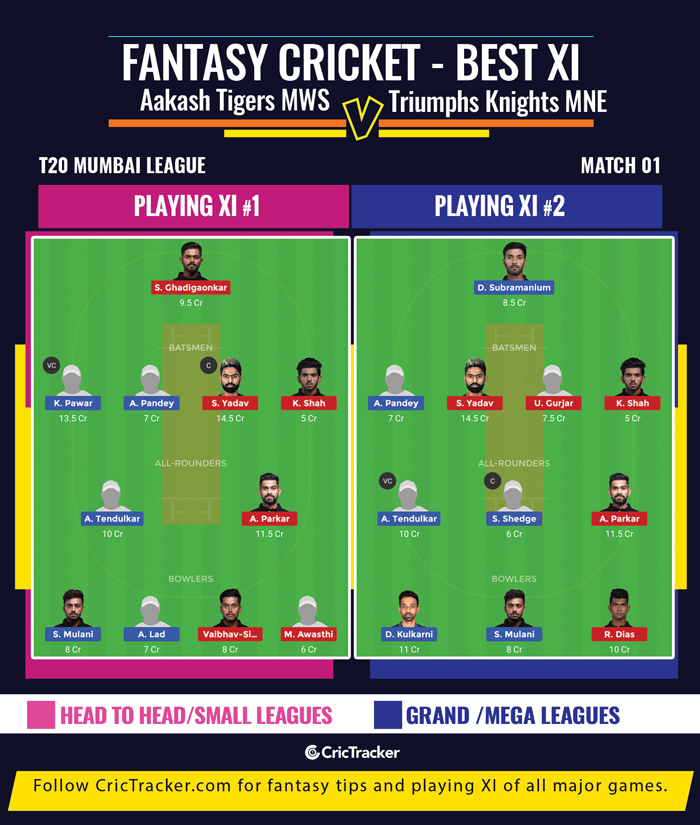 The batting order of both the teams will be a crucial determinant while selecting the team. Since this is the first match for both the teams, picking the top players on either sides will be the safest option.

The defending champions Triumphs Knights are expected to begin the season with a victory against Akash Tigers.