Badrey Alam bagged 12 wickets in the previous edition of the T20 Mumbai league.

Arcs Andheri and Sobo Supersonics will face off on the opening day of the 2nd edition of the T20 Mumbai League at the Wankhede. The Andheri franchise was a part of the opening game of the previous season and recorded a comfortable win. However, they failed to win one more game in the next four matches and crashed out of the tournament.

In the presence of Akhil Herwadkar, Tanmay Mishra, Iqbal Abdulla, Sufiyan Shaikh and Shubham Ranjane, Andheri will hope to have a better season. Sobo Supersonics had contrasting journey compared to Andheri last year as they began with a defeat. They followed it with four consecutive victories in the league phase to finish among the top four. However, the team couldn’t make it to the final as they lost both the qualifiers.

The 2nd match of the T20 Mumbai League 2019 will be played between Arcs Andheri and Sobo Supersonics at the Wankhede Stadium in Mumbai.

The night games in T20 Mumbai were high scoring ones in the previous edition compared to the evening matches. However, the recent IPL matches had a contrasting outcome as tracks were little sticky under the lights.

Badrey Alam finished as the joint highest wicket-taker of the inaugural edition of the T20 Mumbai League. He bagged 12 wickets across seven matches at a strike rate of 12.5 including a 5-wicket haul.

Jay Bista and Akhil Herwadkar will be perfect for multipliers as they open the innings and their game perfectly suits the shorter format. Bista can be picked as captain due to his recent form. All-rounders Shubham Ranjane and Iqbal Abdullah are good enough to make the most in both departments. 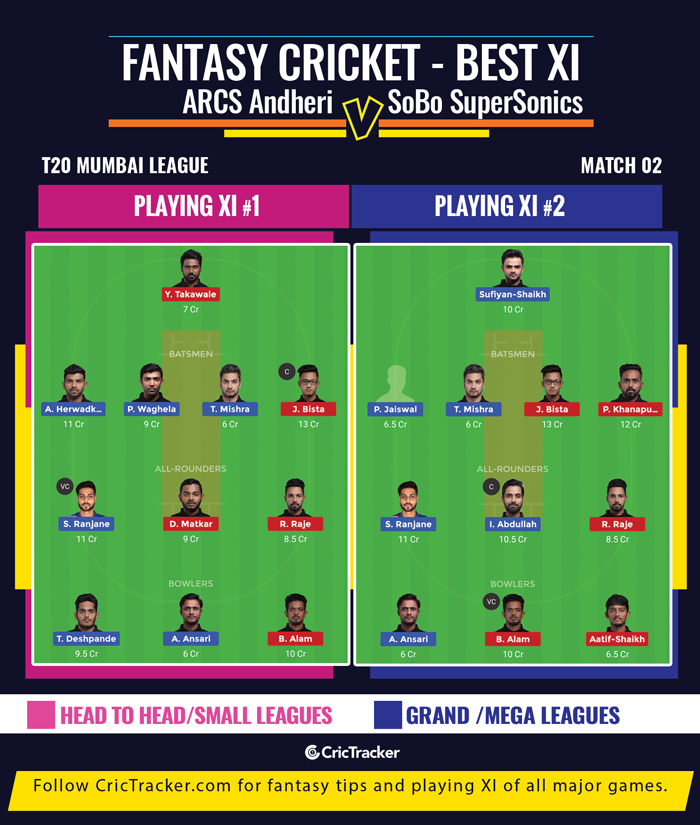 Only one of Shubham Ranjane and Iqbal Abdullah can be picked in all-rounders category to pick both Jay Bista and Akhil Herwadkar.

Sobo Supersonics are expected to start their campaign with a comfortable victory.