Jay Bista became the first centurion in the history of T20 Mumbai League.

SoBo Supersonics cruised to the final on the back of a sensational effort with the bat against the Aakash Tigers MWS in the second semi-final. Skipper Jay Bista became the first player to score a century in the history of T20 Mumbai League as he struck nine fours and five sixes on his way through to a 60-ball 110. His opening partner Hersh Tank scored 93 off 51 deliveries but unfortunately got run out and fell seven short of becoming the second centurion.

The pair added 196 for the first wicket in 18 overs as Supersonics finished with 217/4. Despite a couple of quick-fire knocks from the opposition, the Bista-led team completed a 26-run win by limiting the new franchise to 191/9. They will now be up against the North Mumbai Panthers who successfully chased down 167 in their semis against the Arcs Andheri. It was a similar story as the Panthers’ skipper Prithvi Shaw hogged the limelight with a 48-ball 76.

The final of the T20 Mumbai League 2019 will be played between North Mumbai Panthers and Sobo Supersonics at the Wankhede Stadium in Mumbai.

The game will be live on Star Sports 3. Live streaming available on Hotstar.

The semi-finals were high-scoring games as those were the only matches played on the day. A target of 167 runs was chased down in the first semis and over 400 runs were scored in the second. The final is expected to pan out on similar lines.

The inform captains Prithvi Shaw and Jay Bista have to be the first preferred multipliers. The semi-final was Parag Khanapurkar’s least productive game as he didn’t get to bat. 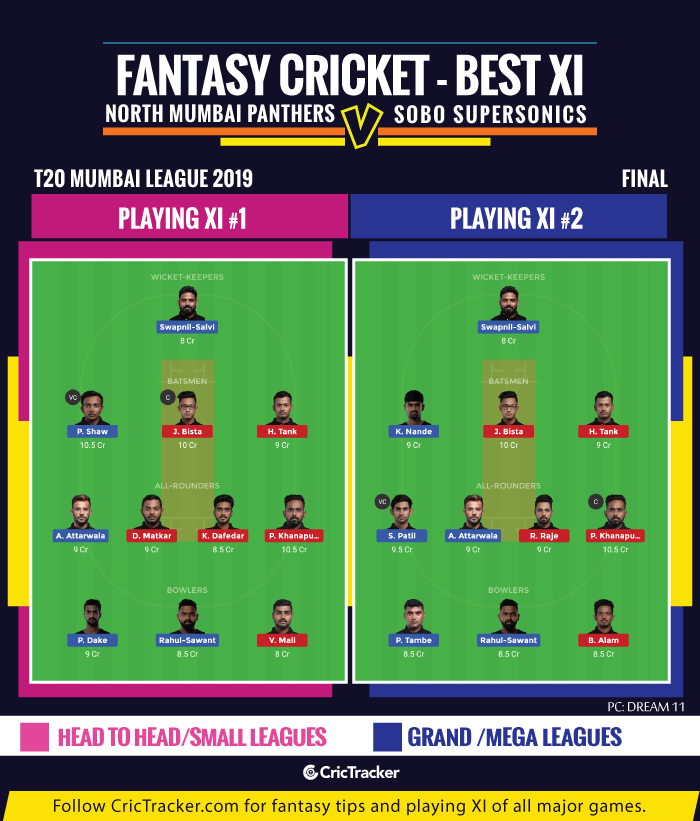 After their performances in the semi-finals, both Prithvi Shaw and Jay Bista become mandatory picks for this game as well. At the same time, there are no other safe alternatives in this category.

The inform Sobo Supersonics are expected to clinch the title by defeating the North Mumbai Panthers.