Parag Khanapurkar scored 156 runs in only three matches in this tournament.

SoBo Supersonics is the only side to remain undefeated in the T20 Mumbai League 2019 even after playing three matches. The Supersonics not only won but got their victories by solid margins. The Jay Bista-led team has a variety of players contributing for them this season. Parag Khanapurkar has been the top performer as he scored 156 runs in only three innings including this season’s highest individual score of 96.

They will be up against the NaMo Bandra Blasters who are fresh of opening their winning count after clinching a thriller. They suffered a 5-wicket defeat against Arcs Andheri and 27-run loss against North Mumbai Panthers. They finally got off the mark on the points tally after surviving a Shivam Dube Blitz on Sunday. The Shivaji Park Lions lost by three runs despite an unbeaten 46-ball 87 with seven maximums.

The 15th match of the T20 Mumbai League 2019 will be played between SoBo Supersonics and NaMo Bandra Blasters at the Wankhede Stadium in Mumbai.

The pitches for the afternoon games have been consistent as scores around 160 have been recorded in each of the last four day games with the chasing side winning on three instances. The trend is expected to be continued on Tuesday as well.

Parag Khanapurkar and Sujit Nayak have been consistent and are the safest options to use up captain and vice-captain boosters. Deepak Shetty is a worthy vice-captain pick while the all-rounders in the form of Rohan Raje and Aditya Dhumal can be picked as multipliers. 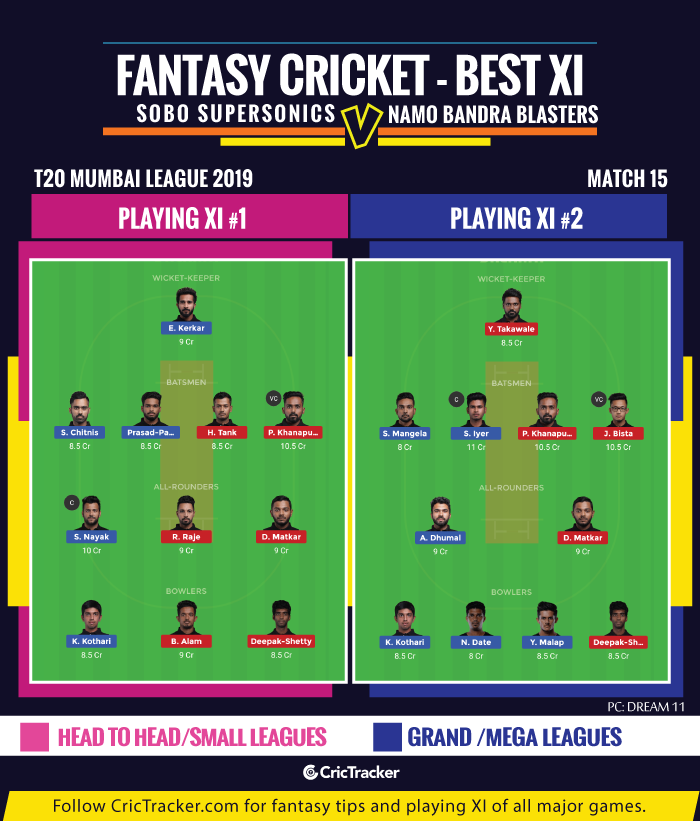 Shreyas Iyer has been pretty poor with the bat this season so far without any big scores in the three games played. With quite a few performers in the batsmen category, he can be ignored as he costs 11 credits. Jay Bista is also having an ordinary tournament and costs 10.5 credits. Taking both players in the same XI is no less than a gamble.