Akhil Herwadkar is the leading run-getter of this tournament having scoring 162 runs with two fifties.

The Eagle Thane Strikers have struggled for consistency as they have won only one of the three matches and are placed at bottom of Group A. They started with a 6-run defeat to North Mumbai Panthers but bounced back with a 6-wicket victory over Aakash Tigers MWS. Their recent most game turned out to be a nightmare as they were restricted to just 124/9 while chasing Triumph Knights’ total of 162/7.

They will now face the in-form Arcs Andheri who are cruising with three wins from four matches. They succumbed to a 48-run loss against the SoBo Supersonics in their first match but won all the three they played since then. Andheri’s 2019 campaign has been quite opposite to that of 2018 as they lost four in a row in the inaugural editions after beginning the tournament with a comfortable win.

The 16th match of the T20 Mumbai League 2019 will be played between Arcs Andheri and Eagle Thane Strikers at the Wankhede Stadium in Mumbai.

The night games in the T20 Mumbai are no different from the ones played during the IPL at the Wankhede. Bowlers have got some help from the pitch especially in the last three matches with the pitches getting tired. The average score in the last three night matches has been only 140.

Akhil Herwadkar is the leading run-getter of the T20 Mumbai 2019 and has to be first preferred for multipliers. Aditya Tare and Sagar Mishra have been quite consistent in this tournament so is Shubham Ranjane among the all-rounders. 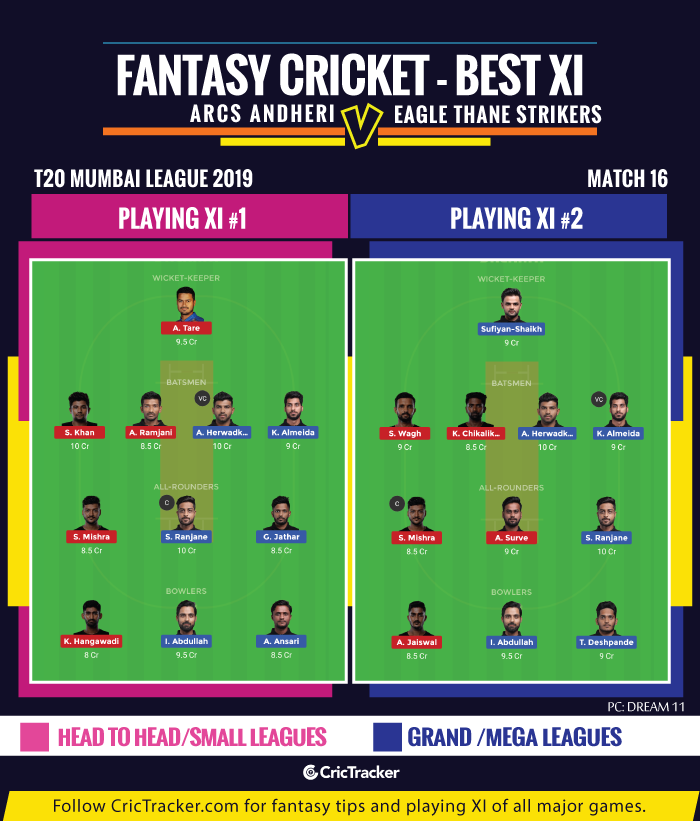 Four big names are present among the all-rounders but only a maximum of three can be picked. Sagar Mishra and Shubham Ranjane look ideal given their performances in all matches. Gamble has to be taken between Gaurav Jathar and Aishwary Surve.

Arcs Andheri are expected to extend their winning streak by defeating the Thane Strikers.