Shivaji Park Lions are yet to win a game in this season.

SoBo Supersonics’ winning streak finally came to an end when they clashed with the NaMo Bandra Blasters on Monday evening. Supersonics won each of their first three matches before going down to Bandra while defending their total of 151/8. No batsman stepped up and batted long for the Supersonics as they ended up with a below par total.

They will face the struggling Shivaji Park Lions team in their 5th match. The Shivaji Park team made it to the final of the previous edition but are yet to win a match this season. They ended up on the losing in all the three matches they played this year. One of the key reasons for their debacle has been their batting failure as they are failing to put on big totals.

The 17th match of the T20 Mumbai League 2019 will be played between SoBo Supersonics and Shivaji Park Lions at the Wankhede Stadium in Mumbai.

The chasing teams have benefited during the afternoon games as they’ve won six of the eight matches. 150+ scores have been a norm in the day and same is expected on the penultimate day of the league stage.

Parag Khanapurkar and Shivam Dube are the biggest picks from this game and have to be captain and vice-captain. Jay Bista’s inconsistency can be risked while Rohan Raje’s consistency can be trusted with one of the multipliers. 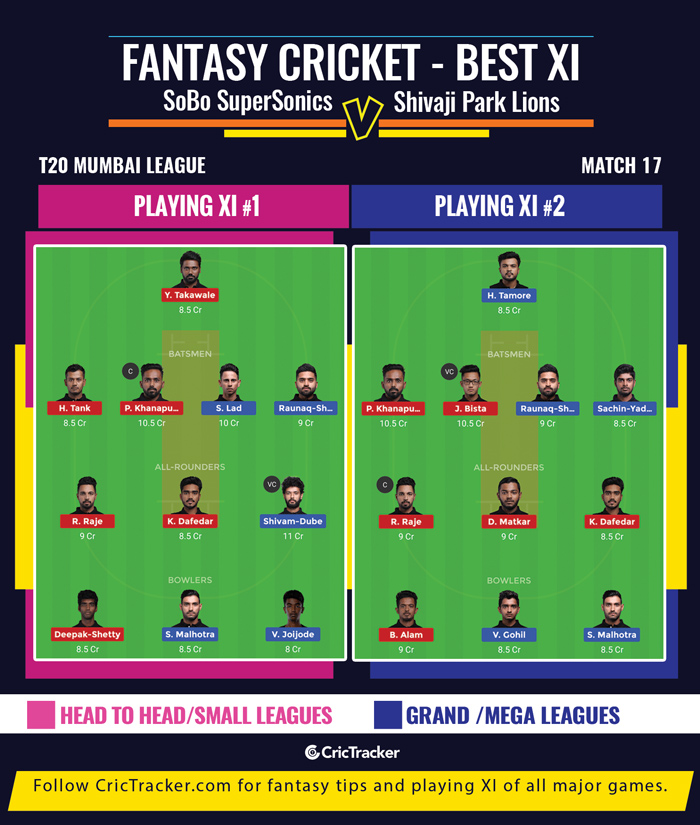 Shivaji Park Lions have been quite poor in the batting department. Only Raunaq Sharma looks ideal among batsmen from their team while Siddhesh Lad can be picked due to his experience and bowling ability.

Shivaji Park Lions are expected to register their first win and end the 3-match losing streak.