Siddhesh Lad and Shivam Dube were rested from the previous game of the Shivaji Park Lions.

The last league game of the 2019 T20 Mumbai League will be played between the Aakash Tigers MWS and the Shivaji Park Lions. The last year runners-up, the Shivaji Park team lost all the four matches they played and have lost their lost hope of finishing in final four long back. They even rested their skipper Siddhesh Lad and the all-rounder Shivam Dube in the game against SoBo Supersonics on Wednesday.

On the other hand, the Aakash Tigers won two of the four matches they played so far and still have a chance to seal a berth in the semi-finals. All they need is to defeat the Shivaji Park Lions in the last game and join the North Mumbai Panthers from Group A. This game will be do-or-die for Aakash Tigers as their NRR is lower than that of the Triumphs Knights MNE who are placed at 2nd spot in their group at the moment.

The 20th match of the T20 Mumbai League 2019 will be played between Aakash Tigers MWS and Shivaji Park Lions at the Wankhede Stadium in Mumbai.

The night games in the T20 Mumbai 2019 have been of the same template. The teams batting first won when they posted 150+ while the chasing sides got better in pursuit of sub 150 targets.

The Aakash Tigers all-rounders Arjun Tendulkar and Shams Mulani are ideal for multipliers as the two players play crucial roles with both bat and ball. The stand-in skipper of Shivaji Park, Raunaq Sharma is a good alternative considering his consistency with the bat. 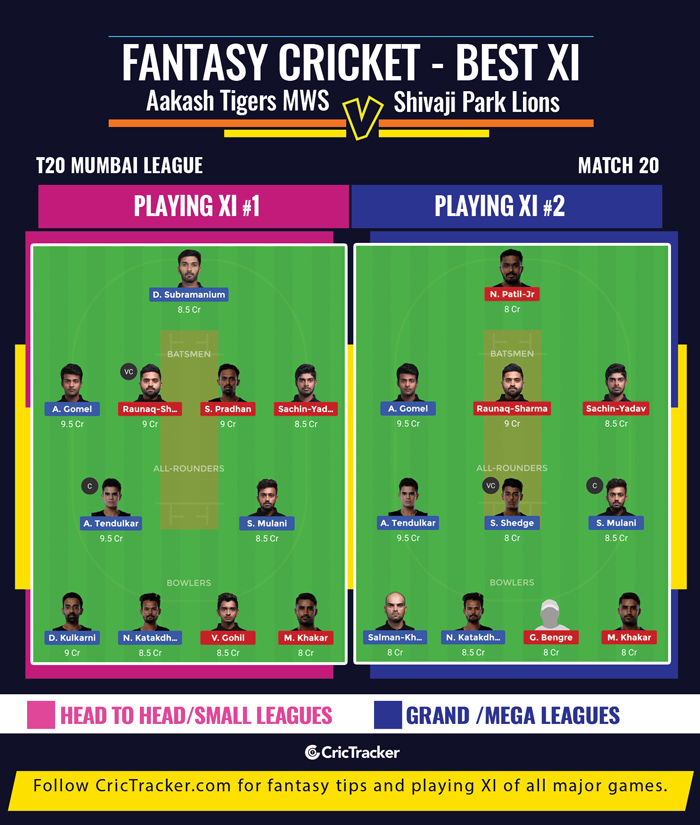 Siddhesh Lad and Shivam Dube were rested from their penultimate game as the result of the match hardly mattered for them. There is very less chance of them being part of the last league game either.

Aakash Tigers MWS are expected to finish off the league stage with a win and qualify for the semis.