After posting a victory in their second game, Andheri will look to consolidate their position against the Lions, who will play their first game of the 2019 tournament.

After posting a victory in their second game, Andheri will look to consolidate their position against the Lions, who will play their first game of the 2019 tournament. In 2018, the Lions fell short in the final hurdle. This time around, with a well-balanced outfit, they will look to do one better. The game against Andheri will be their first in the 2019 edition and needless to say, he will hope to get off to a winning start. Andheri, meanwhile, will be relieved after pulling off a rather close win to register their first points on the board for their 2019 campaign.

Harsh Jain, the co-owner of the franchise highlighted the consistency displayed these four players as the primary reason for having roped them in. “We are confident that they will be even better and stronger this time around when Season 2 starts,” he said.

After suffering a 48-run loss in the first game, Andheri bounced back with a 5 wicket win over the Blasters. A half-century from Akhil Herwardkar and some lusty rear-end hitting from Azhar Ansari ensure that Andheri picked up their first points of the tournament.

For Andheri, Tushar Deshpande, despite being expensive, picked up two vital wickets. The pickle of the bowlers, however, was Iqbal Abdullah, who bowled a tight spell of 0/21 from his quota of four overs. On the batting front, there were plenty of vital contributions from the Andheri outfit. While Herwardkar was solid at the top, the rear-guard action from Jathar and Ansari did the trick for Andheri.

Akhil Herwadkar: the opening batsman helped his side get off to a flyer while slamming three fours and two sixes en-route to 56 (46). Count on him to do more of the same

Azhar Ansari: Ansari’s late onslaught ensured that his side overcame a rather tight situation in a crucial run-chase. Ansari is a handy bowler as well and showed everybody just that with a spell of 1/20 against the Blasters

Shubham Ranjane: Ranjane is a dependable number-four batsman. He can control the middle-overs and also strike it big. His three-sixes and a boundary in a handy knock of 39 (24) kept Andheri in the hunt in the game against the Blasters

Siddhesh Lad: the right-hander has been an expert at bailing Mumbai out from the doldrums in the Ranji Trophy. The Lions saw his value last year and therefore, wasted no time in retaining him for 2019 as well. He is Mumbai cricket’s “Mr. Dependable”, so count on him to do more than just contribute

Shivam Dube: Dube is going to throw all his experience into the ring to ensure that the Lions roar this year. His franchise knows the value that he brings and you sure can keep an eye on him when picking your Fantain XI. 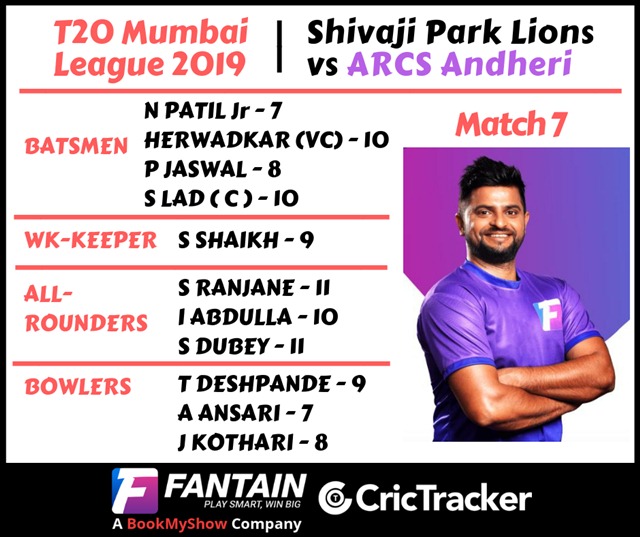