The defending champions Triumph Knights MNE continue to struggle this season as they finished with only 140s in both the matches they played thus far and ended up losing both. Skipper Suryakumar Yadav played a key role with the bat in the first game scoring an unbeaten 90 while Karan More scored a 35-ball 55 in the previous match against SoBo Supersonics. They now face Eagle Thane Strikers as they search for their first win of the season.

The Aditya Tare-led Thane Strikers lost to North Mumbai Panthers by a 6-run margin in their first match despite a fighting 71-run knock from Tare. The skipper got good support from the young Sarfaraz Khan in the game against Aakash Tigers MWS. Both the Mumbai senior team batsmen scored fifties to help Thane chase down 137 comfortably after Ankush Jaiswal’s hat-trick in the first innings.

The 9th match of the T20 Mumbai League 2019 will be played between Triumph Knights MNE and Eagle Thane Strikers at the Wankhede Stadium in Mumbai.

The afternoon matches have been inconsistent in the first four matches of the tournament. To win batting first in daylight, a minimum of 175 has to be scored. In the four games, three were won by the chasing side. The only loss for the chasing team in the afternoon came in pursuit of 191 that too by a 6-run margin.

Kalpesh Sawant was one of the key players for the Triumph Knights during their title victory in the 2018 edition as he bagged nine wickets in only seven matches. He got those wickets at an average of 12.11 and was taken for runs at an economy of 6.34. In the two matches this season, Sawant picked up only two wickets in five overs and was taken for 43 runs. The defending champions will be hoping for a better show from the off-spinner this time.

Aditya Tare scored fifties in both matches and is expected to continue his good form. Suryakumar Yadav would be hoping to lead his team from the front while Sarfaraz Khan bounced back with a fifty in the last game. 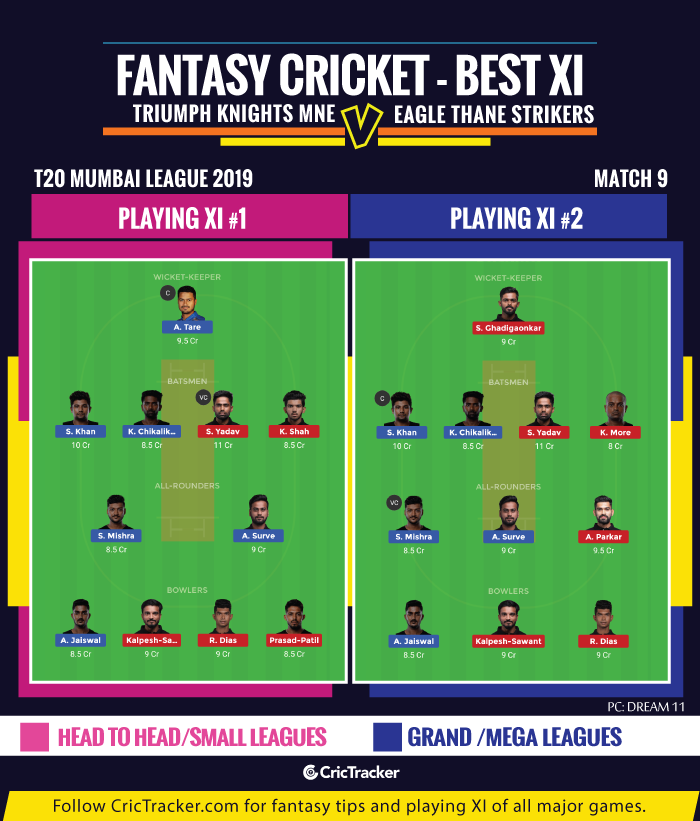 With Surya, Sarfaraz and Tare collectively costing 30.5 credits, the idea of picking Aakash Parkar can be shielding as the Triumph Knights all-rounder values at 9.5 credits and hasn’t delivered with either bat or ball.

The defending champions Triumph Knights might succumb to their 3rd successive defeat if their batting collapses once again.