The pitch at the Sher-e-Bangla Stadium has always been a pristine surface to bat on.

The final match of the T20I Tri-Series 2019 will be played between Bangladesh and Afghanistan at the Shere Bangla National Stadium in Dhaka.

So here we are then! After weeks of pulsating action, Brobdingnagian sixes, great bowling, heart-pumping all-round performances, and off-course a bit of a heartbreak, we are down to the grand finale of the T20I tri-series between hosts Bangladesh, Afghanistan, and Zimbabwe.

The final will see Bangladesh square-off against the Afghans as the latter aims to shrug off the blip of the last game where they went down to the hosts by four wickets. That was Afghanistan’s first defeat after a string of 12 unbeaten fixtures and also their first loss to the Bangladeshis since 2014.

In the last game, it was Shakib’s brilliance with the bat that trumped the Afghan spinners. The swashbuckling all-rounder scored a blazing 45-ball-70, notching up 50.35 percent of the runs that his team scored to steer them past the finishing line.

For the Afghans, it was rare off day in the field, one that was compounded by the hamstring injury that their skipper Rashid Khan suffered during the match. The all-rounder is running against time in a bid to get back to full fitness ahead of the all-important finals; something every Afghanistan fan would be hoping right now.

The venue has changed from Chattogram to Dhaka but inclement weather does not seem to leave cricket this year, it seems. According to the weather predictions, there is a 90 percent chance of rain at Dhaka on Tuesday. While the temperature will be around 27-28 degrees, the humidity is expected to be around 77 percent.

The pitch at the Sher-e-Bangla Stadium has always been a pristine surface to bat on. While it traditionally favors spinners in the second half, but with a bit of rain hovering in the air, seamers might come into play early on.

Afghanistan captain Rashid Khan suffered a hamstring injury during the last league-stage match against Bangladesh and is doubtful for the final.

Bangladesh: In the past two games, the under-fire batting unit has contributed at last. While it was Liton Das [38], Mushfiqur Rahim [32] and Mahmudullah [62] who spearheaded the batting against Zimbabwe, it was the brilliance of Shakib Al Hasan [70] that led them home against Afghanistan.

However, all Shakib and the team-management will hope they can chip-in as a whole in the all-important finals. Afif Hossain [2/9] has impressed with both bat and ball at different stages of the tournament. He could be an X-factor for the hosts.

Afghanistan: Afghanistan batsmen have also chipped in at different stages of the tournament. While it was the likes of Mohammad Nabi, Najibullah Zadran and Asghar Afghan in the early-stages, the opening pair of Rahmanullah Gurbaz [61 & 29] and Hazratullah Zazai [ 31 & 47] played crucial knocks in the past two games.

On the bowling front, if Rashid Khan ends up missing the game, the onus will be on Mujeeb Ur Rahman [7 wickets at 13.00] and Naveen Ul-Haq [2-20] to lead the bowling attack. 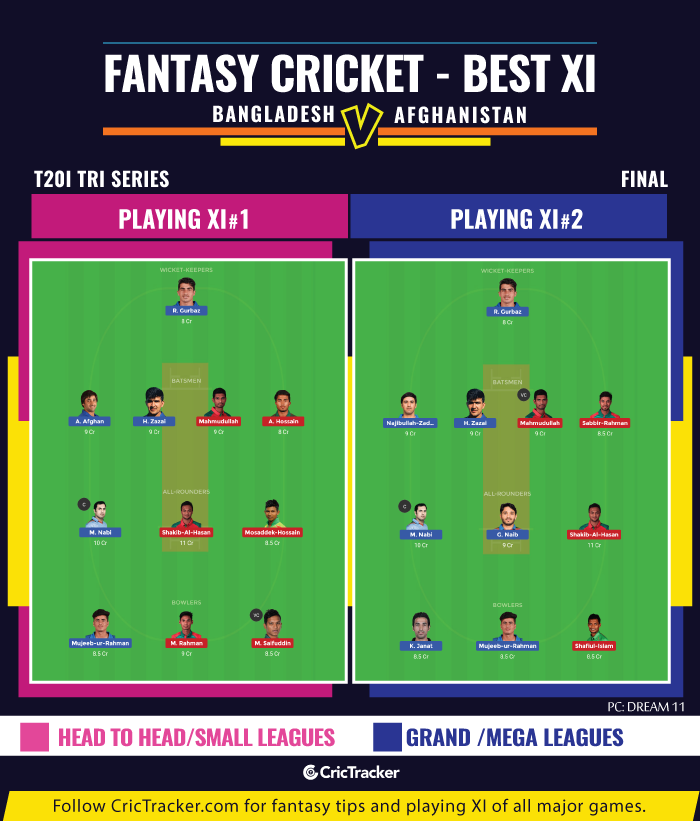 With a lot of rain around, there could be moisture for the fast bowlers to make use of. Thus making a fast bowler as captain/vice-captain could be worth a punt.

Afghanistan has been in red-hot form but the resurgence of Bangladesh followed by Rashid Khan’s injury have lent parity to the contest. If Rashid does miss out on the finals, Bangladesh will start as favorites.