The average T20I score at the venue is 148, which suggests that the game may not be a high-scoring affair.

Bangladesh were recently jolted with a blow as Afghanistan beat them in the one-off Test in Chattogram. After a lot of criticism, the Tigers are now set to head to Mirpur, Dhaka where they’ll take part in the T20I tri-nation series. The opening match is set to be played between the hosts and Zimbabwe at the Sher-e-Bangla National Stadium and the team will be desperate to make amends.

The Tigers have had their travails in the format over the years and it’s also an opportunity to build a team for next year’s T20 World Cup in Australia. As far as Zimbabwe is concerned, the team was recently banned by the International Cricket Council (ICC) with no financial assistance. The African side will want to play fearless cricket and show the world that they can compete at the highest level.

The track at the venue isn’t an overly high-scoring one. In the 39 T20Is, the average score has been 148. Though 19 of those matches were won by the team, batting first, it would be safe to bat second, bearing in mind the impact of dew in the second half. There are chances of rain at 7 and 8 PM and hence, there could be interruptions. The temperature will be around 28 degrees Celsius.

In the absence of Tamim Iqbal, the hosts are likely to open with Soumya Sarkar and Liton Das. The left-right duo can cause a lot of troubles for the opposition. Shakib Al Hasan remains as the fulcrum of the team and he’ll mostly be batting at three. Mushfiqur Rahim may be short in stature, but he can pack a punch while playing his shots. Afif Hossain was impressive with his off-breaks in the warm-up.

He picked up three wickets in that game. Sabbir Rahman and Mahmudullah’s role will also be critical. Mosaddek Hossain showed his utility down the order in the World Cup and he’ll look to replicate the same. Mohammad Saifuddin has returned from injury and it’ll be interesting to see how he performs. Mustafizur will also be playing after a break. Taijul is the specialist spin bowling option.

Hamilton Masakadza, their skipper, is set to retire after the series. The veteran will be hoping for a grand finish to his illustrious career. He’s most likely to open the batting alongside Brendan Taylor, who scored 57 runs off 44 balls in the practice match. Craig Ervine and Sean Ervine are two of the senior players and they’ll need to shoulder a chunk of responsibilities in the middle order.

Timycen Maruma scored a 46 in the same encounter and he’s in good stead. Williams caused troubles to the batters, picking up three wickets and he is expected to be tough to deal with. Neville Madziva,  and the experienced trio of Kyle Jarvis, Christopher Mpofu and Neville Madziva form the fast bowling unit. The visiting team is most likely to include one of Mutumbodzi and Munyonga. 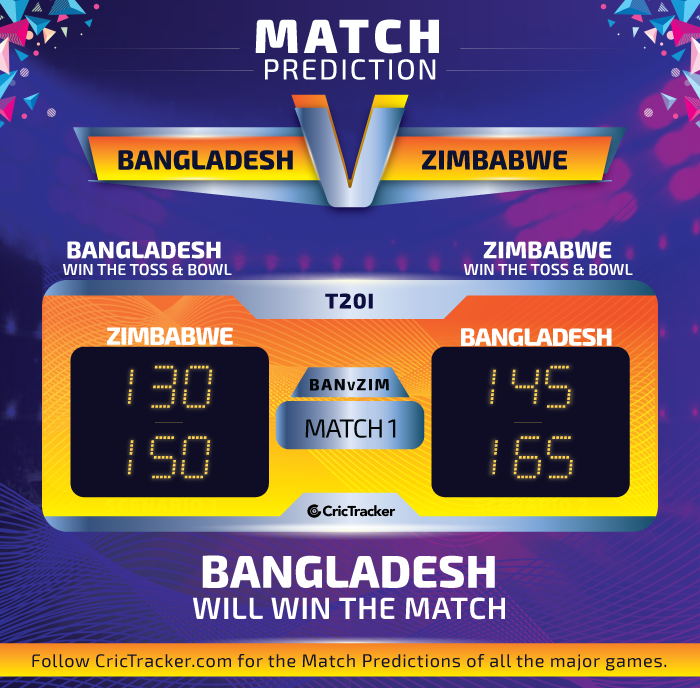