Last years, the Tigers slumped to a 3-0 series whitewash versus the Afghans in a T20I series.

Bangladesh found themselves in a rabbit hole in their opening match against Zimbabwe at the Sher-e-Bangla National Stadium in Mirpur. The Tigers had the upper hand in a lot of instances, but kept allowing Hamilton Masakadza and Co to make a comeback. In the end, Afif Hossain’s brilliance in the dying stages took them over the line. The hosts are next scheduled to lock horns with Afghanistan.

Last year in Dehradun, the Afghans defeated Bangladesh 3-0 in a T20I series. In fact, the Tigers last won a T20I match versus the opponent way back in 2014. One of the major challenges the home team is expected to face is staving off Rashid Khan, who tormented them in the one-off Test. The Afghans, on the other hand, made a winning start, defeating Zimbabwe comfortably by 28 runs.

The pitch will help the spinners and both sides have some quality tweakers in their ranks. But run-making won’t be all that difficult. Getting runs in the powerplay will hold significance. There are no predictions of rain, though there will be clouds hovering above. The temperature will be around the 28 degrees Celsius. The dew will make batting easy and hence teams should field first.

The Tigers need to sort out their batting at the earliest. They suffered a collapse after a good start and can’t afford the same against the Afghans. Soumya Sarkar played a rather poor shot. Shakib Al Hasan was disappointing with both bat and ball and the all-rounder will look to make amends.

Mushfiqur Rahim and Mahmudullah can’t afford back-to-back failures. Sabbir Rahman needs to show a bit of patience as well. Mosaddek and the young Afif were positives as both delivered under pressure. Taijul looked good on his debut. Saifuddin and Mustafizur were fairly on their mark.

Rahmanullah Gurbaz had an impressive debut and he’ll keep his position. Hazratullah Zazai would want to get going after failing in the first game. Najeeb Tarakai and Asghar Afghan missed out and they’ll look for a big score next time around. Nabi and Najibullah’s role remain crucial for the team.

In the bowling department, Mujeeb Ur Rahman couldn’t hit the right channels and would be looking to make amends. Rashid Khan was amongst the wickets, having picked up two of them. Fareed Malik and Karim Janat were pretty much on their mark as well. Nabi bowled two frugal overs in the middle. 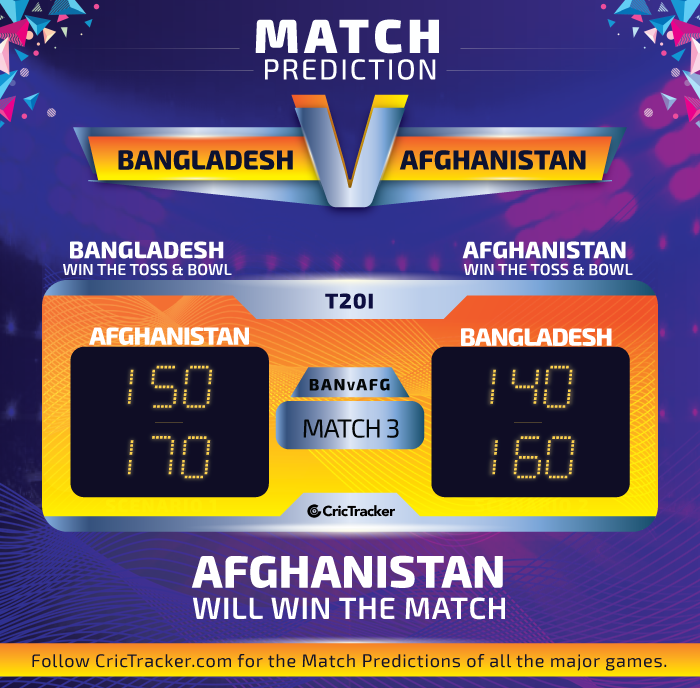