The Afghans are likely to test out their bench-strength in the dead rubber.

In the last match, Bangladesh defeated Zimbabwe by 39 runs and knocked the latter out of the T20I series. The result means that the remaining two league matches are mere dead rubbers as the Tigers along with Afghanistan have booked themselves a berth in the final. The next game is set to be played between the Afghans and Zimbabwe at Zahur Ahmed Chowdhury Stadium in Chattogram.

Despite its inconsequential nature, the match holds significance for Zimbabwe. Their skipper Hamilton Masakadza would be making his last appearance at the highest level and Zimbabwe would dearly want to give the veteran a fitting farewell. Toppling Rashid Khan and Co won’t be a cakewalk by any means as the team is on a 12-match winning streak in the format, having looked flawless.

In the last match, the track didn’t have any demons for the batters to be worried of. Shots on the up were played on a frequent basis, something which showed the true nature of the strip. The deck isn’t expected to change much during the course of the game. The weather will stay clear with the temperature around the 29 degrees Celsius. There will be dew, especially in the second half.

Zimbabwe has tried out all their 15 members in their squad without any results. In the last game, they made quite a few changes and the team may again go in with the same lineup. Brendan Taylor has threatened, but has been far from his best. Masakadza would want to play with freedom and churn out a substantial knock one last time in his career. Sean Williams has been good with the ball.

But the southpaw has failed miserably with the bat, having scored at an average of 1.33. Ryan Burl hasn’t quite delivered after his all-round show in the first match. In the bowling department, Kyle Jarvis has been their standout performer, getting five wickets, albeit at an economy of 9.66. Chris Mpofu was expensive his first match. Ndlovu and Madziva haven’t been all that impressive either.

The Afghans may make a few changes to their eleven. Dawlat Zadran is an experienced head and he may get the chance in place of Karim Janat. Sharafuddin Ashraf can come in place of Mujeeb Ur Rahman. Ashraf can also wield the willow to good effect in the hour of need. At the top, Hazratullah Zazai has gotten only 14 runs in two outings and the opener will be desperate to make amends.

Rahmanullah Gurbaz has shown promise, though he got a duck after his 43 on debut. The middle-order is in great shape with Mohammad Nabi, the highest run-scorer of the series, leading the pack. Najibullah Zadran and Asghar Afghan have done their bit as well. The bowling unit has hunted in packs. Among them, Karim Janat has looked a tad vulnerable, having picked only one wicket. 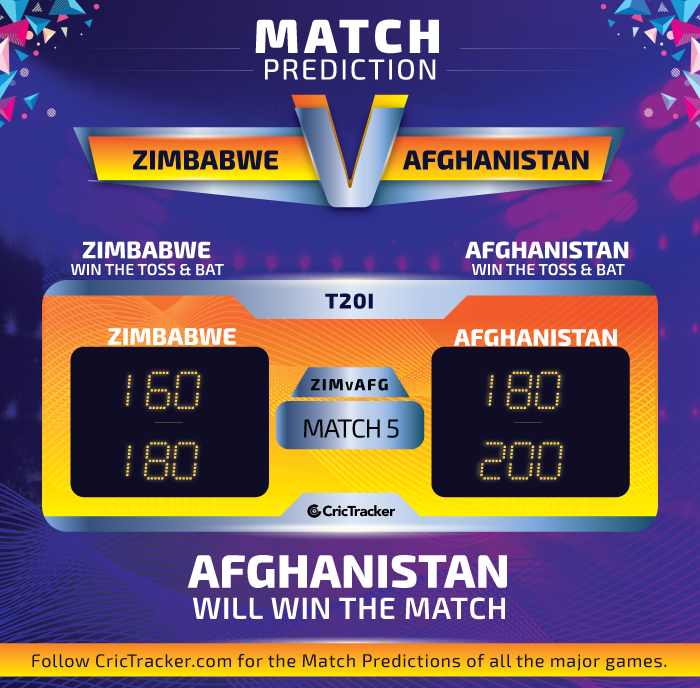