It is advisable to choose more bowling options from the side that opts to bowl first.

The 2nd match of the Women’s National Cricket League 2021 will be played between Tasmania Women & ACT Meteors at the EPC Solar Park, Canberra on February 3rd, Wednesday.

In the previous game against Queensland, ACT Meteors prevailed and won convincingly by 5 wickets. They look a very confident side after 3 straight wins and they would look to rattle the Tasmanians, who look rather timid currently.

The Tasmanian women are coming into this game on the back of four back-to-back defeats. The last time these 2 sides met, it was ACT Meteors who won the match by 3 wickets when they chased down 198 inside 47 overs.

Sunny conditions with temperatures around 25 degrees would make great conditions for a game of cricket. Humidity would be around 60% with only 20% chances of rain.

The pitch favours teams that opt to bowl first and has a 100% win record in the 3 matches that have been played here. So expect Captains to win toss and bowl first.

Carly Leeson delivered a man of the match performance in her previous game against Queensland, where she took 4 wickets and rattled the opposition completely. She would like to continue her performance in this fixture as well.

Katie Mack opened the innings in the previous game, with some fireworks at the very start of her knock. She made a quickfire 54 in just 51 deliveries. Expect her to return magical numbers in this game as well.

Erin Osborne not only took 2 wickets in the previous game, but she was also handy with the bat as she made 40 off just 31 balls. An all-rounder like her can give you bonus fantasy points in both departments, which makes her a must-have in your XI.

Heather Graham has picked 8 wickets in her last 5 games and had a decent season in the Women’s Big Bash as well. Expect her to dominate with the ball in this game for the Tasmanians.

Samantha Bates is a phenomenal spinner who can turn the game quite literally with her bowling. She was in good form in the Big Bash and has played for the opposition team ACT for nearly a decade. She is well aware of their tactics which might put the Tasmanians in the front seat for this game. 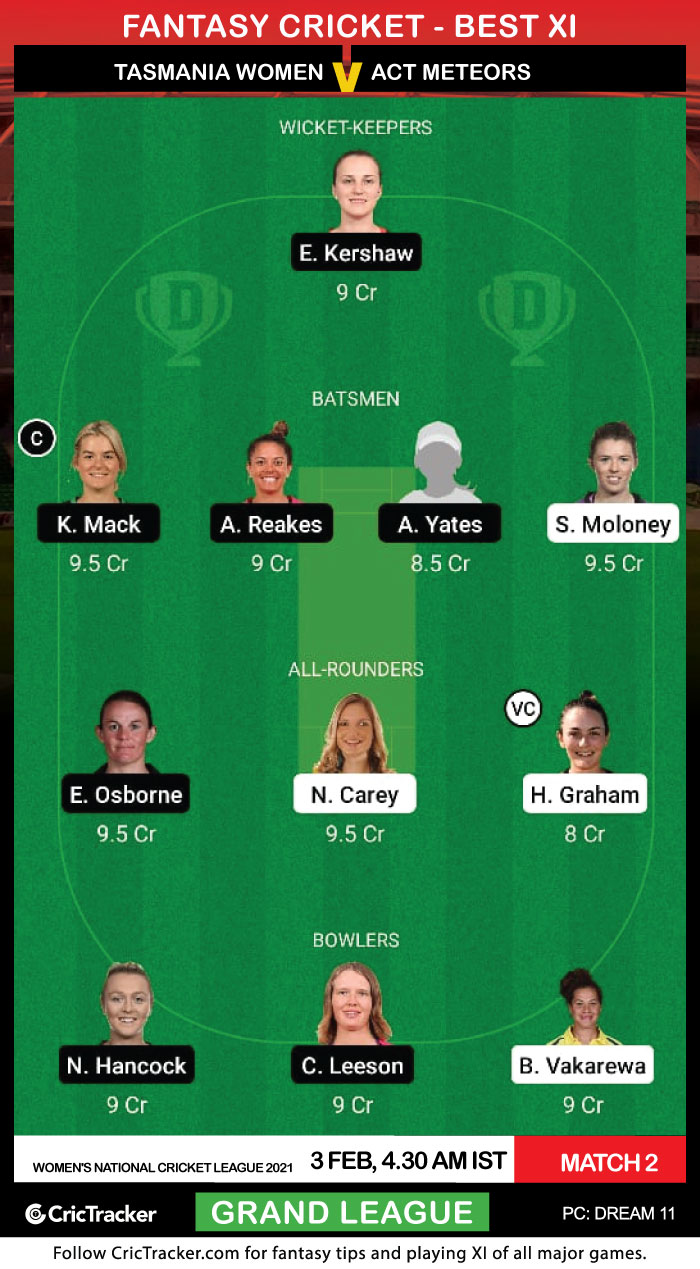 It is advisable to choose more bowling options from the side that opts to bowl first.

ACT Meteors are expected to win this match.