It remains to be seen how long can Indian team sustain their winning run.

The Indian team has been the most dominant one since the start of the ICC World Test Championship, which started with the series win against West Indies in the 2-match series. Since then, they have gathered 300 points in six Test matches so far, with the latest win coming against Bangladesh in the recently concluded Indore Test.

Bangladesh had scored 150 and 213 in the two innings against a potent Indian attack, in reply to Kohli and his men’s 493/6d. Mayank Agarwal starred with the bat scoring 243, his highest Test score and second Test double ton in his short career. Meanwhile, Mohammed Shami, R Ashwin, and Umesh Yadav combined to ruin Mominul Haque’s debut as Bangladesh’s Test captain.

The Virat Kohli led team has now gathered 300 points from six matches in the points table of the ICC World Test Championship so far. They now have a chance to move to 360 points if they manage to beat Bangladesh in their first-ever day-night Test match to be played at the Eden Garden in Kolkata from November 22. This will also be the first pink-ball match played in the country, making Kohli the first Indian Test captain to lead his team in this historic match.

Meanwhile, they are followed by New Zealand (60 points after 2 games), Sri Lanka (60 points in 2 games), Australia and England (56 points each). Australia will take on Pakistan at home in a two-match series, while England takes on New Zealand in New Zealand in a similar number of matches. For India, the next series after Bangladesh will be West Indies, who will be playing the no.1 ranked Test team in the 2-match series in December.

The Kohli-led dominant team’s biggest challenge will come in January next year when they tour New Zealand and play in two Tests, 3 ODIs and five T20I matches. The Indian team has been wining everywhere thanks to a lethal pace bowling attack comprising of Ishant Sharma, Mohammed Shami, Umesh Yadav and currently injured Jasprit Bumrah. Combine them with R Ashwin and Ravindra Jadeja and you have the perfect Test bowling attack one can have.

It remains to be seen how long can Indian team sustain their winning run given that they face Australia in a four-match Border Gavaskar Trophy in 2020 winter Down Under and then they will face England at home in a five-match series at home in January of 2021. 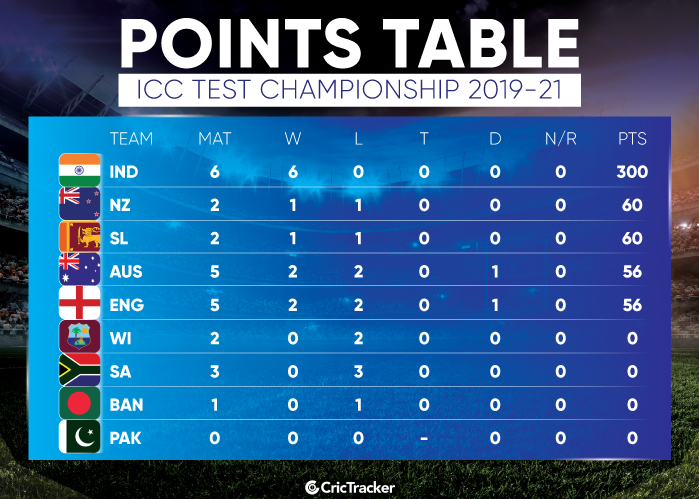