George Worker amassed 1029 runs at an average of 64.3 across last 18 innings in Ford Trophy.

The 3rd match of the Ford Trophy 2019-20 will be played between Central Districts and Canterbury at the Fitzherbert Park in Palmerston North.

Central Districts and Canterbury will lock horns in the Ford Trophy 2019-20 match at the Fitzherbert Park. Both the teams finished at the bottom half of the table in the previous edition. Central Districts managed to win only three matches and finished at No.5. Canterbury had only two wins to their credits and bagged wooden spoon. Both the teams will be looking to start the tournament with a win in the absence of International stars. The weather could have a say in this game as a full 50-over match is unlikely to take place on Sunday.

We have to be lucky enough to witness a result produced from this match. Showers are expected throughout the opening day of the tournament here in Palmerston North.

The Fitzherbert Park in Palmerston North has hosted one game in every Ford Trophy starting from 2013/14. The last three editions witnessed the team batting first posting 280+. The chasing teams have come close to the target every time. A match aggregate of 550+ runs could be seen on Sunday at this venue.

Canterbury skipper Cole McConchie scored 246 runs with two fifties in the last edition and stood as the team’s highest wicket-taker with 13 wickets. George Worker didn’t feature in the last Ford Trophy but across 2016/17 and 2017/18 editions, he amassed 1029 runs at an average of 64.3. In 18 innings during the two tournaments, Worker struck two centuries and eight fifties. Josh Clarkson has hit two List A tons across the previous three Ford Trophy editions. Henry Shipley scored 143 runs at an average of 35.75 and picked up 9 wickets in 2018/19 Ford Trophy. 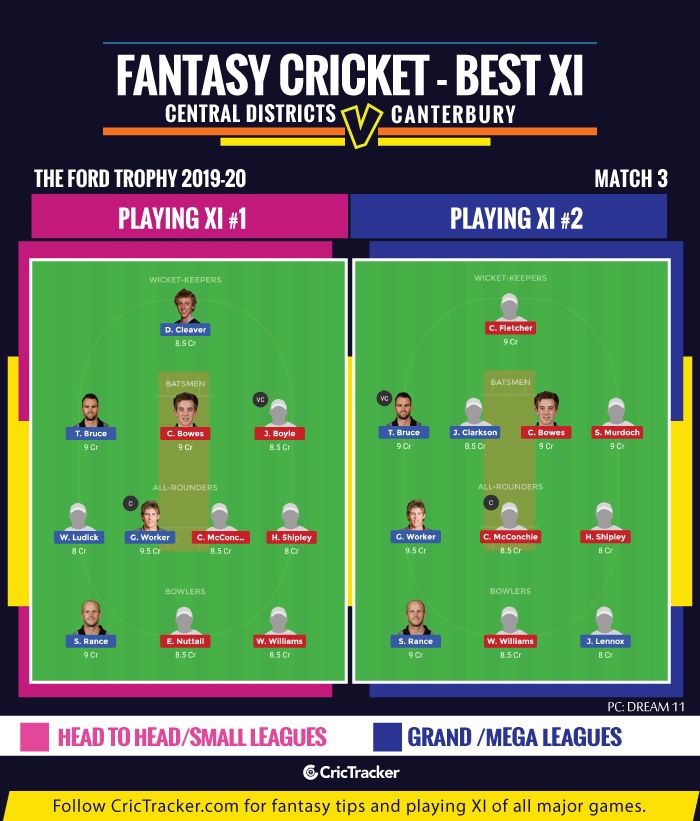 Central Districts have named as many as four players in their 12-man squad who are yet to make their One-Day debut. With a possibility of only three of them playing, we preferred Seth Rance as the only option from Central Districts in the bowlers’ category. Jayden Lennox has better credentials than the other and hence is likely to have a good debut.

Central Districts are expected to win the game due to experience in the batting line-up.