Daryl Mitchell amassed 950 runs and picked up 28 wickets across last three editions of the Ford Trophy.

The 6th match of the Ford Trophy 2019-20 will be played between Northern Districts and Canterbury at the Seddon Park in Hamilton.

Northern Districts will play 2nd consecutive match of the tournament at their home ground, Seddon Park in Hamilton. In the first game, the Northern Districts fell short while chasing against Otago. After losing the toss, Otago posted 282 in their 50 overs. The home team kept losing wickets and were placed at 226/8 in 44.4 overs and well behind DLS par score. They will now take on Canterbury on Thursday who got lucky due to rain on Sunday. The Central Districts finished with a huge total of 349 and Canterbury were 3/0 in 2.4 overs at the time of rain interruption. The Northern Districts are now boosted by the inclusion of many star players.

No threat of rain is expected for this match but there will be cloud cover from 7 PM local time.

Unless a green tinge is left over, the Hamilton’s Seddon Park is perfect for One-Dayers with not so long boundaries. In the first match of the season, Otago smashed 282 in their 50 overs here. The home team Northern Knights kept losing wickets but were placed at 226/8 in 44.4 but were well behind the DLS par score. We could see a better track for batting on Thursday with the pitch being on the drier side.

Todd Astle has been released from New Zealand’s Test squad.

Brett Hampton took a wicket in the last game but scored only 10 runs. In the previous edition, Hampton aggregated 271 runs at an average of 45.16 and at an impressive strike rate of 119.91. Daryl Mitchell has been quite brilliant with both bat and ball in the last three seasons. Across the previous three Ford Trophy editions, Mitchell amassed 950 runs in 24 innings at an average of 50. He also picked up 28 wickets from 23 innings.

Canterbury skipper Cole McConchie scored 246 runs with two fifties in the last season and took 13 wickets. In the first match, he conceded only 44 runs bowling 10 overs while his team conceded 349 to Central Districts. Henry Shipley went wickets less in 8 overs he bowled in the first game. However, he scored 143 runs at an average of 35.75 and claimed 9 wickets in 2018/19 Ford Trophy. 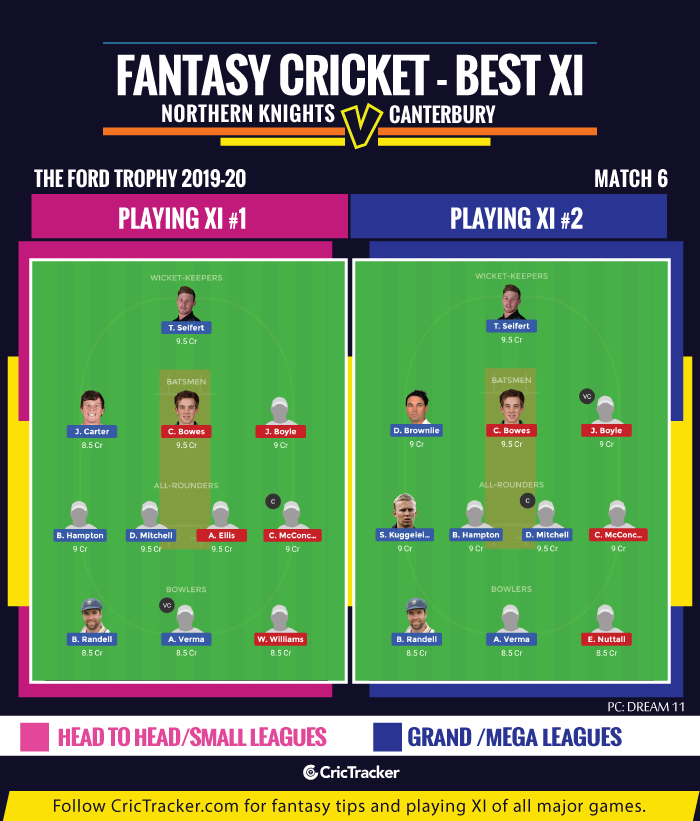 Both Northern Districts and Canterbury have players with dual roles. Hence, the likes of Daryl Mitchell, Brett Hampton and Cole McConchie will be crucial in the fantasy leagues.

The Northern Districts are expected to bounce back with a win.