The greatest of the modern era debate: Why Kane Williamson and Steve Smith are way ahead of Virat Kohli in Tests

The greatest of the modern era debate: Why Kane Williamson and Steve Smith are way ahead of Virat Kohli in Tests

As things stand at the moment, Steve Smith and Kane Williamson are well ahead of Virat Kohli in Tests. 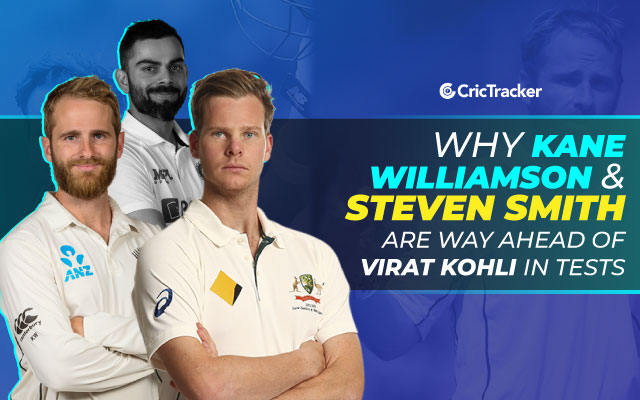 The Fab Four. If you have followed Test match cricket even casually in the last decade, there is every chance that you would rattle out the four names even before it is mentioned in this piece. Indian skipper Virat Kohli, batting Genius Steve Smith, England captain Joe Root and New Zealand maestro Kane Williamson form an illustrious quartet of willow wielders of the modern era.

The Fab Four- An Overview 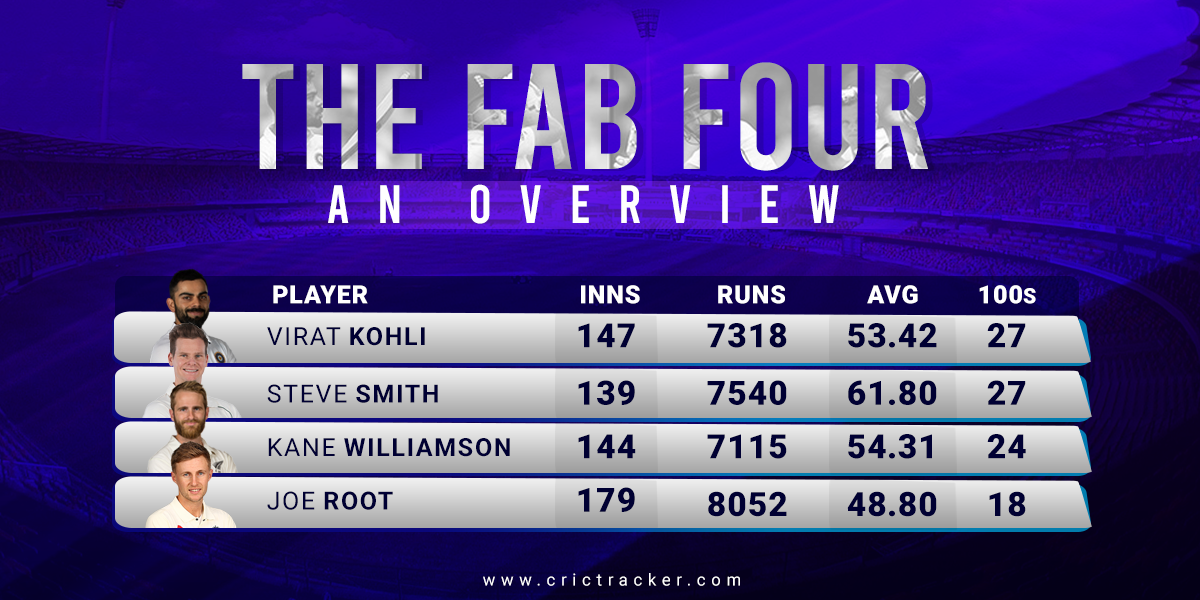 From the above table, we can see that Root has the lowest average among the Fab Four. Also, Root has scored the least number of hundreds among the four batsmen as well, in spite of featuring in the most number of innings. That’s it, about Root. Let us move on.

Another interesting thing is, at first glance, it might look as if there is nothing much to choose between Williamson and Kohli. Both the batting behemoths average around the 54 mark (Williamson slightly higher, and Kohli a tad lower) and both have scored over 7000 Test runs. Also, while Kohli has scored 27 Test hundreds, Williamson has 24 three-figure scores in the whites.

And, of course, Steve Smith’s numbers in Tests with the bat put him at a different plane. But then, in the course of this article, let us find out why both Smith and Williamson are actually way ahead of Indian batting star Virat Kohli.

Here, let us compare the three batting greats in terms of their three-figure scores helping their side to win a Test match. The same will be reflected in the table below. 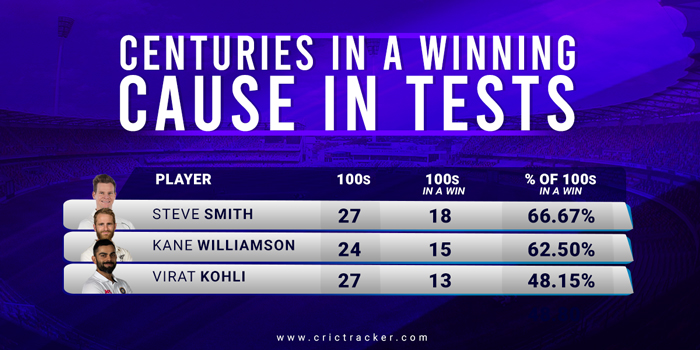 The above table helps us to understand the impact that a three-figure score from the three batting giants has on the result of the game. Out of Smith’s 27 Test hundreds, as many as 18 of them have resulted in a win for Australia, which translates to a colossal 66.67%. Williamson has scored 15 out of his 24 hundreds in a winning cause for the kiwis, which translates to 62.5%. When compared to these two, Kohli’s record is pretty ordinary. Out of his 27 Test hundreds, only 13 have resulted in a win for his country, meaning he has scored just 48.15% of his Test hundreds in a win.

Now, as we go deeper, the differences will widen. Let us take the plunge then…

Now, let us go ahead and compare Kohli, Williamson, and Smith in terms of their ability to get their side beyond the finish line in away shores. The table below will illustrate the same. 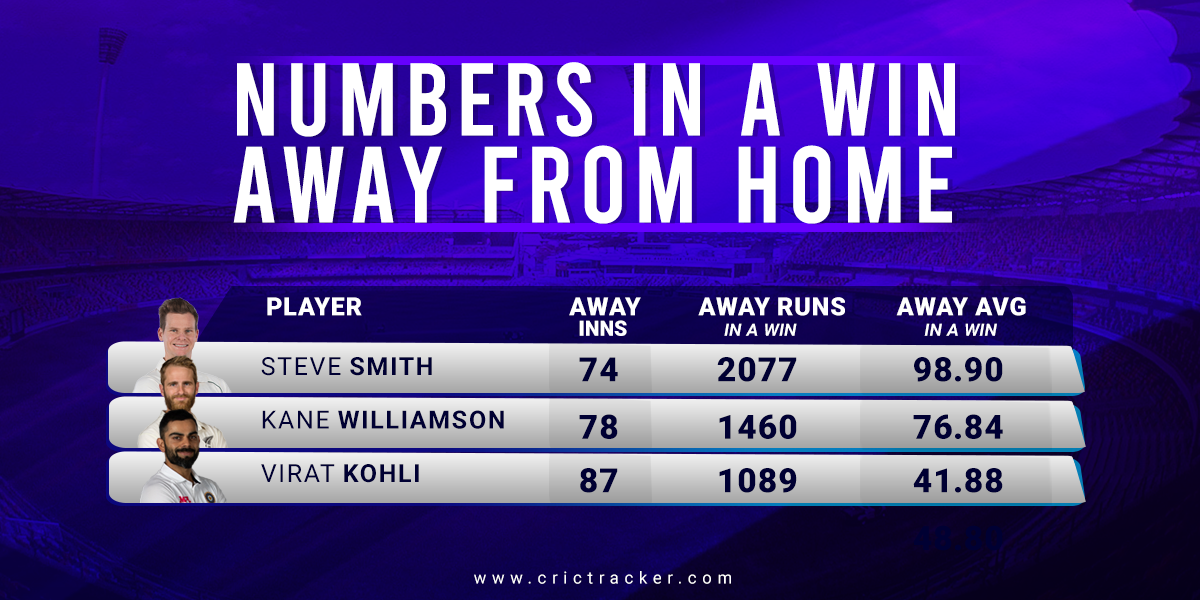 This table helps us understand the gap that exists between Kohli, and the other two willow wielders. In spite of playing the most away innings among the trio, the Indian skipper has the least number of away runs in a win. In fact, Smith has scored 988 runs more than Kohli in a win away from home in spite of playing 13 innings lesser than him.

Also, Kohli’s away average in a win is just 41.88. On the other hand, while Smith averages an unreal 98.90 in a win away from home, Williamson’s average is a stunning 76.84 in a Test win away from home. There is no doubt that Kohli still has a long way to go, to match his illustrious counterparts.

Now, let us analyze the three-figure scores of the three batting behemoths, and see how many of their centuries in away shores have resulted in a victory for their side. 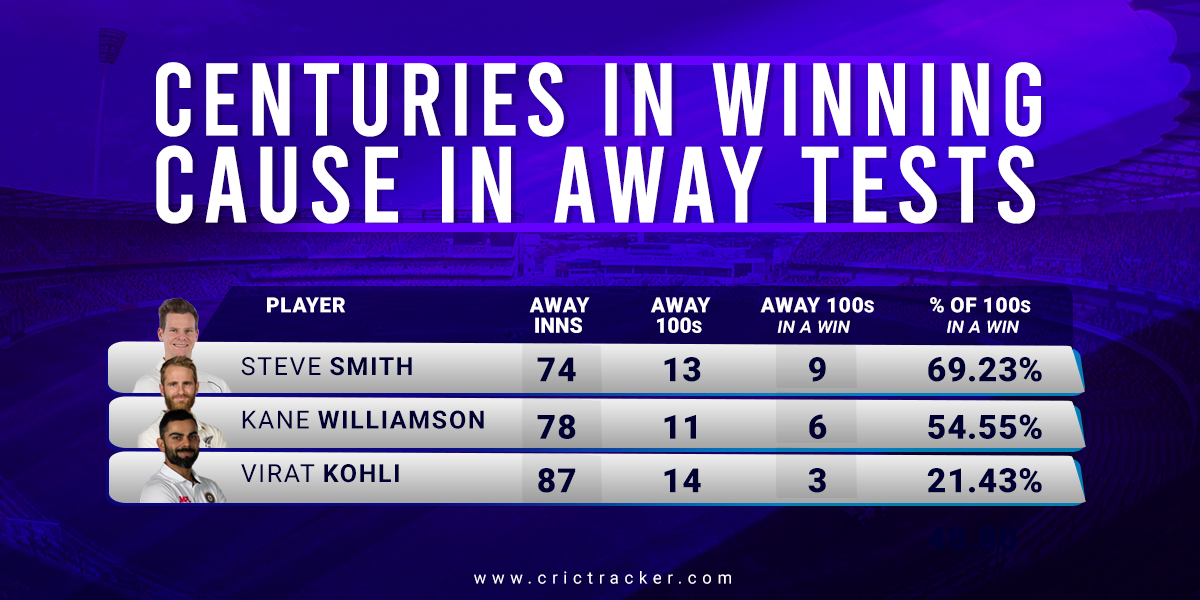 In spite of scoring the most away hundreds (14) among the trio, Kohli’s ability to get his side across the finish line in an away Test pales in comparison to Smith and Williamson. Out of the 13 away hundreds that Smith has scored, as many as 9 of them have resulted in a win, which translates to a whopping percentage of 69.23%.

Williamson has scored 11 away hundreds, and 6 of them have resulted in a victory for the kiwis, which translates to a percentage of 54.55%. But for Kohli, the numbers are very ordinary. Out of the 14 three-figure scores that the Indian skipper has scored away from home, just 3 have resulted in a victory, which translates to just 21.43%. It is clear that Smith and Williamson are miles ahead of Kohli when away numbers are delved into.

Yes. Kohli is a batting icon. Yes, he is India’s batting talisman. But then, as compared to Williamson and Smith, the Indian skipper is way behind. The difference is quite huge, and Kohli has a lot of catching up to do. Kohli is a fighter, he is someone who strives to be the best. And, there is no doubt that in the coming years he will strive to get his side across the finish line in every game that he plays. But then, as things stand at the moment, Smith and Williamson are well ahead.