Moeen Ali is available to play for the Birmingham Phoenix.

It is absolutely fitting that the final of the inaugural season of The Hundred will be played between the top two teams of the tournament. Birmingham Phoenix won six matches out of eight in the league and topped the table. Liam Livingstone struck form at the right time for them in Moeen Ali’s absence. Moreover, they are on a five-match winning streak and have been bolstered with skipper Moeen’s return for the final.

The Southern Brave, on the other hand, won five matches out of eight to end the league stage at the second place. Like their opponents, they are also on a winning streak having won four matches on the trot. They literally crushed the Trent Rockets in the Eliminator and that will give them some confidence ahead of the big game. Craig Overton’s availability has also made the big difference for the Brave.

This will be the second match of the day at the same venue. Pitch might play a crucial role but the Men’s matches at Lord’s have witnessed high scores so far. Team winning the toss should opt to bat first.

Liam Livingstone hands down has to be the best player for the Phoenix. He had a blockbuster game to end the league stage where he smacked a brilliant half-century and also picked up three wickets. Overall, Livingstone has amassed 302 runs in eight innings at an awe-inspiring strike-rate of 171.59 with three half-centuries. He is unlikely to bowl in this game given the weather forecast but his four wickets in the tournament have come at a crucial time.

Tymal Mills’ stocks have suddenly increased with the T20 World Cup to be played in October and November later this year. He has so far picked seven wickets in nine matches and has impressed the most with his slower balls. Most importantly, the left-arm pacer has gone unscathed in the competition without any injuries. If he helps the Brave to win the trophy with his bowling in the final, he could well lead England’s bowling attack in the UAE.

Southern Brave are expected to win this match. 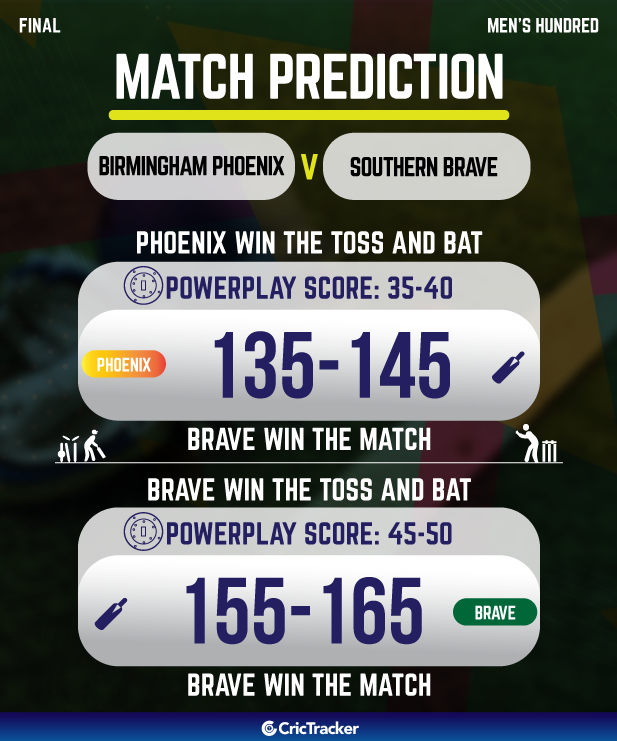