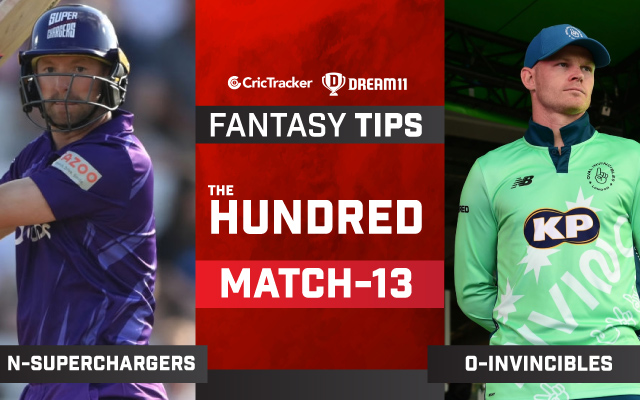 Northern Superchargers will take on Oval Invincibles in the 13th match of The Hundred Men’s 2021 on Saturday. Northern Superchargers are reeling at the bottom of the table with only one point. They still haven’t found their combination right, which is affecting them a lot. The unavailability of Ben Stokes makes matters even worse for them.

On the other hand, Oval Invincibles started off well with a convincing win over Manchester Originals in the tournament opener. Their second fixture was abandoned due to rain. They currently occupy the 4th spot in the standings with 3 points. Sam Curran won’t be available for the rest of the tournament and he is a big shoe to fill.

It’s a batting-friendly track, where it will be difficult to control the runs-flow in the initial overs. Later, as the match goes on, the spinners will come into play. Whoever wins the toss should bat first and put runs on the board.

Harry Brook has grabbed the opportunity with both hands in the newest format of the game. Coming back from a successful T20 Blast tournament, he has carried the same form into Hundred as well. In 2 matches, Brook has scored 100 runs at an average of 50, with the highest score of 62.

Jason Roy is a fearless batter. He has got tremendous power and knows how to pace the innings. A Big inning is expected from him bat in this match.

Mystery spinner Sunil Narine was economical in the opening game against Manchester Originals, where he conceded just 22 runs from his 20 deliveries, and more importantly, picked up a wicket.

Adil Rashid has always been a reliable bowler for England in white-ball cricket, and he is doing quite well in this format as well. In 2 matches, he has scalped 3 wickets, conceding 1.47 runs per ball.

Reece Topley might not have a fiery pace, but he effectively uses his height and hits the deck hard. He has got one wicket to his name in this tournament.

Sam Billings is an innovative player and got a wide range of shots in his arc. He played an excellent knock in the opening game against Manchester Originals, where he missed a half-century by one run.

NOS vs OVI Must Picks for Dream11 Fantasy Cricket:

Tom Kohler-Cadmore has scored 24 runs in 2 matches at a strike rate of 126.31. Considering his average performances he is a risky captaincy pick for your fantasy teams.

Will Jacks is an impressive young all-rounder who scored 15 runs in the opening game against Manchester Originals. You can take a risk and pick him as your fantasy team skipper.

Jordan Clark will be a likely replacement for Sam Curran. It isn’t going to be easy for him to straight away perform in the first match. It’s better to avoid him while making your fantasy teams.