Alex Hales will be dangerous if he plays long. 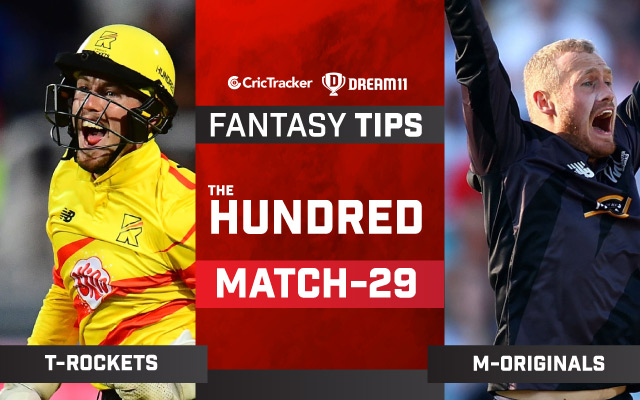 Trent Rockets will lock horns with Manchester Originals in the 29th match of the Hundred Men’s 2021 on Sunday. A defeat in their previous game against Birmingham Phoenix made things worse for the Trent Rockets in terms of their playoff qualification. They are still in the hunt, but must win this match by a massive margin. They have placed themselves at the 4th spot in the standings with 8 points.

Manchester Originals are already knocked out of the playoffs contention. They lost to London Spirit by 6 runs, which ended whatever hopes they had. Colin Ackermann’s gritty knock couldn’t save them either. They want to end their journey with a win.

Over 300 runs have been scored in the previous match between Trent Rockets and Birmingham Phoenix, which clearly shows it’s an excellent track to bat on. A target of more than 150 automatically puts teams chasing under a tremendous amount of pressure.

Alex Hales is a key player for Trent Rockets at the top of the order, but he hasn’t capitalized on the starts he is getting in this tournament. That being said, he is still the leading run-scorer for his side with 163 runs in 7 matches.

Colin Munro will be gutted not to find a place in New Zealand’s T20 World Cup squad. He has scored the most runs for Manchester Originals in this tournament, with 120 runs in 6 matches.

Lewis Gregory is a useful all-round cricketer, who has scored 96 runs and has also picked up 2 wickets so far in this tournament.

Colin Ackermann deserves all the credit for his fighting knock of 53 runs from 40 deliveries in the previous match against London Spirit. Overall in this tournament, he has scored 88 runs in 4 innings and has picked up a wicket as well.

Rashid Khan has scalped 9 wickets in 7 matches, which is the most by any player for Trent Rockets in this tournament. He is also a handy customer with the bat lower down the order.

Wrist spinner Matt Parkinson is the pick of the bowlers from Manchester Originals in this competition. He has picked up 7 wickets in 5 matches, with the best figures of 4/9.

TRT vs MNR Must Picks for Dream11 Fantasy Cricket:

Steven Mullaney has scored 70 runs in 3 innings and has picked up a wicket as well. He had a good game against Birmingham Phoenix, where he scored 49 runs. You can take a risk and pick him as your fantasy team skipper.

Carlos Brathwaite is a big hitter and is capable of picking wickets with the ball as well. Considering his decent performances, he is a risky captaincy pick for your fantasy teams.

Tom Moores bats are generally in the middle order and there is less scope for him to fetch more points. Hence, it’s better to avoid him while making your fantasy teams.