Expect the team winning the toss to bat first.

The climax of the inaugural season of The Hundred is here. The Southern Brave will face the Oval Invincibles in the final of the tournament at Lord’s. The Invincibles will enter the contest with some momentum having won the thrilling game in the eliminator against the Birmingham Phoenix. The Brave, meanwhile, will miss their opener Smriti Mandhana to be with the family ahead of India’s Australia tour.

As far as the form is concerned, the Brave ended the league stage at the top of the points table with seven wins and lost only to Manchester Originals in the rain affected game. The second best side in the table was only with four wins and that is Oval Invincibles who have won three of their last four matches. They have the momentum with them at the moment and expect this to be a thrilling game at the Home of Cricket.

The surface at the Lord’s, if the recent ENG vs IND Test match is considered, was on the slower side. There was no pace in the pitch and it might lead to scores around 120-125 being enough to defend. With this being the pressure game, teams are likely to opt to bat first.

Probable Best Batter of the Match

Sophia Dunkley is in amazing form in this tournament. Batting at three, she needs to step up again in the absence of Mandhana. She is only five runs behind the league’s top run-getter Jemimah Rodrigues. Dunkley has so far scored 244 runs in eight innings at an average of 48.80 and a brilliant strike-rate of around 143. Clearly, a lot will depend on how she hold one end during the batting innings of the Brave.

Probable Best Bowler of the Match

This girl has been in the form of her life. She is way ahead in terms of most wickets picked. Tash Farrant lit up the Kennington Oval in her team’s comeback win picking up four wickets for just 10 runs. Overall her tally of wickets has gone up to 18 which is exceptional and overall, her runs per ball (RPB) reads only 1-08 which is again brilliant. Farrant’s variations will play a crucial role, more so if the Oval side is defending the total.

The team batting first is expected to win the match. 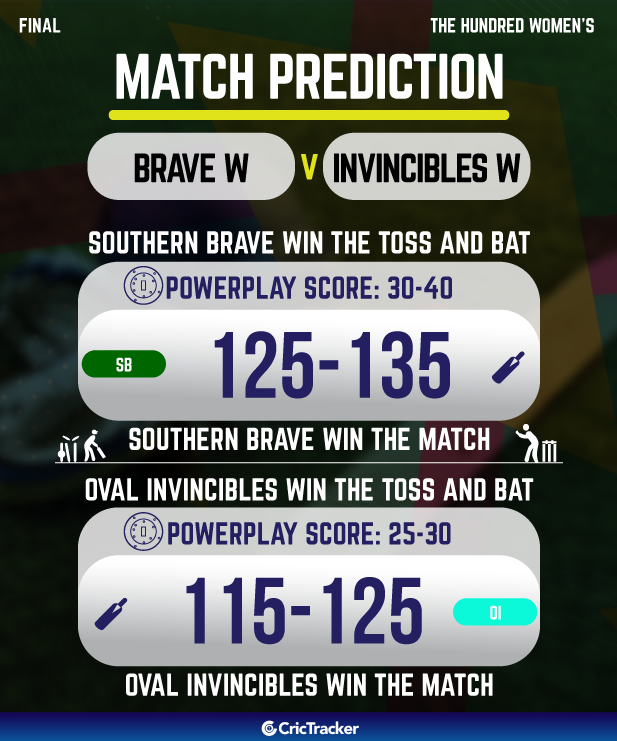