Sreesanth hailed Warner and Smith, and said that he is looking forward to bowl against them one day. 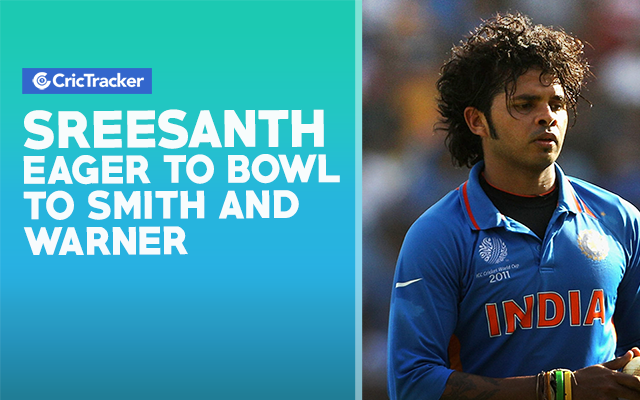 No Indian can forget Sreesanth grabbing Misbah-ul-Haq’s catch which helped MS Dhoni and Co to lift the inaugural T20 World Cup trophy. It was certainly a tournament to remember for the Kerala pacer as he delivered many impressive performances during the course of the showpiece event.

Along with his title-winning catch, Sreesanth is also remembered for his rampage against Australia in the semi-final. Matthew Hayden, who was on the verge of snatching the win away from India, was bamboozled by Sreesanth’s rapid yorker, which left the off-stump lying flat on the ground. Sreesanth, as expected, flaunted his high-spirited attitude and thumped the ground to indicate India’s resurgence.

However, the life ban, which was later cut short to seven years, served as a roadblock in Sreesanth’s career path. Like Sreesanth, two Australian stalwarts– David Warner and Steve Smith– also had to serve bans after their involvement in the infamous ball-tampering scandal.

Both Warner and Smith were slapped with a one-year international ban by Cricket Australia (CA) for their involvement in ball-tampering in South Africa. After serving their bans, the Australian duo made a strong return to international cricket and it has never looked back since then.

Steve Smith and David Warner didn’t give up: Sreesanth

In an Instagram Live with CricTracker, Sreesanth lauded the duo its re-emergence and revealed that the comeback story of Warner and Smith has helped in motivating him.

According to 37-year-old Sreesanth, he lost seven years of his life without even being involved in the match-fixing incident. Itching to brace the field again, Sreesanth hailed Warner and Smith, and added that he is looking forward to bowl against them one day.

“Cricket Australia (CA) gave Smith and Warner permission to play Global T20 Canada. They came back and performed well, that motivated me, I should be thankful to them. They persisted with the game and they didn’t give up,” Sreesanth told host Adarsh Raman during the Instagram Live with CricTracker.

“Without being guilty I’ve lost seven years of my life. Still, people call me a fixer, but I say them ‘I respect Supreme Court Judgement’. I had 12 surgeries as a fast bowler, I just want to get back and bowl. Smith and Warner showed me a way forward but I am looking forward to bowl to them for sure,” he added.