Chris Green has made his way back into the squad after missing the last game due to a calf injury.

The Sydney Thunder had a bit of jitter in their last two games, losing to the Perth Scorchers and Sydney Sixers. However, with six wins from 10 games with a net run rate of 1.129, Callum Ferguson and Co are placed second in the points table.

Their next match is against the Hobart Hurricanes on Monday, January 18 at the Manuka Oval in Canberra. The Thunder would dearly want a victory. On head-to-head, the Hurricanes are leading the Thunder by 8-6, but six of those eight wins came at the Bellerive Oval.

The Hurricanes, in the meantime, are on a three-match losing streak. However, a win can take them back into the top four. For the next game, they won’t be having the services of Colin Ingram. For the Thunder, Chris Green has made his comeback after recovering from a calf injury.

The pitch in Canberra has been an excellent one for batting. The bowlers haven’t had much to cheer for bowling on the deck. The track isn’t expected to change in nature going forward as well.

The team, batting second has tasted quite a bit of success and hence, chasing should be the way forward. The temperature will be around the 25 degrees Celsius mark. There are no chances of rain whatsoever.

Playing Combinations for THU vs HUR

Alex Hales has been outstanding for the Thunder in the tournament. In 10 matches, the right-hander has scored 323 runs at an average and strike-rate of 32.30 and 161.50 respectively.

He bats at the top of the order and plays his strokes without nurturing any inhibition. When he has failed the odd time, the Thunder have strained. If he gets going again, the Hurricanes would be in for some trouble.

D’Arcy Short has been a fulcrum of the Hurricanes’ batting over the years. But in the ongoing edition, he hasn’t quite been at his best. In 10 matches, the left-handed batter has only notched 195 runs with a top score of 72.

Though he has a couple of half-centuries to show for his efforts, he also has two ducks. But bearing in mind the quality he has, Short can make a telling impact in the next match. 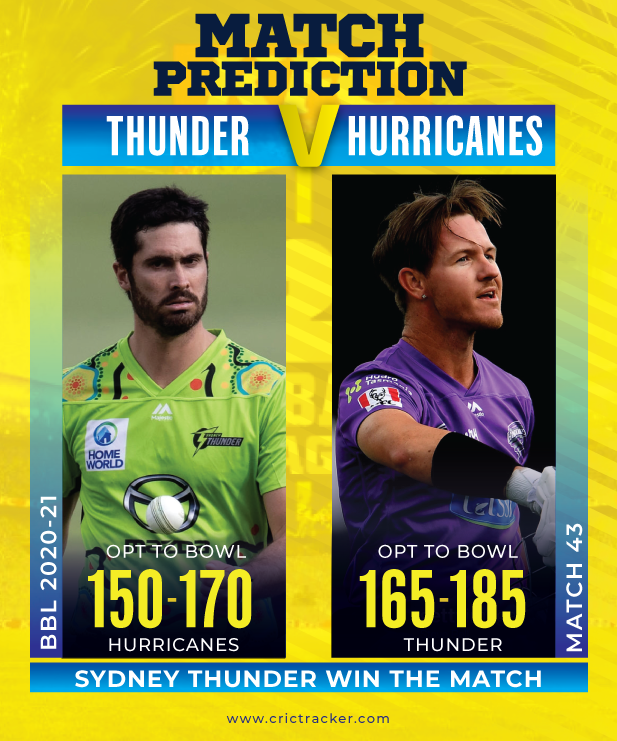