Pakistan team left struggling at the score of 96 on Day 2. 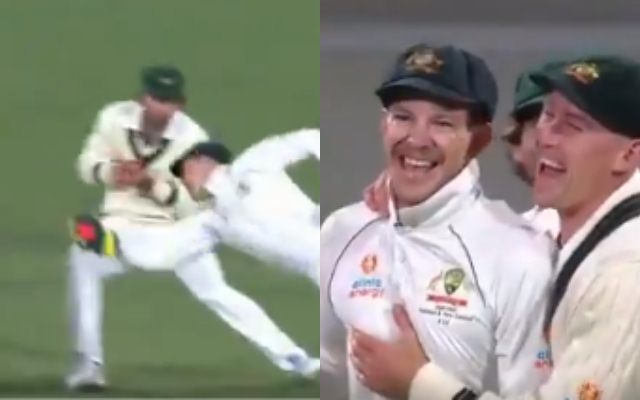 David Warner, the left-handed Australian opener hogged the spotlight on Day 2 of the 2nd Test with his triple century. It was all about the hosts’ brilliant batting and their lethal bowling on Saturday. The left-handed opener looked elegant with the bat and played a majestic knock of 335* runs. He shattered many big records during his marathon knock. Warner became the second player to score a triple ton in a Day-Night Test. His knock helped the hosts to post a mammoth total of 589 at three wickets.

When the opener was heading towards the score of 400, suddenly Tim Paine declared the innings. The decision attracted the critics, who started mocking the Australian captain for taking such a poor decision. Paine, who didn’t get the opportunity to bat, contributed well with his wicket-keeping skills. He took an amazing catch of Iftikhar Ahmed that left everyone in awe.

The Pakistan batting collapsed in front of Australian fast bowlers. Michell Starc bowled at his helm best and ended up taking four wickets on Day 2. Once again Pakistan’s top order failed to score runs and their side was left struggling after losing six wickets for 96 runs.

The Day 2 went onto the name of David Warner. Paine also took a blinder behind the stumps which was one of the highlights for the day. The instance happened in the 31st over of the innings that was bowled by Michell Starc.  The Australian pacer was spotted exchanging some words with Iftikhar Ahmed (10) in the previous over in order to distract his focus.

On the second delivery of the 31st over, Iftikhar attempted to play a fine cut on a short-pitched delivery of Starc. However, the ball went past the willow while taking a thick edge. Paine, who was the wicket-keeper, plucked a one-handed stunner while diving to his right.

At the end of the second day, Babar Azam walked off the ground with 43 runs from 67 deliveries to his name alongside Yasir Shah (4). With follow-on on the cards, Pakistan need to come back strong on Day 3. Otherwise, they might have to suffer a whitewash in the Test series in which they are already lagging behind by 1-0.

Here is the video