Dolphins will be looking to continue their winning run in the CSA T20 Challenge when they face Titans in their final league game.

The 15th match of the CSA T20 Challenge 2021 will be played between Titans and Dolphins at the Hollywoodbets Kingsmead in Durban.

The match will start at 6:00 PM (2:30 AM local time). The live streaming of the match will be available on Hotstar’s app and website.

The final match of the league phase of the CSA T20 Challenge will take place between Titans and Dolphins. Dolphins are currently at the top spot in the points table while Titans are lying at the third spot. Dolphins have won all of their four games so far and have already booked their place in the playoffs. They will be looking to end the league stage on a winning note to have the momentum on their side in the playoff.

Titans, on the other hand, have won two of their first four games and only have a slim chance of making it to the playoffs. Even if they beat the Dolphins, they need second-placed Lions to lose their game against Cape Cobras. Not only that, but the Titans also need to win big in order to improve their net run-rate.

Chris Morris has to be a good captaincy pick for this match as he can pick wickets upfront and in the death overs as well. Moreover, he can tonk the ball with the ball. Though he has only scored 31 runs in four innings, it is only a matter of time before he clicks.

The Dolphins skipper Keshav Maharaj is another captaincy option. It is a risky move to make bowler a captain in Fantasy but the pitch in Durban is degrading with every match. If Dolphins bowl second, then Maharaj can spin his web. He has so far picked seven wickets in four matches at an average of 7.85 and has conceded runs at an economy of only 3.43. 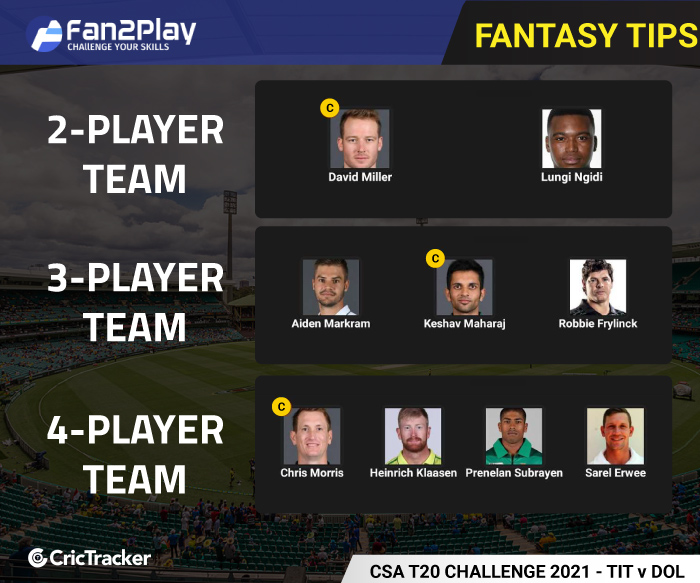