Morris should be a good captaincy pick for this match.

The 11th match of the CSA T20 Challenge 2021 will be played between Warriors and Titans at the Hollywoodbets Kingsmead in Durban.

The match will start at 1:30 PM (10 AM local time). The live streaming of the match will be available on Hotstar’s app and website.

When Titans and Warriors lock horns against each other, fans can expect a good contest of cricket. Titans have won two of their three matches so far and would look to have another win against their name. If Titans manage to beat the Warriors in this match, we will surely see them having more chances of securing a spot in the knockout stages of the tournament.

Warriors, on the other hand, have lost both their matches in this tournament so far. Their team hasn’t really been up to the mark. But, as the competition moves towards the business end, it will be interesting to see how they buckle up to try and finish in the top three. Titans and Warriors have met in several T20 matches before and have produced some classic battles and this match could just be an addition to that list.

Morris is one of the best all-rounders in T20 cricket at the moment. He has got the complete package which the format needs and has been too good doing all the things, asked of him. In this tournament so far, he played three matches and managed to pick three wickets with the ball. But, his economy of 3.96 is just tremendous. He has also scored 30 runs at a strike rate of 166. All these attributes make him a good choice for the captain.

JJ Smuts is one of the most experienced T20 players in South Africa. He hasn’t been in top form for his side in this tournament so far. He is yet to pick a wicket and has managed only 43 runs in two innings. However, he has scored over 3,500 runs in T20 cricket and taken 84 wickets. All this experience should come in handy for the Warriors team when they look to bounce back. 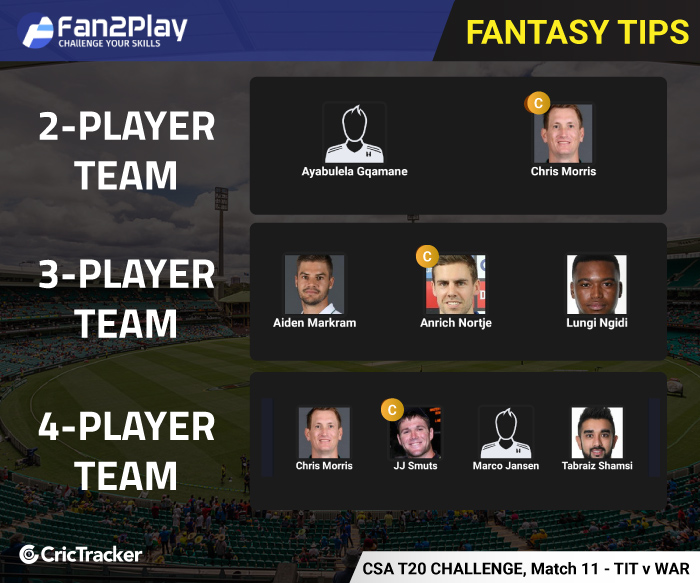