The 1st Semi-final of the Andhra T20 League will be played between Titans XI and Chargers XI at Rural Development Trust Stadium, Anantapur.

Titans XI will play against the Chargers XI in the 1st Semi-final of the Andhra T20 league. Titans XI were the first team to qualify for the semi-finals. They finished as table-toppers in the league stage, having won 8 of their 10 matches. They are coming into this match as the favourites, as they defeated Chargers XI on the last two occasions. S Tarun and Lalith Mohan have been on fire for them in this competition. Shoaib Mohammad Khan has led the side really well and he will be hoping to take his team to the finals by beating Chargers XI for the third time in the same competition.

On the other hand, Chargers XI have narrowly managed to qualify for the semi-finals,. They had the same 6 points as the Legends XI and Warriors XI, but were ahead on Net Run Rate. They are coming into this match on the back of a defeated against Kings XI by 27 runs. They have won 3 and lost 7 matches in this tournament. It will be foolish to take them lightly, as they too have some quality cricketer in their ranks like K Srikar Bharat and K Sai Rahul. Hence, it is going to be an interesting battle between these two teams.

It will be partly cloudy in Anantapur, with the temperature ranging between 27 to 30 degrees Celsius. The worrying news is that there is a 40% chance of precipitation for this match.

There is equal support for the bowlers, especially for the seamers. Since rain is expected during the course of the match, whoever wins the toss should look to bat first.

Lalith Mohan is the second-highest wicket-taker in this tournament, he has picked up 19 wickets at an economy of 6.87.

K Sai Rahul is the leading wicket-taker so far in this tournament, having picked up 20 wickets with an economy rate of just 6.59 runs per over. With the bat, he has scored 184 runs at an average of 23 and a strike rate of 128.6.

Also Read – I entertained Pakistan cricketers with my batting and singing: Virender Sehwag 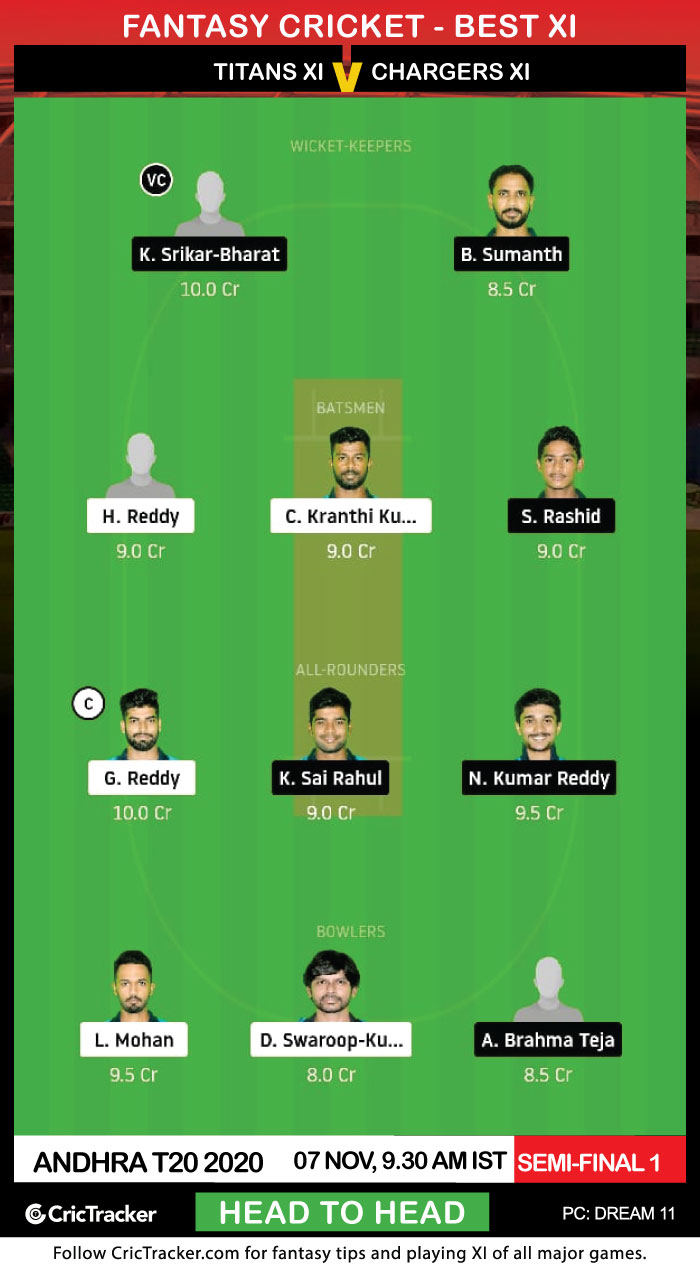 Both the team’s all-rounders are performing well for their respective sides. Hence, it is advisable to include 4 all-rounders in at least one of your Dream11 Fantasy teams.

Titans XI are expected to win this match.