Top 5 legends and their Cricket NFTs in the Rario Marketplace

Top 5 legends and their Cricket NFTs in the Rario Marketplace

Some prominent cricketers feature in the list including Kumar Sangakkara, Dale Steyn, AB de Villiers among others 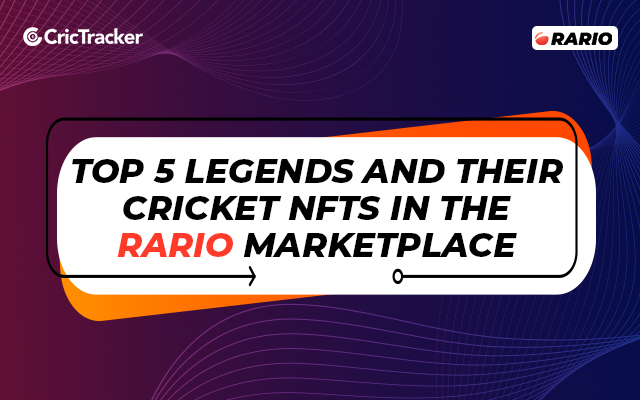 Rario is the first-ever cricket NFT platform and it has also partnered with several prominent players from across the world. Some of the prominent players who are associated with Rario include AB de Villiers, Aaron Finch, Faf du Plessis, Rashid Khan, and Jason Holder from the international arena. Among Indian veterans, Virender Sehwag, Zaheer Khan, and young sensational players like Ruturaj Gaikwad and Smriti Mandhana have also signed deals with Rario.

Now imagine owning an NFT of one of the aforementioned players! Wow! Isn’t it? Rario provides some of the brilliant moments of most of the players associated with them in the form of NFTs and these cards are divided into four different categories based on their rarity and circulation. Silver, gold, black and unique are the four different types of cards available on Rario with only Unique type of cards yet to be available on the marketplace.

Now which cricket fan wouldn’t want to own an NFT of AB de Villiers’ scoop shot? Who would want to miss Dale Steyn’s unplayable ripper? Not many, right? Then quickly sign up on Rario and get your hands on cricket NFTs of some of the legendary cricketers. On that note we bring you five legends and their cricket NFTs present in the Rario marketplace.

Let us take a look at five legends and their Cricket NFTs present in the Rario Marketplace:

A modern-day legend, AB de Villiers ‘Silver Tier‘ Moment Card is available at the Rario Marketplace for as low as just $19. The right-handed batter played one of his favourite 360-degree shots during a group stage match against St. Kitts Nevis and Patriots during CPL 2016. De Villiers was facing his national teammate Tabraiz Shamsi as he walked across the stumps and whipped it past the man at short fine leg only for the ball to reach the boundary in no time.

Universe Boss and T20 cricket legend Chris Gayle is one of the most popular characters in the Rario marketplace. One of his ‘Gold Tier’ moments can be purchased by the cricket enthusiast. The left-handed batter’s glass-shattering six came against the Barbados Royals during CPL 2021. As Jason Holder bowled a fullish length delivery, the T20 legend came down the track and smacked the ball so hard that even scared the commentators with the ball coming their way. It ended up shattering the press box window in the process.

One of the greatest batters to ever play the game of cricket, Sri Lanka batter Kumar Sangakkara played an audacious ramp against the Australian legend Shane Watson during a group stage match of CPL 2017. It was a brilliant shot from the legendary cricketer who changed his batting style according to the modern-day requirement to play one of the toughest innovative shots. The moment is listed as a ‘Silver Tier’ Moment Card and can be availed after paying just $10.

South African pacer and veteran Dale Steyn sent Carlos Brathwaite’s leg-stump cartwheeling during a group stage encounter of CPL 2016. Brathwaite swung as hard as he could, but he could not connect and saw his stumps flying all over. The moment is ranked under ‘Silver Tier’ and is available at a minimum cost of $11.

Pakistan legend Shahid Afridi smoked his former national teammate Wahab Riaz for four consecutive sixes. Afridi remained unbeaten on a 17-ball 59 at a strike rate of 347 including 3 fours and 7 sixes. Pakhtoon posted a daunting 135 and won the match by 13 runs. It was a special performance by captain Afridi in a high-pressure Qualifier match as Pakhtoon went through to the Final with this win.