Who will create history on Saturday?

It is all set for a thrilling climax as India take on the England in the final of the ICC U19 World Cup 2022 at the Sir Vivian Richards Stadium in North Sound, Antigua, on Saturday, February 5. Both have been the top two teams in the tournament so far and at the same time are also undefeated and the team that holds its nerves on the big occasion will come out on top and be crowned champions.

While India eye a record fifth U19 title, England hunt for their first-ever since 1998. A scintillating 11o from skipper Yash Dhull and an impactful 94 from Shaik Rasheed in the semis propelled India to a stiff total of 290 which was good enough to knock Australia out of the competition.

England, on the other hand, have also played an outstanding brand of cricket to come this far. After a fine knock of a quickfire 42-ball 88 from opener Jack Bethell against South Africa in the quarterfinals, the English team had found themselves in a spot of bother against a spirited Afghanistan. They were reduced to 92/4 before an unbeaten 56 from the middle-order batter George Bell took them to a fighting total of 231/6.

However, they were made to fight hard for their win with vital knocks from opener Mohammad Ishaq (43) and Allah Noor (60) but the England bowlers staged a brilliant comeback at the backend of the innings and registered a 15-run win by DLS Method to advance to the finals.

England Under 19 vs India Under 19, Final

The pitches in the Caribbean for the ongoing U19 World Cup have been great for batting as well as bowling. While the batters have scored freely after getting set, even the bowlers have been able to get early wickets upfront. However, chasing has been a bit difficult and therefore, the team winning the toss will have no hesitation in batting first and transferring the scoreboard pressure on the opposition in the big final.

England Under 19 vs India Under 19 Head-to-Head

Angkrish Raghuvanshi-  Angkrish Raghuvanshi has been the standout player for India so far in this U19 World Cup. He has amassed 278 runs in five matches averaging 55.60 and a strike rate of 89.96 including a century and half-century and is also the leading run-scorer for the Boys In Blue in the competition. The Indian team who have made it to a fourth straight final would be relying on the 16-year-old from Delhi to matter once again in their quest for a fifth U19 world title.

Joshua Boyden: Joshua Boyden has been the best bowler for England in this tournament. He has been really effective with the ball in hand having registered 13 scalps in five games at an average of 9.53, an economy of 3.17, and a strike rate of 18. The 17-year-old would once again be hoping to make a tremendous impact with his left-arm medium pace as the English team look to make history by lifting their maiden U19 World Cup Trophy. 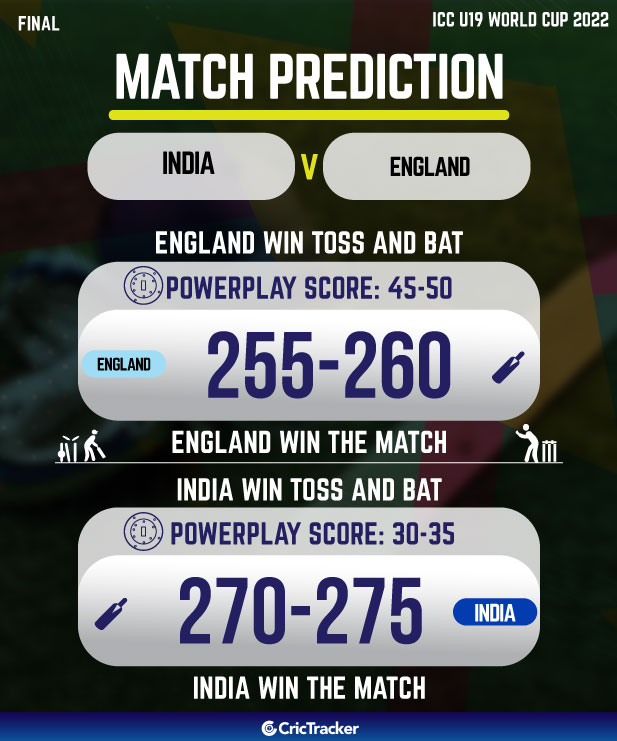