Smriti Mandhana's Trailblazers would be hoping to make amends after failing to make the final last time around.

The 2020 edition of the Women’s T20 Challenge got underway on Wednesday, November 4 in Sharjah with the match between Velocity and Supernovas. It’s now time for the second game at the same venue to be played between Smriti Mandhana’s Trailblazers and Mithali Raj’s Velocity.

It will also be the second time when the two teams will be locking horns after the encounter back in 2019. Their only match wasn’t a high-scoring affair by any means. Batting first, Trailblazers managed only 112 runs for the loss of six wickets.

Chasing the target, Velocity were going great before a flurry of wickets at the death threatened to push them away. In the end, they lost seven wickets but got over the line with 12 balls to spare. Another cracking game can be expected at Sharjah Cricket Stadium.

The pitch in Sharjah has been fairly good for batting. Quite a few high scores were racked up in the 2020 IPL. Though the batters have had their say, the spinners have come to the party, not only keeping a check on the runs but also picking up regular wickets.

The playing conditions will be pleasant with the temperature around the 29 degrees Celsius mark. The humidity will mostly be in the 60s.

Playing Combinations for VEL vs TRA

Shafali Verma has come up the ranks in the last one and half years or so. It was her attacking batting in the previous edition of the T20 tournament that brought her into the limelight.

She played some big shots and captured the imaginations of the fans. The youngster also was the standout performer for the Indian team in the Women’s T20 World Cup that took place back in February-March in Australia.

Sophie Ecclestone, the England left-arm spinner, is currently the number-one ranked T20I bowler in women’s cricket. Having picked up 56 wickets from 39 games, she has weaved magic more often than not.

The 21-year-old was in exceptional form in the Women’s T20 World Cup, making frequent breakthroughs. In the recent T20I series against the West Indies, she was on top of his game, picking up six wickets.

VEL vs TRA Head to Head

The prediction is for Velocity to win the match. 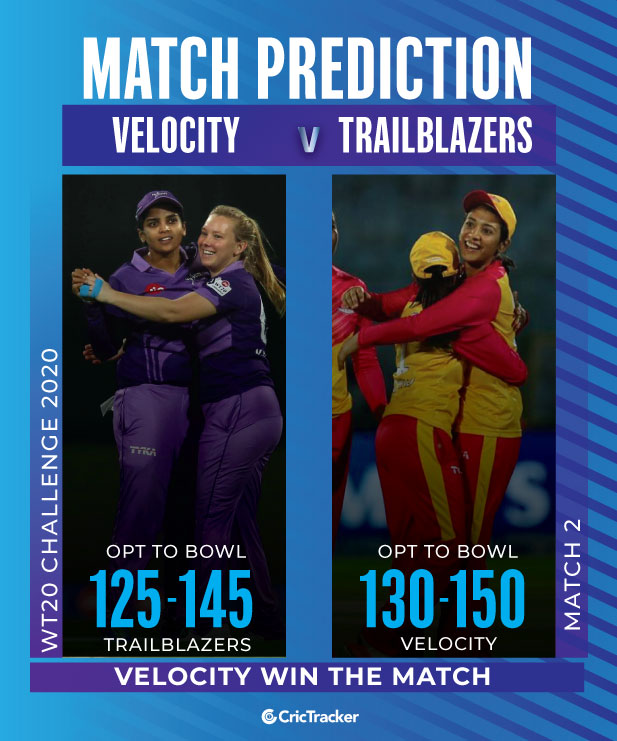