Gambhir scored a brilliant 151 against Kerala.

The Vijay Hazare Trophy is a platform for lots of young talented players to make themselves visible and come into contention for national selection. Meanwhile, it also gives capped players an opportunity to redeem themselves with outstanding knocks in the domestic circuit. And with a dozen matches taking place each day, the likelihood of witnessing a star player scoring big runs or snaffling a five-for is high indeed.

Friday’s Vijay Hazare Trophy matches witnessed a number of low scores. In as many as three matches, teams batting first weren’t able to go beyond the 150-run mark. Meanwhile, there were other teams who, while chasing, lost wickets in clusters, handing the opposition a victory by a huge margin. Nevertheless, amongst all the events in Friday’s VHT games, some of India’s most well-known players rose to the occasion to make valuable contributions to their sides. 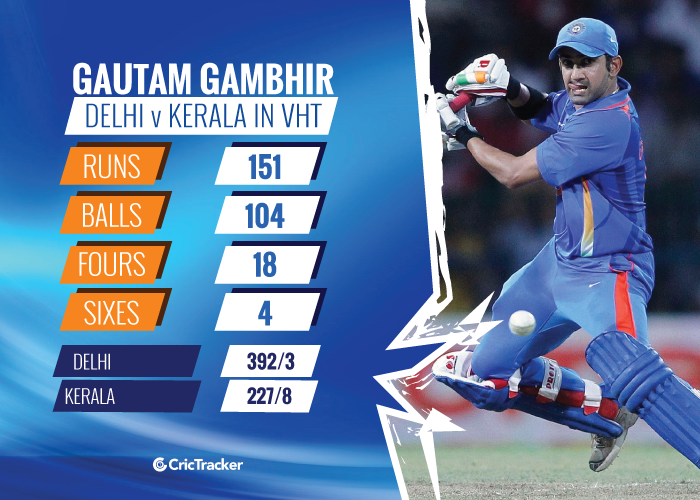 Left-hander Gautam Gambhir will forever be remembered for his heroic innings in the final of the 2011 World Cup which brought India within touching distance of lifting the trophy. Gambhir has made occasional appearances in the Indian team since but hasn’t been able to cement his place. However, the former KKR skipper came up with a blistering knock against Kerala in his hometown Delhi.

Opening the innings with Unmukt Chand, Gambhir smashed his way to 151 off just 104 deliveries. His innings included 18 fours and 4 sixes. After Chand fell, Gauti continued his imperious batting with Dhruv Shorey, who himself got to 99. Thanks to Gambhir, Delhi ended the innings with a whopping 392 on the board. Kerala were nowhere close to the target, losing the match by 165 runs. 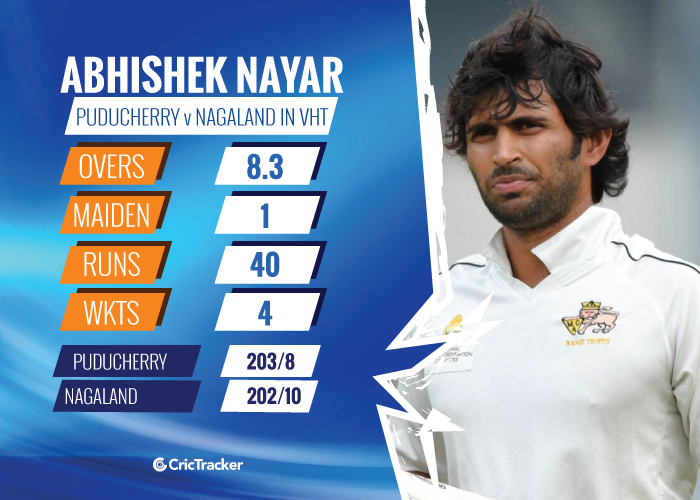 Pondicherry’s new team is being mentored by domestic stalwart Abhishek Nayar. Although the left-handed Nayar is known for his dominance with the bat, on Friday he stepped up to the plate with the ball. During Pondicherry’s encounter against Nagaland in the Plate Group, Abhishek Nayar turned his golden arm for his side to restrict the opposition to a mere 202 in the first innings. Off his 8 overs, the former Mumbai player bagged 4 wickets giving away 40 runs. Chasing a target of 203, Pondicherry stumbled but were eventually able to cross the line with 4 overs to spare. 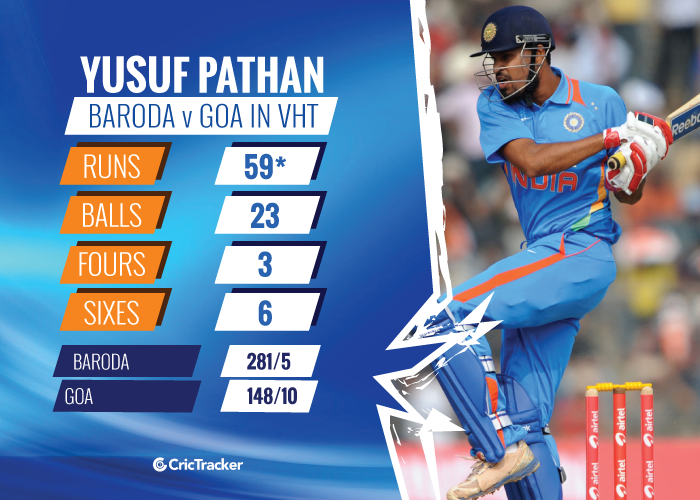 Yusuf Pathan’s power-hitting ability needs no introduction. The big man has done it time and again in the IPL and no boundaries are big enough once Yusuf begins to strike the ball cleanly. He disdainfully dispatches bowlers all around the park without having to move an inch from his crease. The Baroda veteran did something similar on Friday against Goa when the two teams met in Bengaluru.

Batting first, opener Kedar Devdhar set the tone for the Baroda innings. He struck a fine century before captain Deepak Hooda chipped in with 71. At no.5 came Yusuf Pathan who went ballistic right from the outset. With a strike rate of 256.52, Pathan smashed an unbeaten 59 off just 23 deliveries. His short innings included as many as 6 sixes and 3 fours. Baroda set a total of 281 for Goa, but Krunal Pandya’s 6-for meant Goa fell well short of the target. 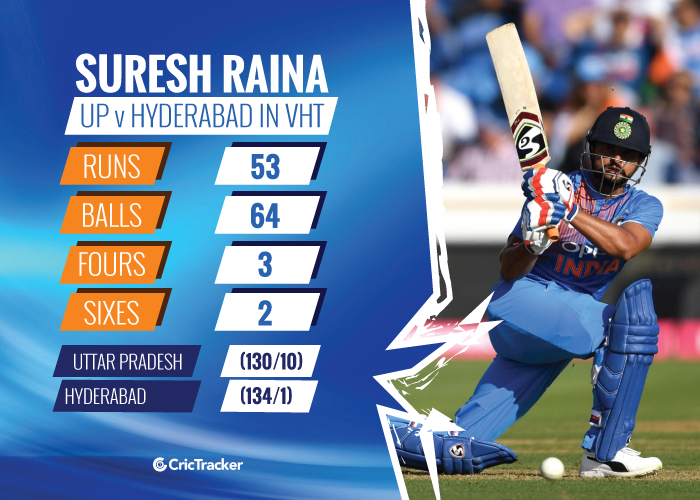 Captaining Uttar Pradesh in this edition of the Vijay Hazare Trophy, Suresh Raina brought up a useful half-century for his side against Hyderabad. Batting first, UP found themselves in a spot of bother at 42 for 3 when their skipper walked in. He stood his ground while wickets tumbled at the other end, before being dismissed for 53. However, such was UP’s overall batting performance that Raina’s knock was essentially inconsequential.

Uttar Pradesh were bundled out for a mere 130, which Hyderabad had no trouble chasing down. Nevertheless, Raina, who’s been axed from the Indian team, will look to put in more such performances to get back into contention for a place in the national squad.