Dinesh Karthik has played his part to perfection with 407 runs to his name in the tournament.

The Final of the Vijay Hazare Trophy 2019 between Karnataka and Tamil Nadu will be hosted by M. Chinnaswamy Stadium, Bangalore.

After a month-long tournament, it has now come down to two heavyweights in Karnataka and Tamil Nadu to battle it out for the Vijay Hazare Trophy 2019-20. Both teams have deserved their spot in the final with either side topping their respective groups. While Karnataka lost only one game this season, Tamil Nadu comes into this game with a perfect record. Karnataka’s top-heavy batting unit led the way once again as they beat Chhattisgarh in front of their home crowd by nine wickets. On the other hand, Tamil Nadu had to bank on Shahrukh Khan’s heroics with the bat to earn the opportunity to fight for the trophy on Friday.

Both teams are equally matched on paper. While Karnataka boasts of five players with international experience, Tamil Nadu tops them by one more international player. In spite of all the big names on both sides, it has been the relatively unknown duo of Devdutt Padikkal and Baba Aparajith, who have stood out with their bats doing all the talking. With 598 and 532 runs to their names respectively, all eyes will be upon them in this high-stakes encounter at Bangalore.

Although there is a chance of rain during the game, the final should be completed, with or without deductions in overs. A cloud cover of 70% is expected at the start of the game, according to AccuWeather and is expected to remain the same throughout the day. The temperature should hover around 24 and 26 degrees Celsius with a breeze also expected to blow from one end.

A decent batting track awaits both sides with the pitch at the Chinnaswamy Stadium traditionally being a high-scoring one. However, this year the bowlers have also enjoyed conditions with the average first innings score here being 263. Teams will prefer chasing with the threat of rain looming large

Devdutt Padikkal is in fine form for Karnataka. With seven 50+ scored in ten games, Devdutt Padikkal’s consistency has served Karnataka’s cause well. His opening partner, KL Rahul is third on the list for most runs with 546 runs this year. Both of them have notched two huge partnerships in the knockout games to lead Karnataka to the final.

Shahrukh Khan is the talk of the town with a sensational fifty against Gujarat. He has enjoyed a successful Vijay Hazare Trophy campaign with 217 runs at a strike-rate of 126.90 in the middle order. While Baba Aparajith is TN’s top runscorer, Dinesh Karthik has played his part to perfection. Although he has faded off late, he still boasts of 407 runs and looks good for more in the final. 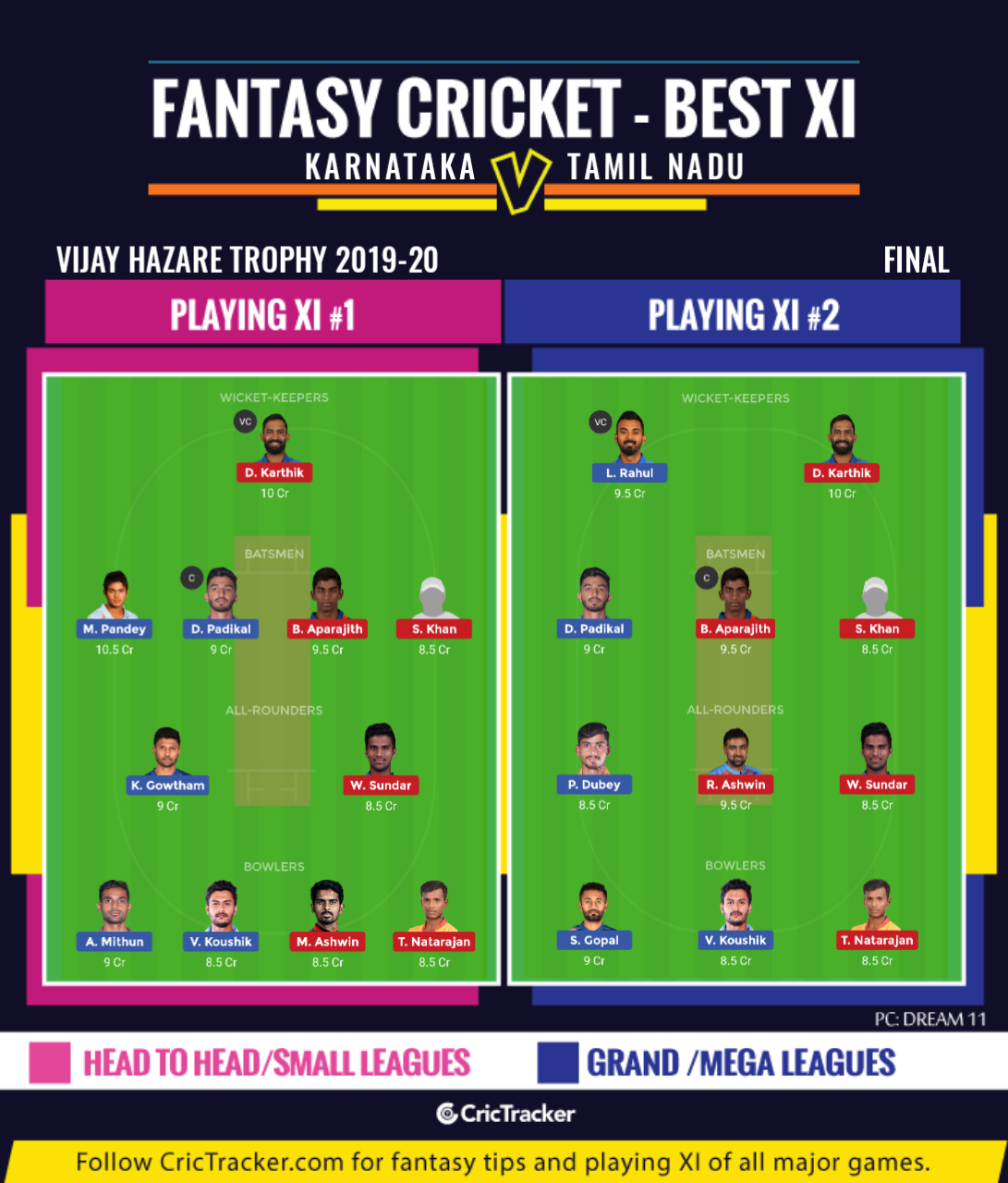 With a number of quality players available for this game, credits could be an issue. Shahrukh Khan, who is available for 8.5 credits, is a worth-while pick with the TN batsman scoring a fifty in the semi-final as well.

Both teams are well balanced although home conditions could play into Karnataka’s favour.