Dhawal Kulkarni sprung back to form with a fifer against Jharkhand.

The 4th Quarter Final of the Vijay Hazare Trophy 2019 between Mumbai and Chhattisgarh will be hosted by KSCA Cricket Ground III in Alur.

The fourth and final quarter-final pits defending champions Mumbai against a well-balanced Chhattisgarh side at the KSCA Stadium in Alur. Both sides sealed a knockout spot in their final games with only two points separating the two sides. While Chhattisgarh’s Veer Pratap Singh picked a fifer in the previous game, Yashasvi Jaiswal scored a superlative double hundred against Jharkhand to lead Mumbai to yet another quarter-final appearance.

Jaiswal has been the talk of the town with 504 runs in just five innings for Mumbai. Along with him, Aditya Tare and Shreyas Iyer have also complimented him well. The presence of Shivam Dube and Suryakumar Yadav certainly strengthens Mumbai’s status as the favourites for this game.

Nevertheless, Chattisgarh came away victorious in their previous meeting earlier to his season with Shashank Singh and Amandeep Khare pulling off a remarkable chase at this very venue. Considering Chhattisgarh’s unbeaten record here, they wouldn’t be fazed by Mumbai’s star-studded squad and certainly prove to be a formidable opponent in their bid to reach the semi-final.

While there is a threat of rain on Monday, at least a shortened game is expected to be completed. According to AccuWeather, a cloud cover of 95% is on the cards with the temperature hovering around 22 and 26 degrees Celsius.

Ashutosh Singh is Chhattisgarh’s top run-scorer this season with 368 runs in seven innings. With four fifties, Ashutosh will be key against the might of Mumbai’s bowling unit. Veer Pratap Singh has been the pick of the Chhattisgarh bowling with 15 wickets in five games. His ability to pick wickets with the new ball will be crucial against Mumbai’s opening pair of Jaiswal and Tare.

Yashasvi Jaiswal is another individual who has had a breakthrough year. Although he has played only five games, his tally of 504 runs, including a double hundred, makes him one to watch out for in this game. His captain, Shreyas Iyer is due for a big score with the Mumbaikar scoring only 217 runs in the middle order. These players should be picked in your Dream11 Fantasy team. 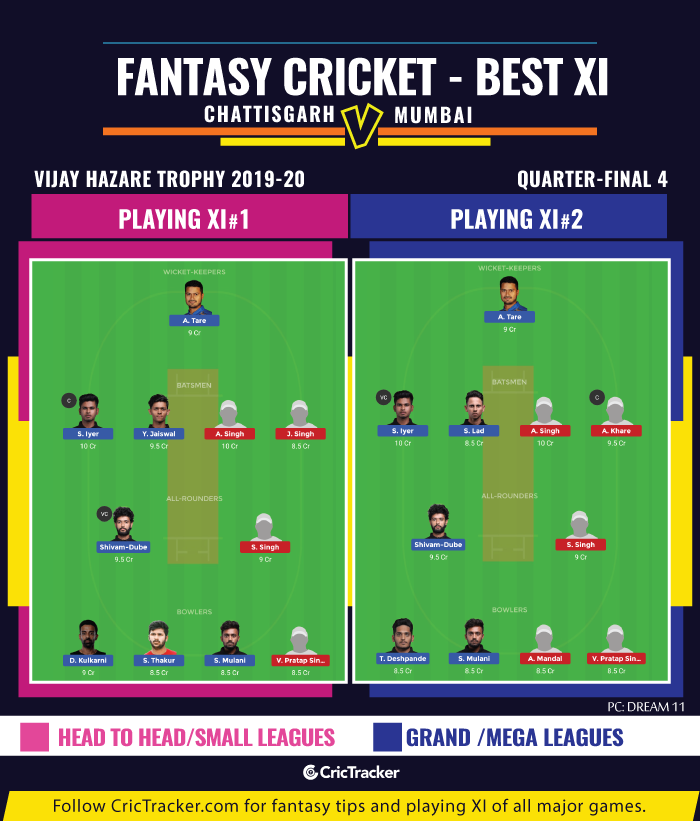 With this being a high scoring ground, top-order batsmen and finishers are crucial in the context of the Dream11 Fantasy with the likes of Shreyas Iyer, Shivam Dube and Amandeep Khare bound to score some runs on this surface.

Dhawal Kulkarni sprung back to form with a fifer against Jharkhand. Available at 9 credits, Kulkarni’s ability to swing the ball both ways makes him a dependable pick.

Mumbai is the favourites heading into this game against Chhattisgarh