Shreyas Iyer, Manish Pandey or any other? Who would be you captain for the clash?

The Round 10 Elite Group A and B game of the 2019-20 Vijay Hazare Trophy will be played between Mumbai and Karnataka at the M Chinnaswamy Stadium in Bangalore.

It’s time for game-time between two of the most in-form teams in the Vijay Hazare Trophy- Mumbai and Karnataka- in Bangalore. The hosts are unbeaten at home in the event after winning the last three times. The team, led by Manish Pandey, last beat Andhra by 53 runs and is high on confidence. Mumbai will need to be on top of their game in order to take down Karnataka in Bangalore.

Mumbai, on the other hand, haven’t had the worst of campaigns either. The start wasn’t a pleasant one for them as Chhattisgarh handed them a five-wicket defeat. Ever since, Shreyas Iyer and Co defeated Saurashtra and Goa, and are slowly climbing the ladder. The visitors have the best Net Run Rate of +1.934 and that shows their dominance since the shock defeat versus Chhattisgarh.

There will be chances of rain and thunderstorms from morning 9 AM itself. The clouds will be there and it won’t be a surprise if there are several interruptions. The temperature will be around the 22 and 28 degrees Celsius. The conditions will be humid with the numbers mostly in the 70s and 80s.

The pitch in the first three games turned out to be belters. And the teams, batting first managed to emerge victorious ever other time. But it’s pertinent to note that Karnataka was the defending team in all those games. Still, teams will wish to put runs on the board and then take it from there.

(Will be added when there’s any update)

Manish Pandey has been in awe-inspiring form of late. The Karnataka skipper has 342 runs at an average of 85.50 with a top score of 142*. He also has three half-centuries to his name.

Shreyas Gopal has been a genuine wicket-taker in the championship thus far. He has 11 wickets from five matches with best figures of 4/48 in the previous encounter versus Andhra. 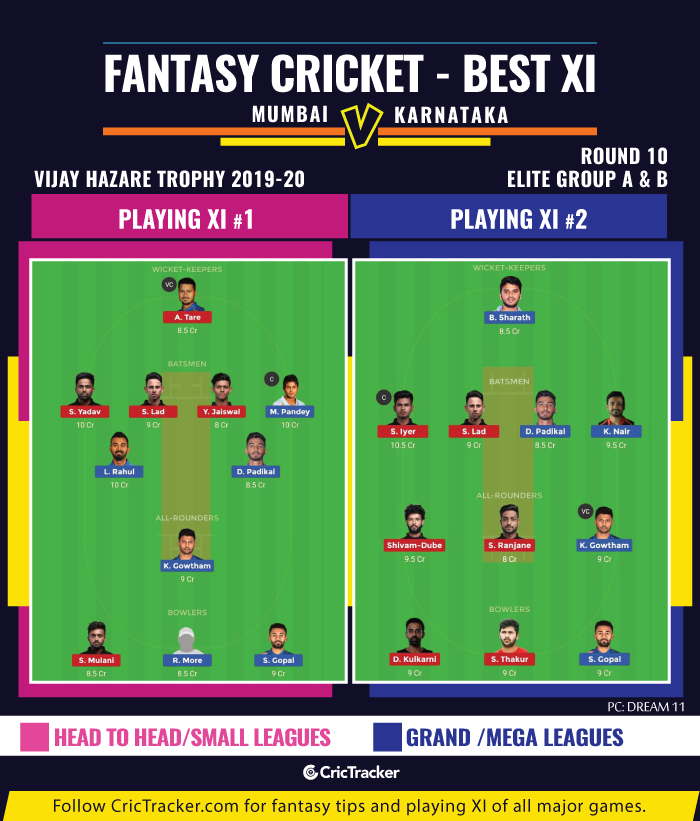 One can try and pick more batsmen, including all-rounders, due to the nature of the surface. Top and middle-order batters should be preferable.

Karnataka should be able to continue their wining streak at the Chinnaswamy.