Try and pick more bowlers from the team bowling first in your Dream11 Fantasy team.

The Round 11 Elite Group A and B game will take place between Delhi and Punjab at the Motibaug Cricket Ground in Vadodara.

Delhi and Punjab will face-off at the Motibaug Cricket Ground in Vadodara on Monday. Punjab is coming off victories over Baroda and Uttar Pradesh and are currently sitting pretty at the second position in the Elite Group A and B. They look destined to make it to the knockouts and another win will just confirm the same. Delhi, on the other hand, are enduring a forgettable season.

They have won only a couple of matches thus far and have lost to Uttar Pradesh and Vidarbha recently which hasn’t helped their cause. They are at the 12th place in the points table in the group and it looks extremely tough for them to jump into the top five to qualify for the quarter-finals. As of now, they will be looking to concentrate on this game in order to get the better of Punjab.

The forecast in Vadodara clearly suggests that there will be no rain on Monday. Clear skies will greet both the teams and the heat will only increase as the day progresses. The temperature will hover between 29 and 33 Degrees Celsius during the match.

The surface at the venue hasn’t been great for the batsmen this season. In nine matches so far, no team has crossed the 250-run mark yet and a similar surface could be on offer once again. Rather the team batting first has bowled out for quite a low scores. Expect the side winning the toss to chose to bowl.

Average first innings score: 178 (9 matches at the venue this season)

Shikhar Dhawan will be hungry to get a score big after a failure in the previous game. He will have to tackle the new ball though before going for runs later in the innings. He should be picked in the Dream11 Fantasy team. Nitish Rana is not known to be consistent but his ton in the previous match makes him a top pick.

Siddarth Kaul and Mayank Markande have been picking up wickets consistently for Punjab and they are likely to continue doing it. 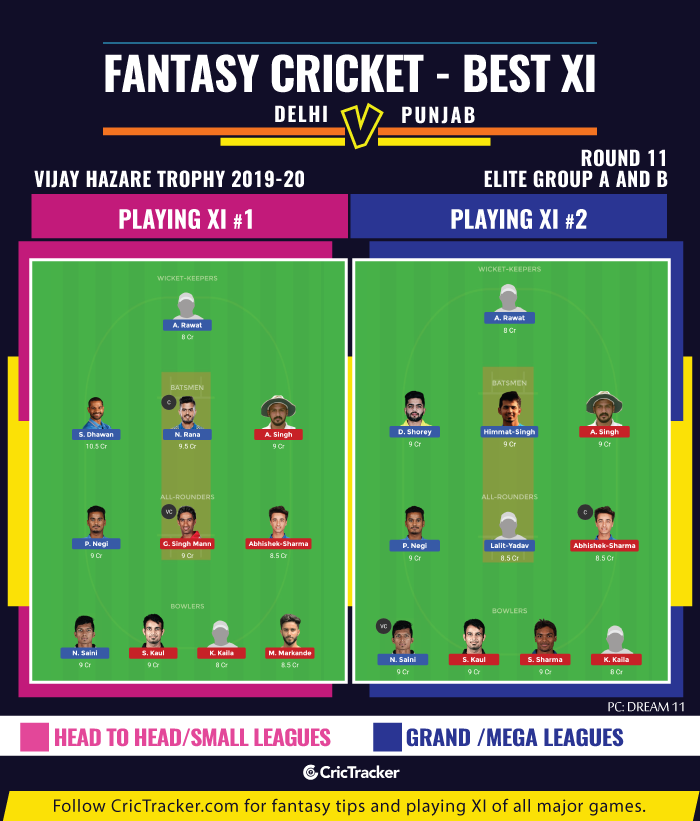 Wait for the toss to take place and playing XIs to come as there might be some changes in the teams.Also, try and pick more bowlers from the team bowling first in your Dream11 Fantasy team.

Punjab is expected to beat Delhi based on current form.