Satyajeet Bachhav picked up four wickets against Haryana with the ball and he is a good option to make VC in Grand leagues.

The Round 2 Elite Group A and B game will take place between Maharashtra and Himachal Pradesh at the Reliance Stadium in Vadodara.

Maharashtra and Himachal Pradesh will finally face-off on Sunday. Their clash was abandoned twice before due to relentless rains in Vadodara. However, this rescheduled game is expected to take place with the weather staying fair for the last few days. Himachal Pradesh are on a winning spree having won their last three matches comfortably after losing to Odisha in a rain-hit earlier in the season.

They are currently at the sixth position with 16 points to their name and are one of the favourites to make it to the knockouts. Maharashtra, on the other hand, can’t relent and after a good performance against Haryana, they will have to back it up with a similar show within 24 hours to give themselves a shot at making it to the top five.

October heat is hitting Vadodara after the unseasonal rains last month. The temperatures are expected to soar up to 37 Degrees Celsius in the afternoon and there is no chance of rain whatsoever according to AccuWeather.

Reliance Stadium in Vadodara is yet to host a full game this season. This could turn out to be the first full game played at the venue. There is no idea on how will pitch behave. With the sun beating down though expect the surface to break down soon. Two ODIs played last week between India Women and South Africa Women saw the ball spinning and the pitch was slow. Expect the team winning the toss to bowl first.

Prashant Chopra is a perfect pick as the captain for Dream11 Fantasy team as he more often than not scores big at the top and also rolls his arm over if there is purchase from the pitch. Rishi Dhawan is another important player for Fantasy teams who will definitely pick wickets with the ball and score quick runs down the order.

Ruturaj Gaikwad is yet to hit big but is a crucial player for Maharashtra. Satyajeet Bachhav was the pick of the bowlers and is one of the consistent performers which makes him important in Dream11 Fantasy team. 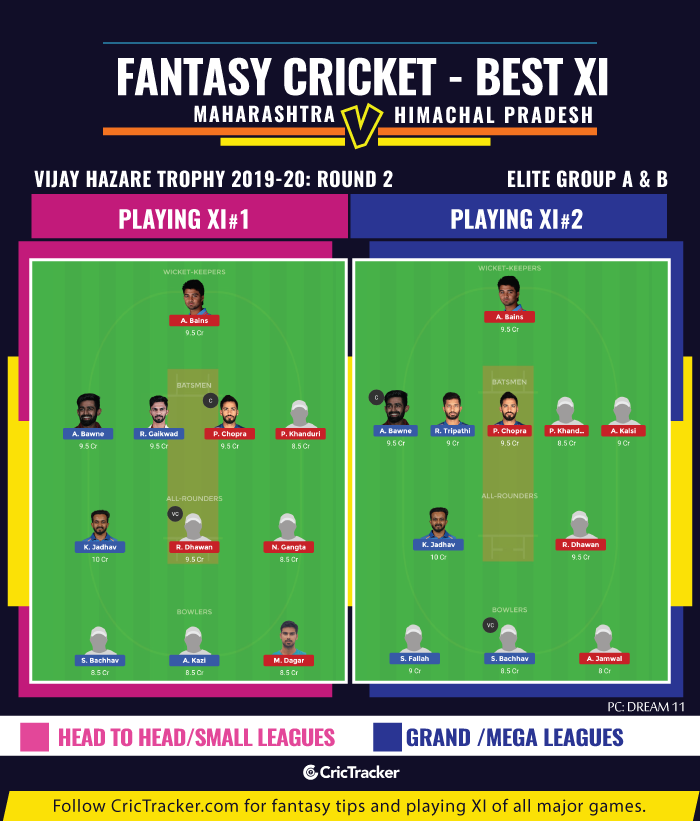 Both the teams might not tweak their playing XI much as this is a crucial game for them.

Satyajeet Bachhav picked up four wickets against Haryana with the ball and he is a good option to make VC in Grand leagues.

With the pitch expected to turn as the game progresses, it would be wise to pick more spinners in your Dream11 Fantasy team.

Expect Himachal Pradesh to continue their winning run but not without Maharashtra putting up a fight.