Krunal Pandya is expected to play a big role with his all-round ability and will be perfect as captain or vice-captain.

The Round 2 match in the Elite Group B of the Vijay Hazare Trophy 2019-20 will be played between Baroda and Uttar Pradesh at the Motibaug Cricket Ground in Vadodara.

Baroda and Uttar Pradesh faced off on the 2nd day of the tournament in a game which was called off after 20.3 overs. Shivam Mavi’s 3/9 and Ankit Rajpoot’s 2/17 left Baroda stranded at 91/8 before the game was called off. After this unfortunate end, the Uttar Pradesh team couldn’t take the field even once. They were supposed to be part of five games since then with all of them getting abandoned.

They will be hoping their first result-oriented game of the season will be against Baroda only as the game will be replayed. Baroda’s luck in escaping a defeat which was on cards didn’t last long. They were involved in two matches that produced results and lost in both of those. In the game against Delhi, Baroda were bowled out for 128; ten runs short of a revised target. Later, they lost to Haryana by 58 runs.

A bit of cloud cover is expected at the Motibaug ground on Monday. However, it won’t make an impact over the match as no rain is forecasted during the match.

The Motibaug Cricket Ground in Vadodara hosted plate group matches in the previous edition. Most of them turned out to be as the matches with scores of 250+ and less than 150. It won’t be right to judge the track based on those games. In general, this venue is pretty good for batting and we can see scores over 250 if the moisture doesn’t influence on the pitch.

Atit Sheth, Shivam Mavi and Ankit Rajpoot pick two wickets at an average every game and they become a must in the fantasy team. Samarth Singh and Kedar Devdhar can be picked as they are quite consistent. Akshdeep Nath has been UP’s best batsman when it comes to 50-overs cricket and also picks up a wicket here and there.

Krunal Pandya is expected to play a big role with his all-round ability and will be perfect as captain or vice-captain. 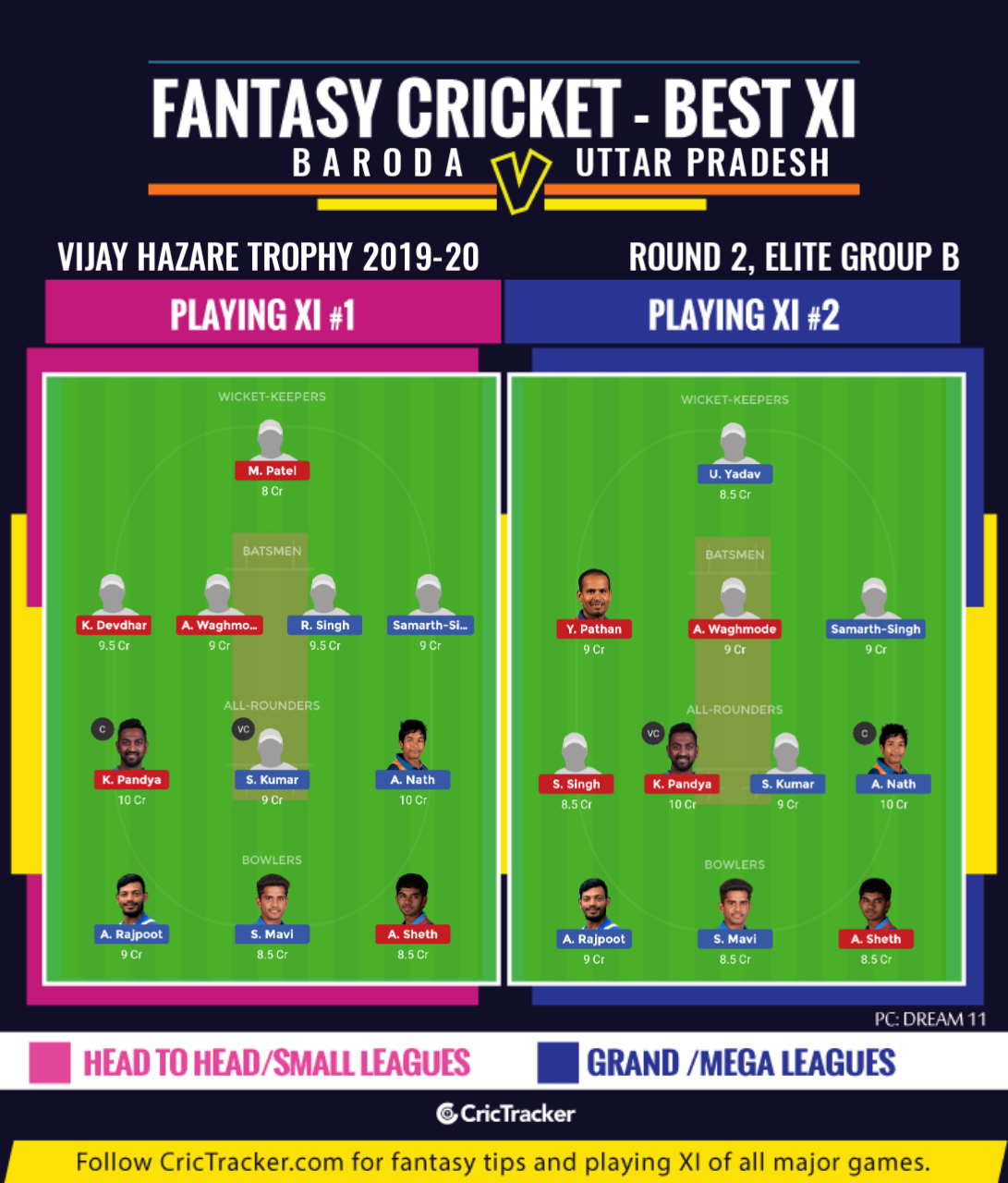 Both Baroda and Uttar Pradesh have got players with similar fantasy potential. The UP team is more of a young side while Baroda players have experience. All the players have excelled in their respective roles recently which makes fantasy selection tough. In our Suggested XIs, we have picked players who have performed the best in this season.