The Round 03 game of the Vijay Hazare Trophy 2019-20 Elite Group C will be played between Railways and Madhya Pradesh at the Jaipuriya Vidhalaya Ground in Jaipur.

As the caravan of the 2019 Vijay Hazare Trophy rolls on, Railways will square off against Madhya Pradesh in the Round 03 Elite Group C encounter in Jaipur. Riding on an all-round batting performance; one which was spearheaded by skipper Arindam Ghosh’s 96 and Vikrant Rajput’s 70, the Railways notched up a commanding total of 6-289 after 50 overs.

With the ball, it was Karn Sharma’s 3-23 that paved the way for an 84-run win for the Railways as none of the Bihar batsmen barring Shasheem Rathoure, who scored an unbeaten 86, could pose any resistance. Railways will now lock horns with Madhya Pradesh, who is coming off a 104-run shellacking at the hands of Tripura after their batters failed to put forward any challenge to the target of 269.

The weather at Jaipur continues to be inclement. According to the weather report, scattered thunderstorms are expected in Jaipur throughout Friday. While the maximum and minimum temperature will hover around 23-30 degrees, the humidity is expected to be 75 percent. There is a 40 percent chance of rain tomorrow between 11 AM and 4 PM.

This will be the third game that will be played at the Jaipuria Vidalya Ground in Jaipur. The wicket at the venue has been good, offering help to both fast bowlers and spinners while the batsmen have also scored runs. With Friday expected to be another rainy day, one can expect the fast bowlers to exploit the conditions on offer.

Average score: 261 (After two games in the season)

Railways: Arindam Ghosh (96) and Vikrant Rajput (70) were the cornerstones around which the Railways batting unit built the eventual match-winning score. They will once again be the key to their fortunes. Karn Sharma, who claimed 3-23 in the last game will lead the bowling unit along with Amit Kuila and Pradeep T.

Madhya Pradesh: For MP, none of their batters barring Rajat Patidar (41) could pose any resistance against Tripura. He will hope that experienced campaigners in Naman Ojha come to the party and contribute from the top. 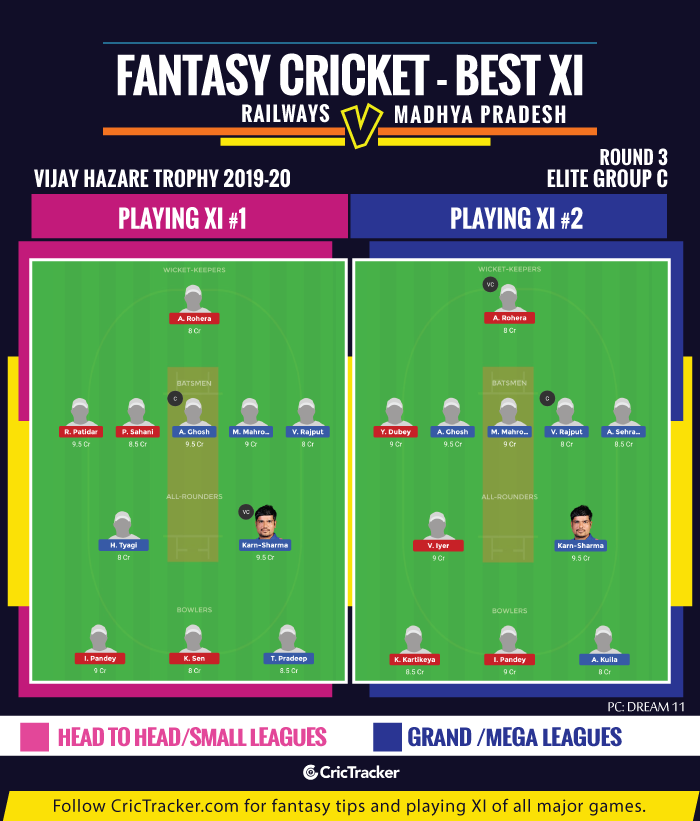 With rain expected to play a spoilsport, it will be prudent to pick more top-order batsmen in your Fantasy 11.